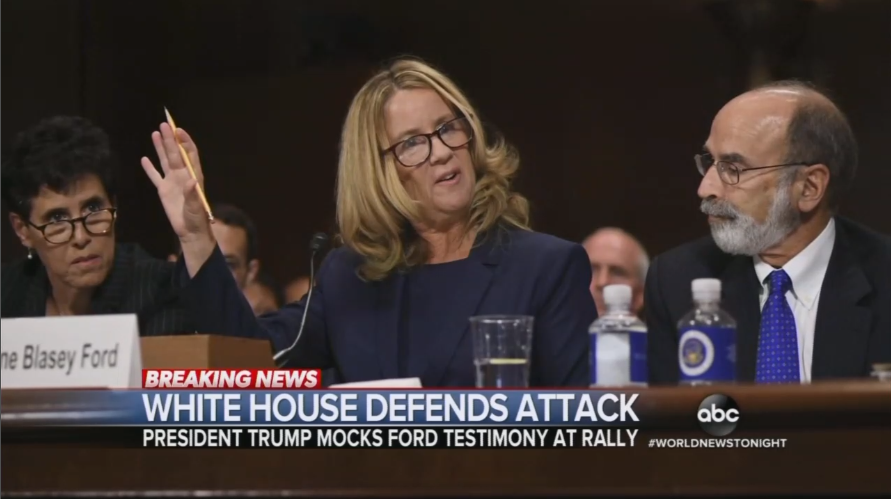 The liberal media were up in arms Wednesday after President Trump mocked Judge Brett Kavanaugh accuser, Dr. Christine Blasey Ford for having a poor memory at a rally in Mississippi the night before. But while they were perturbed by the act, ABC’s World News Tonight and the CBS Evening News begrudgingly admitted that Ford couldn’t remember many of the details surrounding that night. Despite that difficult admission, they failed to go into detail regarding the blatant contradictions in her testimony.

A small amount of credit was due to ABC and CBS for even mentioning Ford’s memory problems because NBC Nightly News avoided the topic altogether.

After playing a clip of herself in a contentious back and forth with White House Press Secretary Sarah Huckabee Sanders, ABC News senior White House correspondent Cecilia Vega noted that “Ford concedes she does not remember many details about the night in question.” But Vega touted how “when it comes to details about the alleged attack itself, she says her memory is crystal clear.”

“Ford also says she remembers the laughter between Kavanaugh and his friend Mark Judge,” she added.

In the midst of reporting on the three undecided GOP Senators who could sink the nomination, CBS White House correspondent Weijia Jiang brushed over Ford’s memory lapses. “The GOP can only afford to lose one of their votes if all the Democrats reject Kavanaugh. But all three Senators are undecided after hearing Ford's testimony, which did include some gaps,” she said.

Also during Wednesday’s broadcast, CBS finally got around to reporting on a letter reportedly from a former boyfriend of Ford’s who claims she lied about never coaching someone for a polygraph test, after ignoring it that morning. ABC has yet to touch this story.

But it seems that CBS may have been holding off reporting on the letter for an important reason: it was refuted Wednesday. “Ford's former roommate quickly issued this statement, ‘I have never had Christine Blasey Ford or anybody else help with any polygraph exam I have taken at any time,’” reported CBS congressional correspondent Nancy Cordes.

While these liberal broadcast networks were busy trying to make it appear as though Ford’s memory ‘gaps’ were restricted to the night in question, it was clear during the hearing she didn’t member things from just a couple months prior.

Ford testified that she couldn’t remember questions that were asked on the polygraph test she took or even who paid for it. One of her lawyers had to step in to testify that it was her law firm that covered the cost. And on the topic of lawyers, Ford didn’t know who was paying for hers. Again, a lawyer stepped in and told the Senate Judiciary Committee that they were working pro bono.

Then there was the Tuesday revelation from Real Clear Investigations (which went unreported by the networks) that found that Ford may have misled the committee on the link between her anxiety and home renovations.

According to the report, Ford told the committee that the second front door that she (along with her husband) added onto the house was to deal with her anxiety stemming from the alleged assault. It was to act as an emergency escape route. But the investigation found that the door was not used by Ford since it led to a part of the home meant for renters. Another home she owns had also undergone recent renovations and another door was not added.

While the liberal media acted as though they’re being fair by noting the ‘gaps’ in memory, they’re doing a disservice to viewers by ignoring the massive holes in the testimony.

CECILIA VEGA: It was just a couple of days ago that the President called Christine Blasey Ford a very credible witness, very credible, very compelling. But now he's basically making her out to be a liar. So, which is it?

SARAH HUCKABEE SANDERS: Certainly, the testimony by Dr. Ford was compelling, but you can't make this decision based on emotion, it has to be based on fact.

VEGA: Ford concedes she does not remember many details about the night in question. She says that's why she wanted an FBI investigation in the first place. But when it comes to details about the alleged attack itself, she says her memory is crystal clear.

DR. CHRISTINE BLASEY FORD: I went up a very narrow set of stairs leading from the living room to a second floor to use the restroom. When I got to the top of the stairs, I was pushed from behind into a bedroom across from the bathroom.

VEGA: Ford also says she remembers the laughter between Kavanaugh and his friend Mark Judge.

NANCY CORDES: Republicans, meanwhile, have stepped up their scrutiny of Blasey Ford, releasing this sworn statement from a man who said he was Ford's boyfriend for six years. He claims that despite her testimony, Ford "never expressed a fear of closed quarters," to him and that he once "witnessed Dr. Ford help” her roommate “prepare for a potential polygraph exam."

RACHEL MITCHELL: Have you ever given tips or advice to somebody who was looking to take a polygraph test?

CORDES: Ford's former roommate quickly issued this statement, "I have never had Christine Blasey Ford or anybody else help with any polygraph exam I have taken at any time."

WEIJIA JIANG: The performance did not sit well with three Republican Senators who will make or break judge Brett Kavanaugh's confirmation.

JIANG: And Alaska's Lisa Murkowski, who called the President's words "wholly inappropriate and unacceptable." The GOP can only afford to lose one of their votes if all the Democrats reject Kavanaugh. But all three Senators are undecided after hearing Ford's testimony, which did include some gaps.

FORD: I don't have all the answers, and I don't remember as much as I would like to.