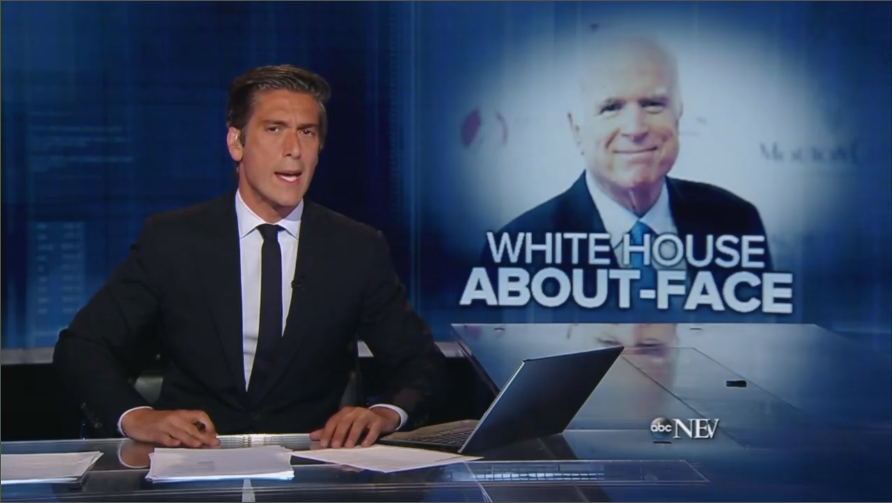 On Monday, the White House sparked controversy after the American flag atop the building was raised from half-staff before the remains of Senator John McCain were even in the Capitol. Also on Monday, the White House struck a brand new trade deal with Mexico that would end yet another theater in the administration’s trade wars and is said to help American businesses and consumers.

The former was part of a long-running political feud while the latter affected the lives of millions of Americans. Both ABC and CBS actually spent more time during their evening broadcasts on the feud than the end of a trade war. The announcement of the trade deal caused the stock markets to hit record highs but none of them thought it was newsworthy.

NORAH O’DONNELL: President Trump and Mexico's President today announced a preliminary deal to replace the North American Free Trade Agreement, which Mr. Trump has called a disaster for American workers. The new deal is aimed at encouraging more auto production in the U.S. and higher salaries for autoworkers. Canada is not included and won't be, according to Mr. Trump, unless it makes new concessions.

In stark contrast, each of those networks gave the feud between President Trump and the late Arizona Republican Senator three minutes and 32 seconds of airtime. That time made up a little more than 45 percent of World News Tonight’s total airtime dedicated to remembering McCain. For the CBS Evening News, it was a little more than 40 percent.

Unironically, CBS’s Bob Schieffer suggested this to O’Donnell: “This will not be a part of John McCain's legacy. This will be a part of Donald Trump's legacy.”

Almost putting the others to shame, NBC Nightly News actually dedicated more time to the new trade agreement than the Trump/McCain flag flap. They spent one minute, 39 seconds on the trade agreement compared to the one minute, 13 seconds for the feud. And their focus on the political squabble only accounted for 21 percent of their total McCain remembrance coverage.

NBC “almost” put the others to shame because while they did spend more time on the deal, they sounded skeptical about its future and its effectiveness.

And on top of that, none of the networks mentioned how news of the trade deal caused the stock markets to rally and hit record highs. “Stocks jumped on Monday as the United States and Mexico closed a new trade deal, potentially removing a source of uncertainty that had been plaguing investors for months,” reported CNBC.

“The S&P 500 gained 0.8 percent to close at 2,896.74 — a record high — with materials and financials as the best-performing sectors,” they added. “The Nasdaq Composite climbed 0.9 percent to an all-time high, breaking above 8,000 points for the first time…” To round out Monday's stock market numbers, the Dow Jones also ended the day up 259.29 points.