Since the House Intelligence Committee, chaired by Congressman Devin Nunes (R-Calif.), voted on Monday to release a memo detailing alleged misconduct and legal abuses by the FBI, the three major broadcast networks (ABC, CBS, and NBC) have been acting like the mouthpiece for the Democratic Party. Between January 29 (when the vote was held) and February 1, the networks dedicated roughly three and a half times the coverage to worries about releasing the memo than the allegations against the FBI.

During this time frame, the network evening newscasts dedicated a whopping 17 minutes and 20 seconds of airtime to Democratic Party talking points and FBI pleas not to release the memo. In sharp contrast, they only spent four minutes and 54 seconds on the content of the memo, which included allegations of misconduct during the early days of the Russia investigation and abuse of FISA warrants. 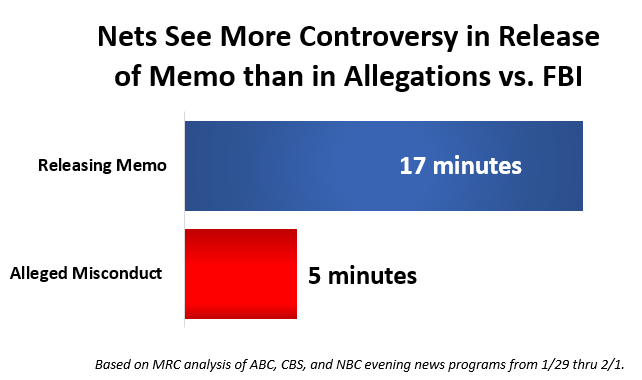 In the run-up to the Intelligence Committee vote, the nets were largely silent as Democrats were insisting that those on social media calling for the memo to be released were Russian bots. And on the day of the vote, ABC and CBS seemed to be still downplaying the memo since they didn’t report on the vote at all while NBC Nightly News dedicated a solid two minutes to the story, with only 36 seconds going to the allegations and the rest going to fears about it being released.

On Tuesday night prior to the State of the Union address, the tide shifted and all three networks were loading up on opposition to releasing the memo. ABC donated two minutes, 25 seconds to opposing the memo's release, while CBS chipped in one minute and 31 seconds. What about NBC? The peacock network spent one minute and 13 seconds on this narrative. And as for the allegations against the FBI, they were largely dismissive and none of them broke a minute of airtime, with ABC at 51 seconds; CBS at 37 seconds; and NBC at 20 seconds.

Along with barely touching on the allegations, NBC White House Correspondent Peter Alexander pushed fake news about the memo in the form of a debunked smear: “Tonight, the transcript of a closed-door House Intelligence Committee meeting this week shows the Republican chair, Devin Nunes refused to answer whether the White House worked with anyone on his staff as they put that memo together.” But as The Federalist’s Mollie Hemingway expertly pointed out, the transcript proved the exact opposite.

Word came on Thursday that President Trump had read the memo and was strongly considering releasing it, which perhaps explained why the networks had more coverage. ABC kept up the heavy opposition to the memo with two minutes and 48 seconds vs. 40 seconds of allegations. CBS stayed consistent with one minute, 34 seconds of memo pushback to 44 seconds to allegations. NBC had bizarrely dedicated only 38 seconds to the story altogether, with only seven seconds going to the allegations.

And with momentum building on Thursday to release the memo, ABC and CBS amped up the dire tone by harping on the FBI’s “grave concerns” and peddled rumors that FBI Director Christopher Wray might resign.

During World News Tonight, ABC White House Correspondent Jon Karl highlighted a clip of himself shouting questions to Trump as he walked by the press: “Mr. President, what about the FBI director's grave concerns? Don't you trust him?” And CBS News Justice Correspondent Jeff Pegues ended his segment on the Evening News by touting an obnoxious tweet by former FBI Director James Comey. "‘American history shows that in the long run, weasels and liars never hold the field so long as good people stand up.’ That is a reflection of how intense this controversy has now become,” he chided.

The Nunes memo leveled serious allegations of misconduct against officials at the FBI's high levels, and it’s argued that the release of the memo was needed for proper oversight. But the liberal media were not interested in transparency and accountability. Many in the media have argued a hands-off approach to let the Inspector General’s investigation run its course. Yet, they don’t share that same mindset with the Russia investigation that they say is bearing down on Trump.