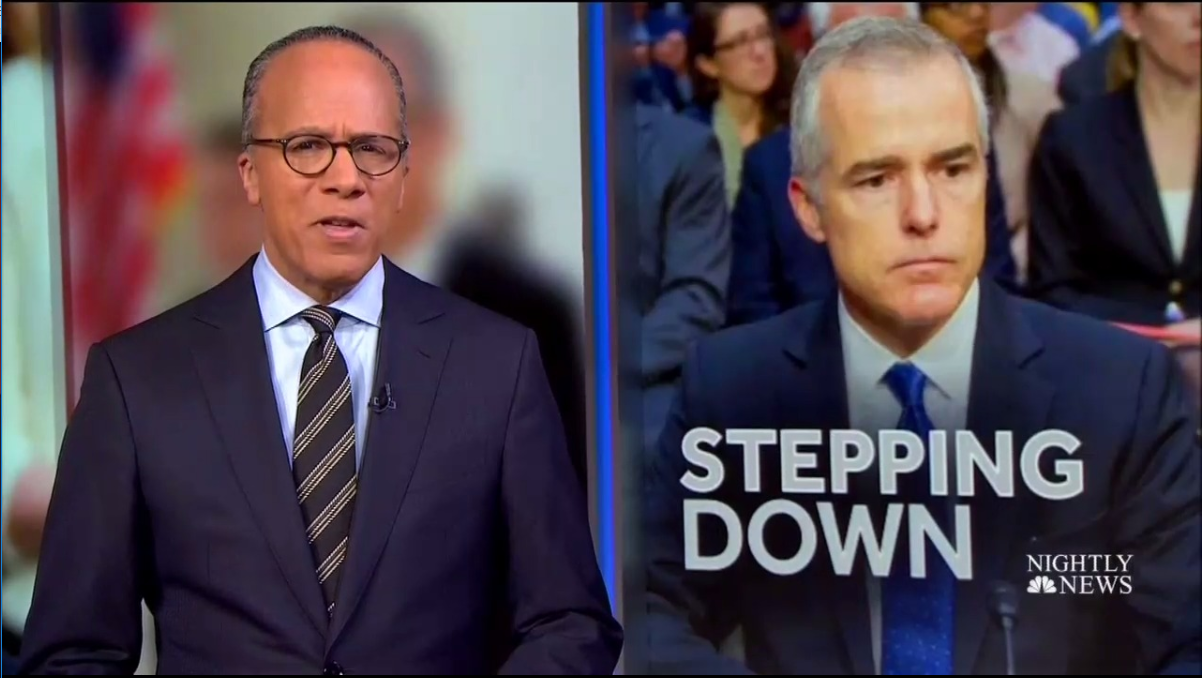 The FBI was caught off guard Monday when Deputy Director Andrew McCabe decided to kick off his retirement early and resigned his post with little fanfare. Speculation swirled over why he chose that day to call it quits but the liberal networks (ABC, CBS, and NBC) decided only one person was really to blame: President Trump and his desire to obstruct justice. That despite the fact that other close sources cited a harsh Inspector General investigation report coming down the pike.

The three major liberal networks were eager to place all the blame on the President as each one lead their evening broadcasts with the news. In all, they spent a total of nine minutes and 48 seconds on McCabe’s resignation. Six minutes and 28 seconds of that total time was dedicated to claiming Trump’s criticism, including tweets, was to blame for his early departure. In sharp contrast, they only allowed one minute and six seconds to the notion he was forced out due to the IG report.

ABC’s World News Tonight had the largest disparity between the two coverage times by far, which was due to them not running one but two reports on the subject: three minutes and 33 seconds on blaming Trump versus 19 seconds on the Inspector General’s investigation. “And we begin tonight with the sudden departure of FBI Deputy Director Andrew McCabe, the number two man at the FBI, and a frequent target of the President's criticism,” declared anchor David Muir right at the top of the show.

Senior Justice Correspondent Pierre Thomas couldn’t be bothered to mention the IG investigation in his report. He only mentioned it after being asked about it by Muir as he was wrapping up the segment. “Sources are telling us tonight, McCabe was getting indications that an upcoming Inspector General report dealing with both the Hillary Clinton probe and Russia was likely going to be rough on him. He decided to leave so as not to be a distraction,” Thomas quickly explained.

ABC followed it up with an entire report dedicated to the White House denying they played a role in McCabe’s resignation. During that segment, White House Correspondent Cecilia Vega pushed the liberal narrative that it was a part of Trump’s plan to obstruct justice. “In the midst of this Russia investigation, is President Trump pressuring his top law enforcement officials out of the job, and David, does this amount to obstruction,” she speculated.

CBS Evening News was the quickest to mention the role the IG’s report might have played, but they still only gave it 23 seconds contrasted to the one minute and 48 seconds for blaming Trump. They spent all that time blaming Trump despite Justice Correspondent Jeff Pegues beginning his report by noting: “Sources tell CBS News FBI Deputy Director Andrew McCabe was strongly encouraged to step down and the investigation into the Clinton private e-mail server may have played a role.”

NBC Nightly News spent the most time on the IG report with a whopping 24 seconds of airtime, to Trump blaming’s one minute and 27 seconds. According to Justice Correspondent Pete Williams, “friends and co-workers tonight tell NBC News two factors”: Trump and the IG report. And they spent all that Time on Trump despite Williams admitting:

Friends say perhaps the biggest reason for McCabe’s leaving now is that the Justice Department’s Inspector General will soon issue a report expected to strongly criticize how the FBI handled the Clinton e-mail investigation, including his role.

In addition, Spanish-language network Univision spent only 24 seconds of its evening news on the subject of the resignation, and did not mention the IG report as a possible factor, while Telemundo did not report on McCabe's exit at all.

If Deputy Director McCabe was forced out due to the findings of the FBI’s Inspector General, it lends credibility to the idea that something was amiss at the bureau during the Clinton e-mail investigation and the beginning of the Russia probe. And despite CBS’s Pegues noting that “[FBI] Director Christopher Wray mentioned the results of an Inspector General review of that probe and said the FBI must perform at the highest standards,” the liberal media were still stuck on blaming President Trump for everything.