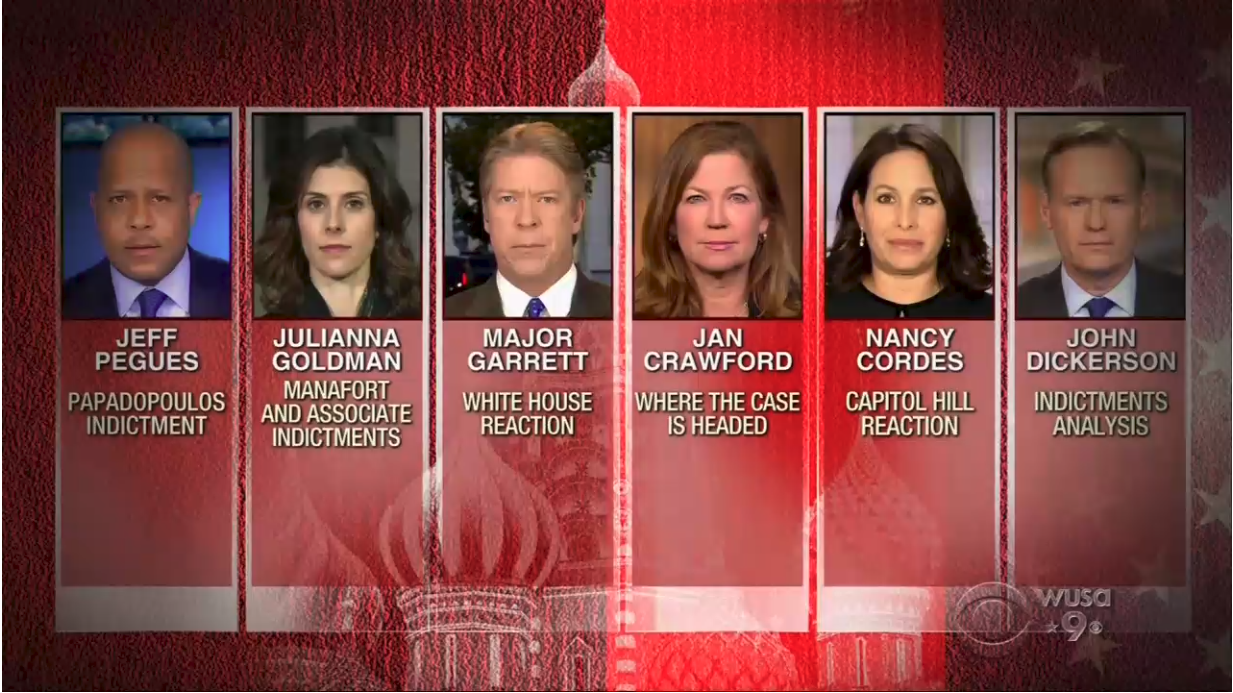 On Monday, the anticipated indictments of former Trump campaign chairman Paul Manafort and deputy chair Rick Gates were handed out by Special Counsel Robert Mueller. And it sucked up most of the oxygen in much of the news media. Many of the 24-hour cable news channels ran wall-to-wall coverage with hordes of the airtime used to recycle the same speculation hour after hour. There was little difference during the evening broadcasts of the Big Three Networks (ABC, CBS, and NBC), where they spent almost 60 percent of their total airtime on Russia news.

Both Manafort and Gates were indicted on money laundering charges and for failing to register as foreign agents for their lobbying work on behalf of Ukraine. In addition, it was revealed that Trump campaign adviser George Papadopoulos lied to federal investigators about communications with Russians. The indictments were a major development in the Mueller’s investigation, but in their coverage, the networks were giddy that the charges could lead to President Trump as they made false connections and ignored other aspects.

Spanish-language giants Univision and Telemundo also devoted a large chunk of their national evening newscasts (to the tune of 14 minutes and 54 seconds, between them) to the indictments. All these numbers excluded network teasers and commercials.

CBS Evening News dedicated the largest amount of time to Russia related news of the day at 13 minutes, 33 seconds. Their total airtime for news was 18 minutes, 45 seconds, this meant Russia made up 71 percent of their total airtime. It could have been worth it if they had used the time wisely.

In their first of seven segments on the matter, Justice correspondent Jeff Pegues tried to conflate unsuccessful attempts by Papadopoulos to set up meetings with Russians to the meeting in Trump Tower. “Court papers say the Trump campaign rebuffed requests, but on July 14th, Papadopoulos told the Russians a meeting has been approved from our side. That meeting never happened, but others did, including on June 9th in Trump Tower…” The problem? Papadopoulos didn’t set up that meeting.

The network also failed to mention that Mueller was also investigating Tony Podesta for his undeclared lobbying for Ukraine, just like Manafort. Tony Podesta was a powerful Democratic lobbyist and the brother to Hillary Clinton campaign chairman John Podesta, who stepped down from his own company amid the investigation.

ABC’s World News Tonight came in second with 69.6 percent of their total airtime being take up by Russia news. Out of their total 17 minutes and 50 seconds of news time, they spent 12 minutes, 25 seconds on Russia. But they, unlike CBS and NBC, actually ran a segment (a 22-second news brief) about Tony Podesta.

But ABC was also very excited by the idea that Mueller was one step closer to getting that big Donald Trump fish. “It is the biggest break in the case yet. The strongest evidence yet of possible collusion, with details of how this Trump campaign adviser, 30-year-old George Papadopoulos,” exclaimed Brian Ross.

For NBC Nightly News, their times were inverted. Only seven minutes 25 seconds for Russia news out of 18 minutes 49 seconds for total news time, that means they only spent 39 percent of their total airtime on Russia. But they, like CBS, didn’t mention Mueller’s investigation into Tony Podesta.

All the networks regarded any mention of the Hillary-Uranium scandal and Clinton/DNC connection to the Russia dossier as a futile attempt to “distract and deflect” focus away from the indictments, as if investigators and journalist couldn’t look at both.