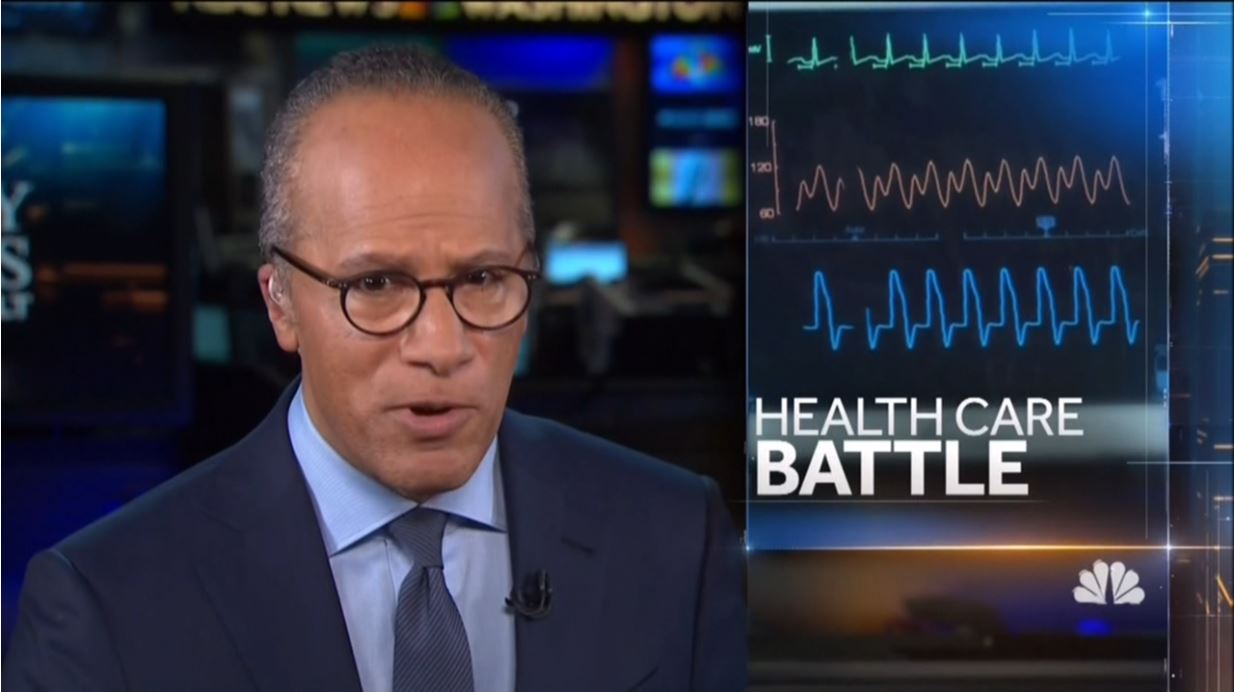 Members of the Republican leadership on Capitol Hill rolled out their replacement for ObamaCare on Tuesday, and it immediately drew fire from both the left and the right. But you really wouldn’t know that if you watching NBC Nightly News that evening where their main concern was that of the liberals. The network allowed two minutes five seconds to slamming the bill from the liberal perspective while giving a mere five seconds to conservatives. And they mischaracterized their position entirely.

“Tonight Republican leaders are defending their plan from fiscal conservatives who complain it's too generous,” was all reporter Tom Costello said about the conservative position on the bill. He didn’t even get a quote from any conservative member of Congress who was opposed to the bill. They even held a press conference which he could have pulled a clip from.

Yet, Costello included a clip of Senate Minority Leader Chuck Schumer, who declared, “TrumpCare means higher cost for less health care. Plain and simple.” He also interviewed a George Washington University professor, who claimed that “The losers in this are lower income people who need financial assistance to be able to buy coverage that’s affordable for them.”

The NBC reporter himself got into the act, reporting on “Another controversy, Republicans want to freeze Medicaid enrollment for low-income Americans in 2020. Freeze it, then give states money to pay for the coverage. But many analysts say it won't be enough.”

In contrast to Costello, on CBS Evening News, Nancy Cordes ran two clips from the conservative opposition press conference. Anchor Scott Pelley even led into the segment with a nod to the conservative position. “Today President Trump praised the new Republican replacement for ObamaCare as ‘Wonderful,’” he announced, “But it was a dead letter to conservative Republicans who said that it broke promises that they made to the voters.”

Although, Cordes did scoff at the conservatives’ reason for opposing the bill. “They're balking at the bill's tax credits, which are designed to help low and middle-income Americans buy insurance,” she reported. And she took a jab using Democratic Party talking points: “Democrats argue older, lower-income Americans will hate it more than anyone. Some of them could see their ObamaCare credits cut in half, Scott, even as the wealthiest Americans enjoy a series of tax cuts under this plan.”

And even though ABC’s World News tonight was in the middle in terms of balance, reporter Mary Bruce included a ridiculous clip of herself asked House Speaker Paul Ryan if he found it acceptable to have 10 million people lose their insurance.

So even with NBC giving conservative criticisms the least amount of time, the other members of the Big Three still managed to get in their punches.

LESTER HOLT: Now to the intense battle that raging over health care. After years of trying to repeal ObamaCare, Republicans have now released their own replacement plan. But the new proposal is already taking fire and not just from Democrats. Meantime, a lot of Americans are wondering what does it mean for us? Here’s NBC’s Tom Costello with some answers.

TOM COSTELLO: Tonight it's clear certain elements of Obamacare are here to stay. People with pre-existing conditions will still be able to buy insurance. Children 26 and under can stay on their parents’ insurance. And there will be no lifetime maximum on insurance benefits. But for anyone who pays for ObamaCare coverage, many more questions. In Knoxville, musician Gray Comer is scraping by on less than $30,000 a year. Born with a painful debilitating skin condition, he receives roughly $4,200 a year in subsidies to pay for insurance. Under the Republican plan he would get $3,000 in tax credits to buy insurance. But he only pays $1,000 in federal taxes. The government would give him a check for the balance.

GRAY COMER: I don't really see a tax credit as being enough to offset the cost of buying insurance on the private market. 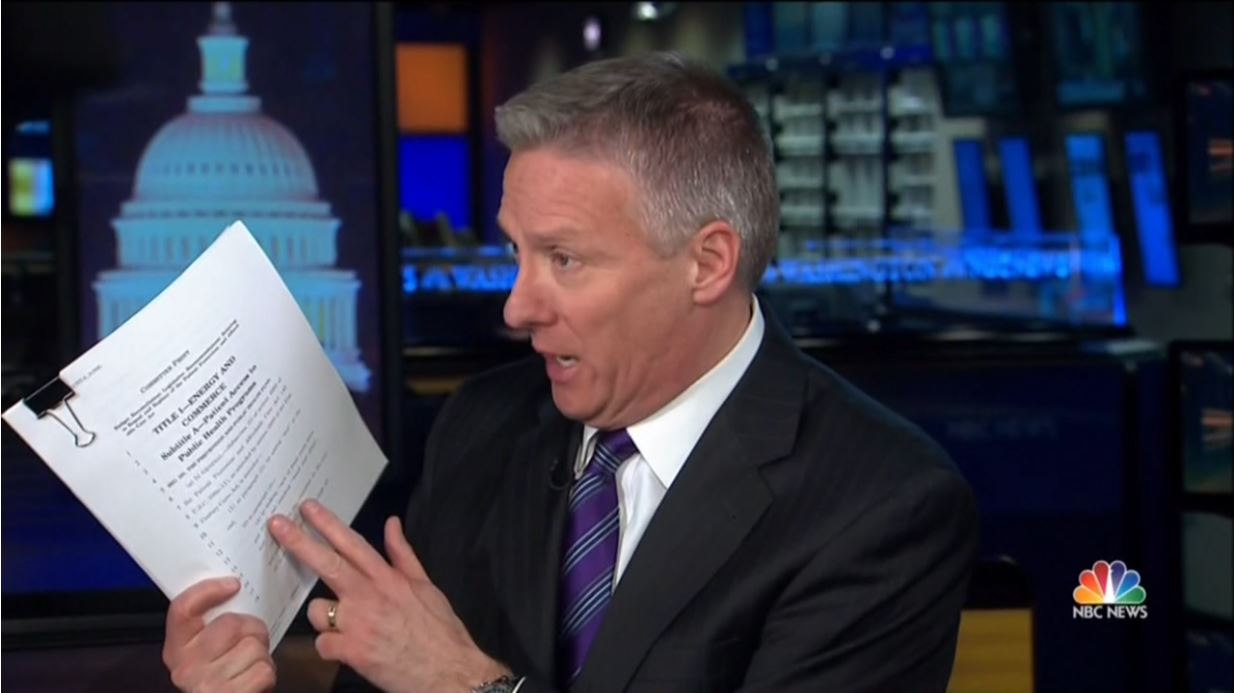 COSTELLO: Under the Republican plan, anyone 30 and under would get a $2,000 tax credit. 60 and older would get $4,000 credit. There's no requirement to buy insurance but to encourage people the plan would impose a 30 percent penalty on anyone who lets coverage lapse. That means a family with $10,000 premiums could pay another $3,000 penalty.

SARA ROSENBAUM: The losers in this are lower income people who need financial assistance to be able to buy coverage that’s affordable for them.

COSTELLO: Another controversy, Republicans want the freeze Medicaid enrollment for low income Americans in 2020. Freeze it, then give states money to pay for the coverage. But many analysts say it won't be enough.

PAUL RYAN: This is the American Health Care Act.

COSTELLO: Tonight Republican leaders are defending their plan from fiscal conservatives who complain it's too generous and Democrats who say average Americans will pay the price.

DONALD TRUMP: It's a complicated process but actually it's very simple. It's called good health care.

COSTELLO: Vice President Pence said today, Republicans are open to negotiating changes to the plan but there's big opposition in Republican circles not to mention among Democrats and still no estimate on what this plan will cost, Lester. And right now this plan appears to be in trouble even among Republicans.

HOLT: A lot to work at. Tom, thanks very much, appreciate it. 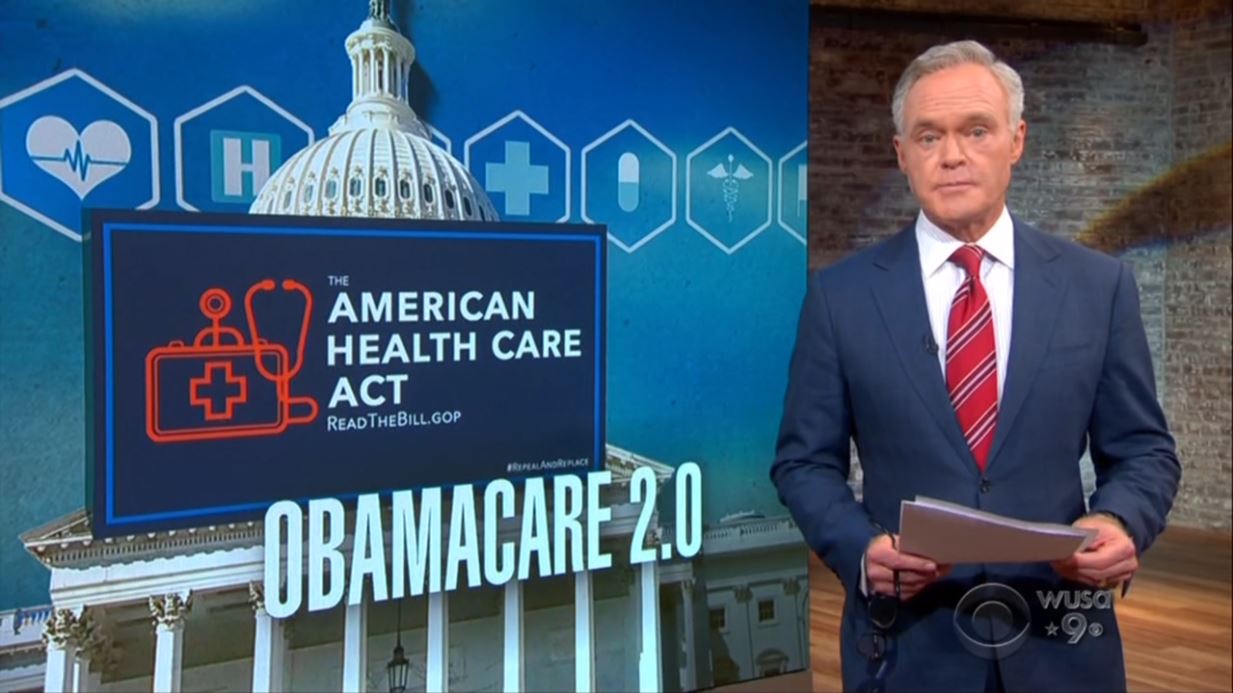 SCOTT PELLEY: Today President Trump praised the new Republican replacement for ObamaCare as "Wonderful." But it was a dead letter to conservative Republicans who said that it broke promises that they made to the voters. Mr. Trump said last week “nobody knew that health care could be so complicated.” Turns out the same is true about Capitol Hill, where we find Nancy Cordes tonight.

TRUMP: I think really that we're going to have something that's going to be much more understood and much more popular than people can even imagine.

CORDES: Conservative lawmakers understand it, but some of them just don't like it.

MARK MEADOWS: Obviously we have some serious concerns.

CORDES: They're balking at the bill's tax credits, which are designed to help low and middle-income Americans buy insurance. The credits range from $2,000 to $14,000 a year depending on age and family size. Kentucky's Rand Paul called it ObamaCare light.

RAND PAUL: We're united on repeal, but we are divided on replacement.

CORDES: Republican leaders pushed back, noting that the plan meets party goals like scrapping the individual mandate and repealing taxes on the health care industry.

CORDES: But some key details are still missing, like how much the new bill will cost. How are you telling your members that this bill will be paid for?

CORDES: But isn't that pretty integral? I mean, if you don't pay for the plan with taxes, what are the alternatives?

MCCONNELL: As I said, we'll be looking at the whole proposal here. We'll have ample time to answer all the questions.

MIKE PENCE: We're certainly open to improvements and to recommendations.

CORDES: There will be no sales pitch to Democrats, who made it clear today where they stand.

CHRIS MURPHY: Well, TrumpCare is here, and you are going to hate it.

CORDES: Democrats argue older, lower-income Americans will hate it more than anyone. Some of them could see their ObamaCare credits cut in half, Scott, even as the wealthiest Americans enjoy a series of tax cuts under this plan.