Slate Claims Trump Is in Racist ‘Duet’ with Mass Murderer 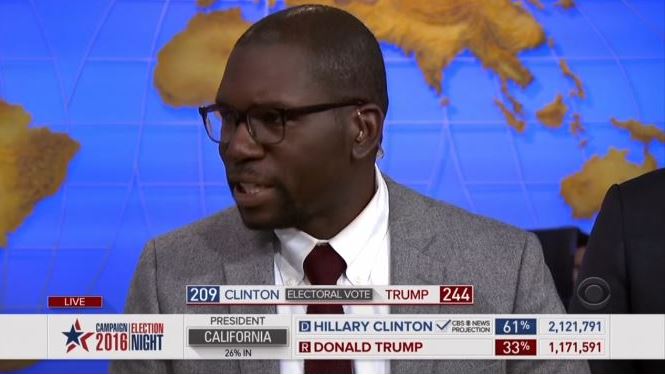 He rambled on about how both Trump and Roof shared a disdain for minorities, using Trump’s comments on Hispanics and the inner cities to draw his parallels. Bouie ranted about how they were "brothers in white resentment:"

“Trump wanted to “make America great again,” where “America” was a metonym for a traditional, industrial, and white America, set against a rising tide of racial threats, from Hispanic immigrants and black protesters, to Muslim refugees and the specter of “radical Islamic terrorism.” … Roof, in his own telling, wanted to awaken white America to the alleged threat of blacks and other nonwhites.

“Thursday, Roof was found guilty of hate crimes and other charges by a federal jury, and Donald Trump is president-elect of the United States,” he stated, while arguing that they both surrounded themselves with racist thought.

He admitted that to the average American the two are barely related, but argued that that was not nuanced enough understanding, “These ideas were once marginal. But in the past year, they’ve been pulled into the mainstream by Trump and his presidential campaign. Trump has broadcast racial propaganda and anti-Semitic messages…”

“Roof’s depiction of black Americans as violent and dangerous is just a few steps away from Trump’s depiction of black communities as violent and dangerous hellscapes that threaten the safety of the entire nation,” Bouie continued to hound. He then admitted that Trump’s candidacy did not lead to Roof murdering nine African-Americans in their church. But according to Bouie “Their temporal proximity reveals thematic connections between the two.” He then tried to discredit Trump’s presidency:

Trump embodies a white reaction to perceived decline in a changing world, then Roof represents that backlash in its most extreme and virulent form. Both Roof’s violence and Trump’s demagoguery flow from a shared swamp of resentment. The same white nationalists who led Roof down a path of hate and evil now gather in Washington, D.C., to celebrate the election of Trump as a triumph for their movement.

Bouie seemed to go completely off the rails as he attacked American voters for electing Donald Trump President of the United States. “We honored the sacrifice of the dead, we asked God for guidance, and we took the Confederate flag down from its perch on South Carolina’s capitol…Then, just 16 months and a few days later, we gave Donald Trump the White House,” he chided, as he slammed voters for not learning from history.