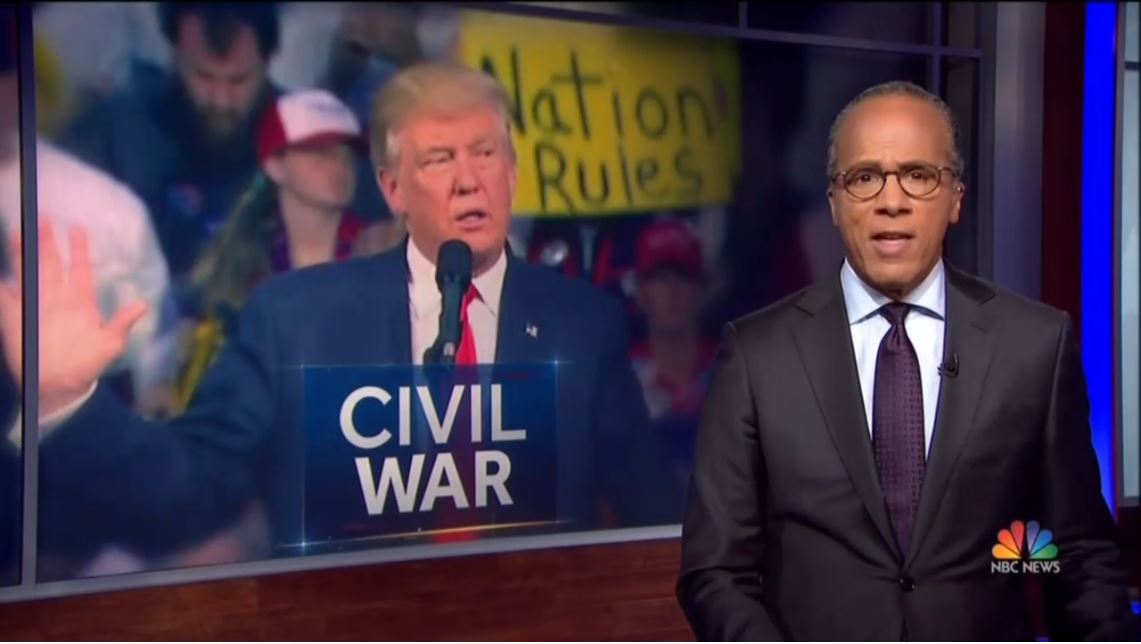 Following the leaked tape of GOP presidential candidate Donald Trump making lewd comments about women over the weekend, members of the Republican Party started to distance themselves. And NBC seemed quite giddy about it as they kicked off NBC Nightly News Monday with “Civil War” emblazoned across the screen. As if he was announcing the latest Marvel blockbuster, anchor Lester Holt declared, “With Donald Trump's fortunes fading over his lewd comments about women, a GOP civil war has broken out.”

“Tonight, abandonment and astonishment as the country's top Republican walks away from the top of his ticket,” hyped NBC’s Hallie Jackson at the start of her report. She would go on to parade out naysayers to declare the GOP was in freefall:

DAVID WASSERMAN: It's time for Republicans to hit the panic button, because trump could drag them into the political abyss…

Jackson even claimed, “Our new polling shows more voters want Democrats to control Congress by the widest margin since 2013.” The NBC reporter lied and stated that the Republican National Committee was “silent” on Republicans denouncing Trump’s comment.

But according the CBS’s Julianna Goldman that is far from reality, “One group that is sticking by Trump is the Republican National Committee, which also said today that it will still provide money and other resources to the Republican nominee.” But Goldman’s CBS Evening News report hyped the “GOP civil war” just as much as Jackson’s.

Goldman seemed almost excited as she went into detail about how little Democrats needed to do to win back control of both Congressional chambers. “Democrats need 30 seats to take control of the House and just five seats to win back the Senate,” she said, ignoring the historical difficulty of taking a seat from an incumbent Senator.

The CBS reporter touted how Democrats were pouncing and running ads attacking Republicans for not ditching Trump sooner. She even went so far as to showcase an ad against Ohio Republican Senator Rob Portman crafted by his opponent Ted Strickland. “Where did you stand on Joe McCarthy? George Wallace? This is one of those moments,” the ad said, “History will judge Rob Portman a coward,” far from an impartial reporting of the ad campaign.

It is one thing to report that there is discontent within a party, but it’s another thing to take pleasure in it. It is clear that the liberal networks take pleasure in the GOP’s infighting because this is not how they report on Hillary Clinton’s struggle to lasso Bernie Sanders’ supporters. Back in May both CBS and NBC attacked Sanders supports’ for protesting at the Nevada Democratic Convention after being steamrolled by party insiders for extra delegates. Both networks used party talking points to label Clinton’s opposition as having a “penchant for actual violence.”

LESTER HOLT: Good evening. 29 days until Election Day, and our new poll numbers out tonight speak to the urgent crisis exploding inside the Republican Party from the top down. With Donald Trump's fortunes fading over his lewd comments about women, a GOP civil war has broken out. At its center, party loyalty versus self-survival. The crisis underscored by a new NBC News/Wall Street Journal poll taken after the controversy broke and before last night's debate. It shows Hillary Clinton now with an 11-point lead over Trump nationally among likely voters. NBC's Hallie Jackson has late details. 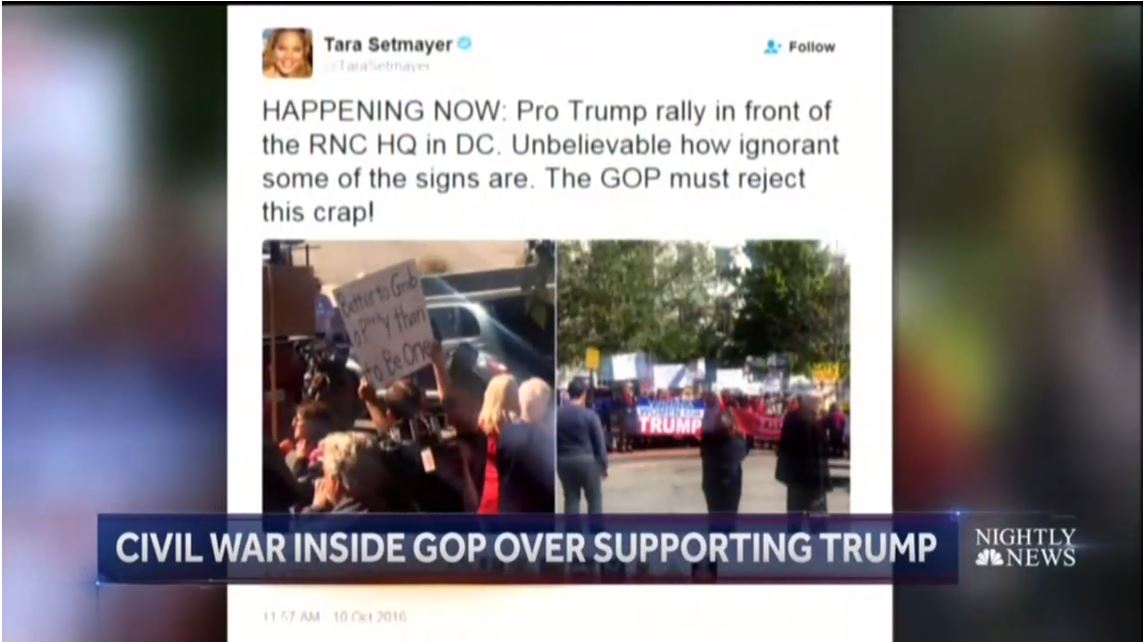 HALLIE JACKSON: Tonight, abandonment and astonishment as the country's top Republican walks away from the top of his ticket. House Speaker Paul Ryan telling his colleagues on a conference call, he won't defend Donald Trump anymore, won't campaign for him. Essentially conceding Trump won't win. Sources on the call revealing Ryan was forced to reiterate he won't unendorse Trump after facing backlash from angry House members.

PETER KING: I think we came away pretty united.

JACKSON: How do you talk about unity when the House Speaker isn't going to campaign with or defend the party's nominee?

KING: Well, he's still endorsing him, and it’s a very unusual year and I think Paul Ryan is trying to make the best of a very difficult situation.

JACKSON: Ryan's making official what it appears he'd been doing all along. Focusing only on saving GOP control of congress. Even as Trump today tweeted Ryan shouldn't waste his time on fighting the Republican nominee. Senator Richard Burr, up for re-election in North Carolina, won't, betting it's better to stick by Trump's side.

RICHARD BURR: If we don't allow somebody to be forgiven, who's going to forgive us?

JACKSON: All of it illustrating the GOP dilemma. Go against Trump and risk the wrath of his base, or back him and hope to hang on he loses. Now, growing fears it's not just the Senate in danger, but the House too.

DAVID WASSERMAN: It's time for Republicans to hit the panic button, because trump could drag them into the political abyss.

JACKSON: The Republican National Committee, silent so far, but outside its headquarters, a graphic display of the GOP divide. At a small protest, a reference to Trump's 2005 comments about grabbing women's genitals. “Better to grab one, than be one.”

Our new polling shows more voters want Democrats to control congress by the widest margin since 2013. But the Republican Party is still standing by its nominee. Late tonight, NBC News has learned, privately reassuring its members of its great relationship with team Trump. Lester?

SCOTT PELLEY: With the Speaker of the House dumping Trump today to campaign for conditional Republicans, we asked Julianna Goldman to tell us how likely it is that the Republican House or Senate could change hands.

PAUL RYAN: How about it, huh?

JULIANNA GOLDMAN: By holding the emergency call with his members today, House Speaker Paul Ryan all but acknowledged that the tape showing Donald Trump bragging about sexual assault is now threatening Republican majorities in congress.

DONALD TRUMP: I moved on her like a [bleeped]. 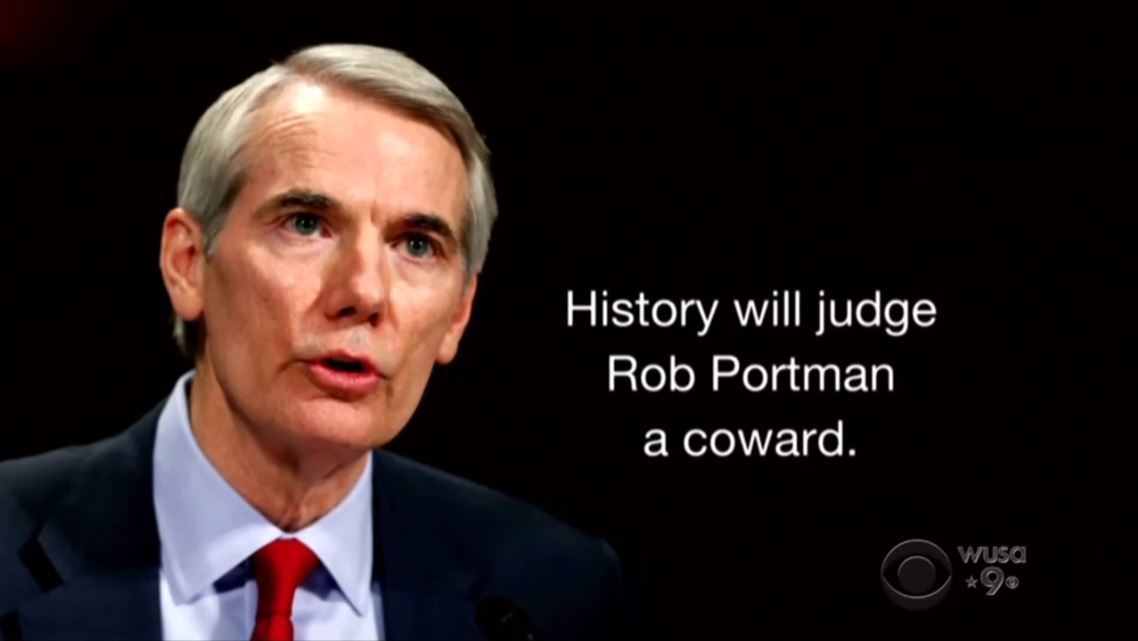 GOLDMAN: Democrats need 30 seats to take control of the House and just five seats to win back the Senate. Since Friday more than 70 Republicans, including Ryan, have denounced Trump, but the Speaker isn't one of the at least 27 who rescinded their endorsement. It's a rhetorical tightrope to avoid alienating Trump's core supporters, who polls show are voting for down-ballot Republicans and maybe even more galvanized after Trumps flame throwing after last night's debate.

TRUMP: Because you'd be in jail.

GOLDMAN: But Democrats smell blood and have already begun cutting ads for hitting opponents for waiting until now dump Trump.

OHIO CAMPAIGN AD: Where did you stand on Joe McCarthy? George Wallace? This is one of those moments.

GOLDMAN: Like this one out today from Ohio Democrat Ted Strickland who has fallen far behind Republican Senator Rob Portman.

OHIO CAMPAIGN AD: History will judge Rob Portman a coward. What will we do?

GOLDMAN: Today senate majority leader Mitch McConnell said he won't weigh in on the election. Scott, one group that is sticking by Trump is the Republican National Committee, which also said today that it will still provide money and other resources to the Republican nominee.