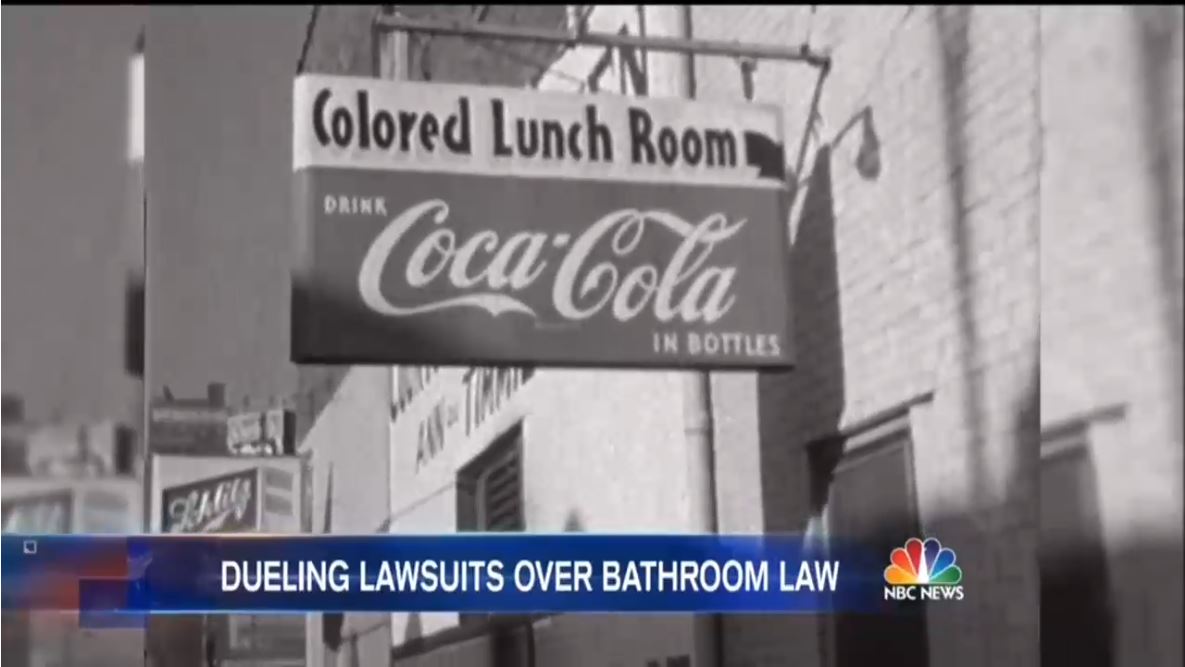 On Monday, all of the network evening newscasts could not wait to join in on US Attorney General Loretta Lynch’s beat down of North Carolina. Only the tornado outbreak in Oklahoma could keep them from jumping in immediately. “In her view, this is the new Jim Crow,” reporter Steve Osunsami said on ABC's World News Tonight of Lynch’s reasoning for taking the state to court.

On NBC Nightly News, Pete Williams echoed Osunsami conjuring the specter of southern segregation of public spaces like fountains and bathrooms. “It wasn't so long ago, she said, that restroom signs in the state kept some people out for no good reason,” Williams said leading into a clip of Lynch proclaiming that America should “write a different story this time.” The comparison to Jim Crow was juxtaposed with Osunsami reporting that Governor Pat McCrory was standing in defiance of Lynch, “Two hours earlier, North Carolina's governor stood before cameras refusing to back down.”

NBC overly simplified McCrory’s position and reason he chose to sue the federal government and defend the law. Williams made it seem as though the state was trying to exploit a loop hole in order to discriminate against transgendered people, “Civil rights law, he says, does not outlaw discrimination based on someone's transgender status.”

All three of the networks were absolutely giddy to report how the state’s economy has suffered since the law was enacted. “By one estimate, HB2 could cost the state more than $4.8 billion in federal funding,” CBS’ Omar Villafranca stated. And Williams reported that, “The state's economy is already paying a price for standing by the law, losing an estimated $200 million in income from canceled events.” ABC also reported that the NCAA has plans to move competitions out of the state.

DAVID MUIR: Next tonight, to a legal showdown this evening between the federal government now and the state of North Carolina over that state's controversial new transgender bathroom law. It sparked dueling protests. The federal government late today moving forward and suing the state because they say authorities are now violating civil rights there. Earlier, the state had already sued the Obama administration for what they call, a quote, radical reinterpretation of the law. ABC's Steve Osunsami is in Raleigh, North Carolina, tonight. 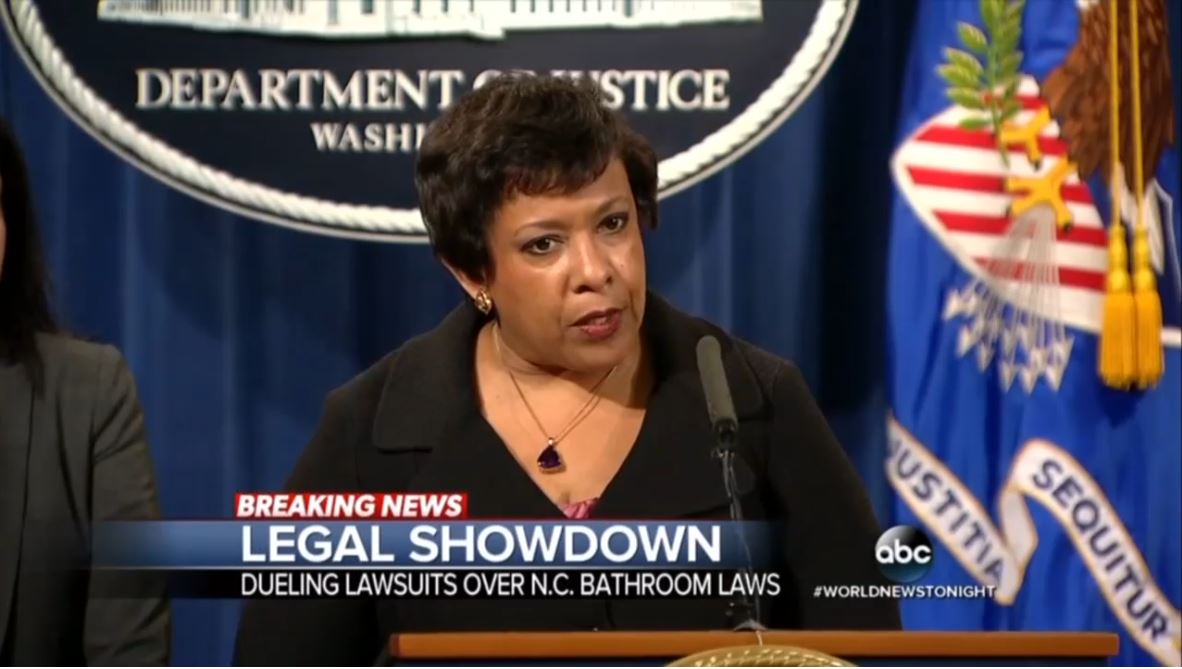 STEVE OSUNSAMI: Tonight, the fight in the streets over public accommodations is moving to the courthouse. In her lawsuit, the country's top prosecutor is now asking a federal court to stop North Carolina from enforcing its new law. Charging that it removes protections for gay families, and keeps transgender residents out of the public restrooms they need. In her view, this is the new Jim Crow, sex discrimination in violation of federal civil rights law.

PAT MCCRORY: I think it's time for the U.S. Congress to bring clarity to our national anti-discrimination provisions.

OSUNSAMI: In his new lawsuit, he argues that transgender Americans are, quote, not a protected class under current law. Meanwhile, businesses are leaving the state in protest, and the NCAA is threatening to move its games out of state. On the side, activists are taking their protest to stores –

UNIDENTIFIED: I believe you are violating the law.

OSUNSAMI: --that are accommodating transgender customers.

The federal government could still play another card and refusing to give federal dollars to University of North Carolina and state police, David.

SCOTT PELLEY: Now to a legal firestorm. The U.S. Justice department and the state of North Carolina sued each other today. At issue: The new state law that the federal government says violates the rights of transgender Americans. Omar Villafranca is in Raleigh.

LORETTA LYNCH: They created state-sponsored discrimination against transgender individuals who simply seek to engage in the most private of functions in a place of safety and security. A right taken for granted by most of us. 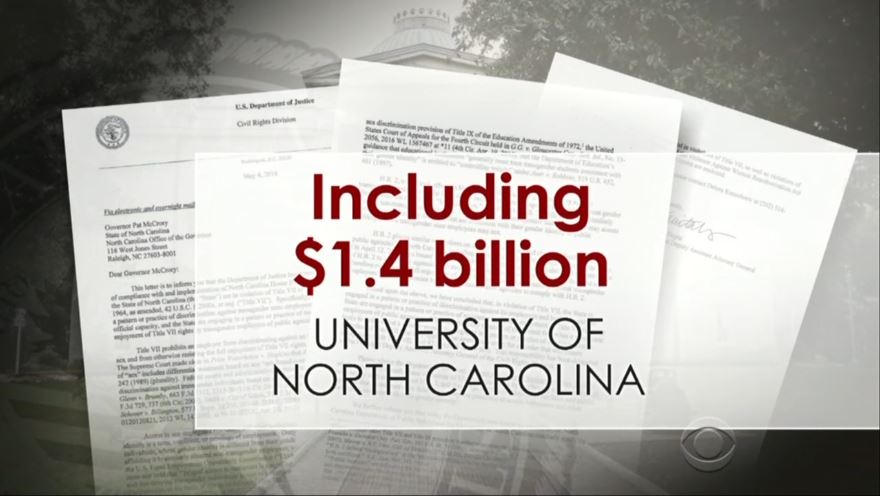 PAT MCCRORY: We believe a court rather than a federal agency should tell our state, our nation and employers across the country what the law requires.

VILLAFRANCA:The D.O.J. sent a letter to North Carolina officials last week and warned them that if the state didn't comply, the government could withhold billions of federal dollars earmarked for the tar heel state. That included $1.4 billion going to the U.N.C. School system. HB2, known as the bathroom bill, said transgender people have to use restrooms based on the gender on their birth certificate. The debate sparked heated protests, but the measure sailed through the legislature and was signed into law. Dozens of corporations condemned the law. Last month a long list of performers, including Bruce Springsteen and pearl jam, canceled their shows in protest of HB2. Madeline Goss was born man.

MADELINE GOSS: We are not boogiemen. Transwomen are women. Transmen are men. We're just here trying the live our lives. We want everyone to see that.

VILLAFRANCA: By one estimate, HB2 could cost the state more than $4.8 billion in federal funding. Scott, we're just now waiting on the ruling from a North Carolina federal court.

LESTER HOLT: Tonight, a blockbuster clash is brewing over transgender rights, and North Carolina's so-called bathroom law. The state's governor is going to the mat taking on the U.S. Government and suing the Obama administration. The feds shot right back with a lawsuit of their own, and strong words from the attorney general. It could lead to a landmark decision. Our justice correspondent Pete Williams has details.

PETE WILLIAMS: Both sides turned up the heat today in the battle over transgender rights, beginning with Governor Pat McCrory who sued the federal government to defend his state's new law that forbids people to use the bathroom of gender identity instead of the sex on their birth certificates.

PAT MCCRORY: We believe a court rather than a federal agency should tell our state, our nation, and employers across the country what the law requires.

WILLIAMS: His lawsuit says the federal government's effort to stop enforcement of the law is a blatant overreach. Civil rights law, he says, does not outlaw discrimination based on someone's transgender status.

Governor McCrory said he was acting in part to prevent the federal government from cutting off $4.3 billion in federal funds for the state's public schools and universities. Today the U.S. Attorney general fired back, announcing a federal lawsuit against North Carolina, her home state. It wasn't so long ago, she said, that restroom signs in the state kept some people out for no good reason.

LORETTA LYNCH: Let us write a different story this time. Let us not act out of fear and misunderstanding, but out of the values of inclusion, and diversity and regard for all that makes our country great.

WILLIAMS: And she had this message for transgendered people.

LYNCH: We see you. We stand with you. And we will do everything we can to protect you going forward.

WILLIAMS: The state's economy is already paying a price for standing by the law, losing an estimated $200 million in income from canceled events. And some small businesses like this Raleigh gift shop say it's hurting them, too.

WILLIAMS: Officials here say they want to see how the University of North Carolina itself responds before any decisions about cutting off school funding, and for now the law remains in effect, though the justice department is asking a judge to block it. Lester?