On Monday on Twitter, National Review writer Charles C. W. Cooke called out the hypocrisy of the New York Times, as he posted a contrast, a Times flip-flop: a 2014 Editorial Board write-up on how the “Terror Watch Lists Run Amok” and a 2015 Editorial Board write-up on why Republicans are showing “Tough Talk and a Cowardly Vote on Terrorism” by refusing to let the terror watch lists run amok.

Back in 2014, the Editorial Board detailed the story of Dr. Rahinah Ibrahim, who was placed on the terror watch list after being successfully removed when she on a student visa, and then placed back on the list. The following is the last couple of paragraphs by the Board on the issue of the Terror Watch Lists back then. 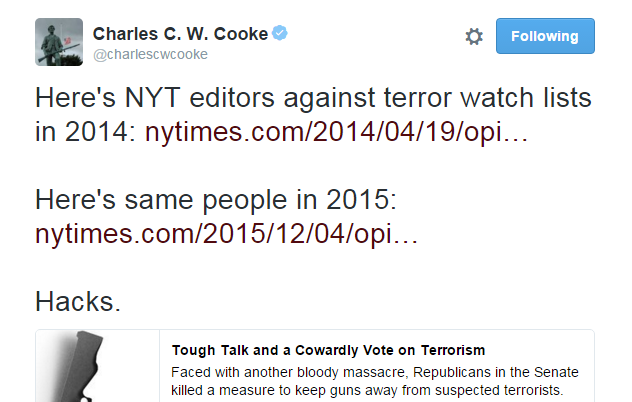 How can Dr. Ibrahim be a terrorist and not be a threat at the same time? Welcome to the shadowy, self-contradictory world of American terror watch lists, which operate under a veil of secrecy so thick that it is virtually impossible to pierce it when mistakes are made. A 2007 audit found that more than half of the 71,000 names then on the no-fly list were wrongly included.

In a recently un-redacted portion of his January ruling, Judge Alsup noted that in 2009 the government added Dr. Ibrahim back to its central terrorist-screening database under a “secret exception” to its own standard of proof. This would be laughable if it weren’t such a violation of basic rights. A democratic society premised on due process and open courts cannot tolerate such behavior.

But on Friday, the Editorial Board decided to evolve like the San Bernardino “evolving situation” has. The reason for the article was the decision by the Senate to kill the recent attempt to place a measure into law that denied citizens’ rights.

While the nation suffered through the shock of another bloody massacre,on Thursday every Senate Republican except Mark Kirk of Illinois voted against legislation to prevent people on the F.B.I.’s consolidated terrorist watch list from purchasing guns or explosives. 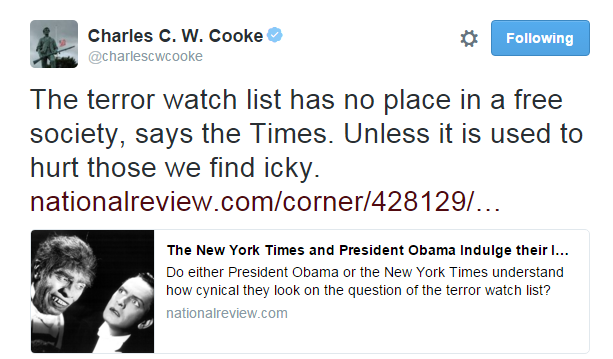 The measure has been introduced repeatedly since 2007. The Government Accountability Office has documented that over years of congressional blockage, hundreds of suspected terrorists on the watch list bought guns.

But the assault on Republicans, and the turning from their former values continued. Attacking the Congressional Republicans, the Board wrote that they gave a “weak defense of arming potential terrorism suspects.” They would quote Speaker of the House, Paul Ryan, who echoed the very arguments the Editorial Board gave in 2014. “I think it’s very important to remember people have due process rights in this country, and we can’t have some government official just arbitrarily put them on a list.” And in typical fashion, the Times criticized Ryan and Congressional Republicans for worrying more about “someone might be turned away from a gun shop than shielding the public against violent criminals.”

Based on the Fifth Amendment, “nor shall be compelled in any criminal case to be a witness against himself, nor be deprived of life, liberty, or property, without due process of law,” Republicans have held consistent to the Constitution. But that wouldn’t hold back from the parting shot by the Editorial Board on December 4.

“Since the Paris attacks, Republicans have been trying to outdo each other in describing how they’d crack down on global terrorism. But when a mass shooting at home calls attention to laws that put guns into the hands of suspected terrorists, they ask for a moment of silence, while taking action that speaks volumes.”