ABC's Sawyer to Obama: Is the U.S. 'More Racist or More Sexist?' 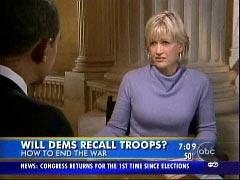 For the third time in as many weeks, ABC continued to showcase Democratic Senator Barack Obama. Anchor Diane Sawyer interviewed the first-term senator from Illinois on Monday's Good Morning America, and asked him about a range of topics, from the war in Iraq and a potential Obama run for the White House in 2008, to the groundbreaking of the Martin Luther King, Jr. memorial on the National Mall. The most eyebrow-raising moment of the interview, however, occurred when Sawyer asked Obama about Sunday’s Washington Post article which questioned whether racism and sexism plays a role in the decision-making of American voters:

Diane Sawyer: "We have seen new polls this morning about you and Senator Hillary Clinton. Here's my question. Do you think that residual resistance is greater for race or for gender? Is the nation secretly, I guess, more racist or more sexist?"

Sawyer began her interview with Obama, whom has been described in glowing terms by ABC in recent weeks as the new ‘it’ candidate for the Democratic Party and a ‘political phenomenon’, by asking about Iraq, and his previous call for troop reductions:

Sawyer: "Let's start with Iraq, because a number of your Democratic colleagues have said now that they think six to eight months is the time to begin troop withdrawal, phased troop withdrawal. You once said it should begin by the end of this year."

Obama: "Well, look, the--I said it should begin at the end of this year at a time when we weren't certain what was going to happen with the President and how he was going to respond with respect to the Secretary of Defense. I think now it's too late to try to start something before the end of the year. What I would do is sit down with the Joint Chiefs of Staff and the military that's actually on the ground and figure out, how do we fit together a military strategy that can start that phased redeployment, but ensure not total collapse in Iraq, and also make sure that we engage the Iraqi government."

To her credit, Sawyer then went on to ask Obama about the administration’s concerns about the effect setting a timetable for withdrawal would have on the insurgency:

Sawyer: "But let me ask you about something the Bush administration said during the campaign. They said the minute this is announced--"

Sawyer: "--that the insurgents and the terrorists in Iraq have just been emboldened. They know they only have to hold out now for another six to eight months."

Obama: "You know, if our only problem was the insurgency, that theory might have some credence. The problem, at this point, is really sectarian violence and the fact that the current Iraqi government doesn't seem to have the capacity or the will to disarm militias, to get serious about bringing together the sectarian parties and try to deal with this situation and to engage the regional powers, Iran, Syria, Saudi Arabia, to force them to the table. And so, the only way I think we can trigger that, at this point, is to make sure that they know we're serious about not being there permanently."

Sawyer then asked excitedly whether Obama was still considering running for higher office in 2008:

Sawyer: "As we know, now that the congressional elections are over, it is on to the presidential elections. And never has anybody said I'm thinking about something and created as much as a stir as you did when you said, I'm thinking about running for president. Want to ask--well, first of all, I have to ask you, any new thoughts this morning, in case I missed the lead here?"

Obama: "It's only been three or four days. We're--I need a little more time than that."

It was then that Sawyer moved on to question the Senator about the Washington Post article regarding voters racism and sexism:

Sawyer: "There was an article in the Washington Post over the weekend, which raised a provocative question, which said that people say, 90 percent of Americans say that race does not matter when they go to the polls. However, a lot of pollsters think that not everybody is telling the truth. What do you think?"

Obama: "You know, my sense is, whether it's a African-American candidate running, a woman candidate running, if it's non--a non-traditional candidate, there's an additional threshold that you have to meet. I think you have to show people competence in a way that, if you're a white male, you may not have to show initially. But once you do, I think people are willing to judge you on the merits, they're willing to judge you as an individual. The key is getting known and getting people comfortable. And at that point, then I think they're willing to, to, to look at the individual, as opposed to their, their sex or their, or their race."

Sawyer: "We have seen new polls this morning about you and Senator Hillary Clinton. Here's my question. Do you think that residual resistance is greater for race or for gender? Is the nation secretly, I guess, more racist or more sexist?"

Obama: "You know, I really think it comes down to, to the individual and the people end up having the sense that, will this person look out for the interests of all people? And if they're able to, to show that and demonstrate that, then I think, ultimately, it won't make a difference."