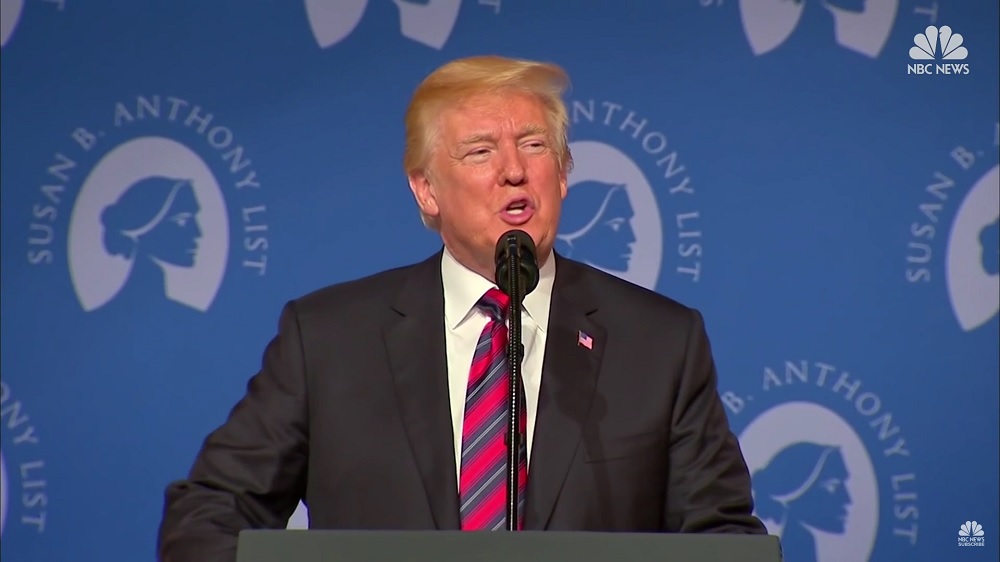 On Wednesday, Ricardo Alonso-Zaldivar and David Crary of the Associated Press hyped that the "the Trump administration is remaking government policy on reproductive health — moving to limit access to birth control and abortion and bolstering abstinence-only sex education."

The pair spotlighted how "social and religious conservatives praise the administration for promoting 'a culture of life,'" but failed to give an ideological label for the "women's-rights activists and some medical experts [who] view the multi-pronged changes as a dangerous ideological shift." The journalists also slanted towards the pro-abortion side by quoting six critics of the Trump policy shift, versus just three supporters.

Alonso-Zaldivar and David Crary led their report with the euphemistic "reproductive health" term regarding birth control and abortion, and continued with their omission regarding "women's-rights activists and some medical experts." The duo first quoted from President Trump's "recent speech to the Susan B. Anthony List, which backs political candidates who oppose abortion." The chief executive emphasized, "When I ran for office, I pledged to stand for life. And as president, that's exactly what I’ve done."

The AP correspondents outlined that "most of the changes involve rules and regulations under the administration's direct control, such as a proposal to forbid federally funded family planning clinics from referring women for abortions and separately allowing more employers who cite moral or religious reasons to opt out of no-cost birth control for women workers." They added that "Trump also is appointing numerous new federal judges endorsed by anti-abortion groups," and pointed out that "Justice Neil Gorsuch, the president's only appointment to the Supreme Court so far...has drawn praise from anti-abortion groups and criticism from abortion rights supporters."

Alonso-Zaldivar and Crary followed the excerpts from President Trump with four straight quotes from liberal activists. The pair quoted Democratic Rep. Diana DeGette, who decried how the White House is "proposing abstinence-only sex education —which study after study has shown doesn’t work— restrictions to family planning, and more and more restrictions to abortion."

They soon highlighted that "eight professional groups representing doctors, nurses, midwives and physician assistants say the administration’s Title X proposal 'dangerously intrudes' on the patient-provider relationship." The head of one of those groups — Dr. Hal Lawrence of the American College of Obstetricians and Gynecologists — underlined that "the strange thing about this is that people who want to decrease the number of abortions are taking away access to the very services that help prevent them."

The duo also quoted Karina Romero, who spoke "at a recent rally organized by women's health advocates in Phoenix." They summarized that Romero "recalled how she had no health insurance and about $20 in her bank account when she sought birth control at a Planned Parenthood clinic in the city’s suburbs." The activist sang the abortion group's praises: "They have allowed me to pursue a higher education without having to worry about how I'm going to pay for my birth control, or how I’m going to pay for just a regular check up every year."

The AP journalists also included an excerpt from "supporter of abortion rights" and former Obama Health and Human Services Secretary Kathleen Sebelius, who denounced the Trump administration's stance: "This is playing politics and putting people in a very precarious situation."

Alonso-Zaldivar and Crary finally quoted from their second pro-lifer 21 paragraphs after their excerpt from President Trump:

"President Trump is decidedly pro-life and it is his administration’s prerogative to use federal funding rules to incrementally build a culture of life," said New. "The administration is seeking to redirect tax dollars away from entities like Planned Parenthood that treat abortion as a method of family planning and toward entities that affirm life and provide more holistic health care services."

The pair quickly followed with a quote from Dr. Stephanie Ho of Planned Parenthood's local affiliate in Arkansas, who zeroed in on the combination of the Trump administration policies with state-level restrictions on abortion: "They're pushing their views on everyone,' she [Ho] said. "They're ignoring scientific evidence and expert medical opinion."

Near the end of their report, the Associated Press correspondents noted that "at a time when social mores on human reproduction continue changing across the world, some see the U.S. in a time warp." They emphasized this point by turning to Adam Sonfield of The Guttmacher Institute, "a research organization that supports abortion rights." Sonfield contended that "A lot of social conservative activists are still fighting the battles from the '60s...That's their ultimate goal — that some people will just give up and stop having sex."

At least the pair let a pro-lifer have the last word: "But Kristi Hamrick, spokeswoman for Students for Life of America, said one result of the policy changes 'may be that American women will find that life goes on without Planned Parenthood.'"