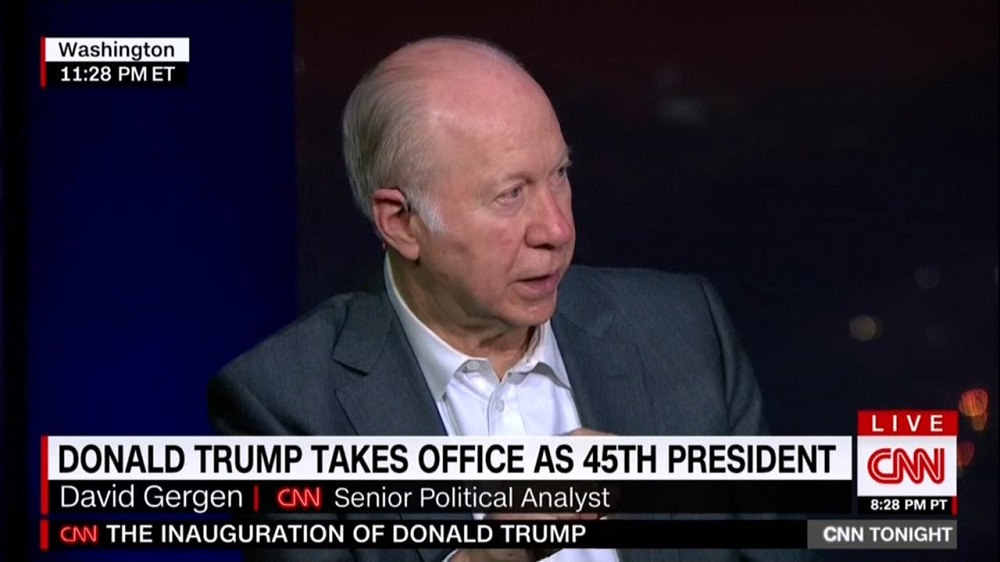 CNN's David Gergen and Martha Pease gushed over the anti-Donald Trump Women's March in a Sunday op-ed for the news network's website: "It was certainly a magic moment -- hundreds of thousands of women pouring hour after hour into the Mall in Washington." Gergen and Pease contended that "Trump may have done something that...even Barack Obama could not do: spark the creation of a progressive movement that massively resists an America that goes backward." The pair also touted how the protesters "fear that...they will lose control not only of their bodies but of their basic rights and destinies."

Gergen, CNN's senior political analyst, and Pease, a commentator for the liberal news channel, used their slanted "magical moment" term three times in their piece, starting with its very title: "Can women's march make magic moment into a movement?" They also led with the phrase, and quickly trumpeted that "all told, reported the Washington Post, millions marched to champion their rights and those of others, one of the biggest crowds in recent years."

After dropping their speculation that the President may have spurred the creation of a "progressive movement that massively resists an America that goes backward," the two pundits kept up their florid language about the march: "Without any doubt, this Women's March -- with all of its excitement, its inspiration, its glory -- has given millions of women and men fresh hope that their dreams of an inclusive, compassionate America can be protected and flourish. Now the really hard work begins."

Gergen and Pease soon took aim at President Trump himself for his minimal reaction to the march on Saturday:

On the day of the March, President Trump -- extraordinarily -- decided not to say anything at all....One might have thought they would invite in some of the protestors to the Roosevelt Room and have a quiet conversation about their fears with the President and daughter Ivanka, tapped to advise him on the education and empowerment of women and girls. As with the Inaugural Address, they missed another big opportunity for bridge building.

The two continued by pointing out the reality that abortion was a major issue for the march organizers and many participants: "They have a deep, chilling fear that Roe v Wade...will actually be overturned and they will lose control not only of their bodies but of their basic rights and destinies. This fear transcends gender; their anxiety is that over time the rights of all vulnerable citizens will be eroded."

Gergen and co-author Pease returned to fawning over the mass protest later in their piece: "The most touching scenes were of women in their 50s and 60s coming with their daughters, women pushing strollers, some women in wheel chairs, and men in those same pink hats. The march seemed an enormous catharsis, an astonishing and inspiring discovery that they have masses of allies."

The political commentators also likened their cause to that of the 19th century activists who pushed for the right for women to vote: "The question now is whether the protestors can turn the magic moment into a movement...There are certainly plenty of leaders, young and old alike...They know it will be hard...and that Trump and his allies on Capitol Hill hold the high ground. Fundamental change can take a generation or more, as the suffragists discovered more than a century and a half ago." They added by asserting that "the times today are different, though. Women feel more than ever their right to stand up to men who want to take them backwards."

Gergen and Pease concluded with another shot at President Trump and expressed their hope that the Women's March and its companion rallies do lead to organized resistance to the billionaire's agenda:

One marcher's sign said "Make America Compassionate Again", a goal that carries even more import in the face of Trump's dark vision of a country wallowing in self-centered isolationism. There's also the intense personal commitment that hundreds of thousands of women made to protect and support each other in the march -- and that many want to keep over the coming years. These are motivators that may prove to be game changers going forward.