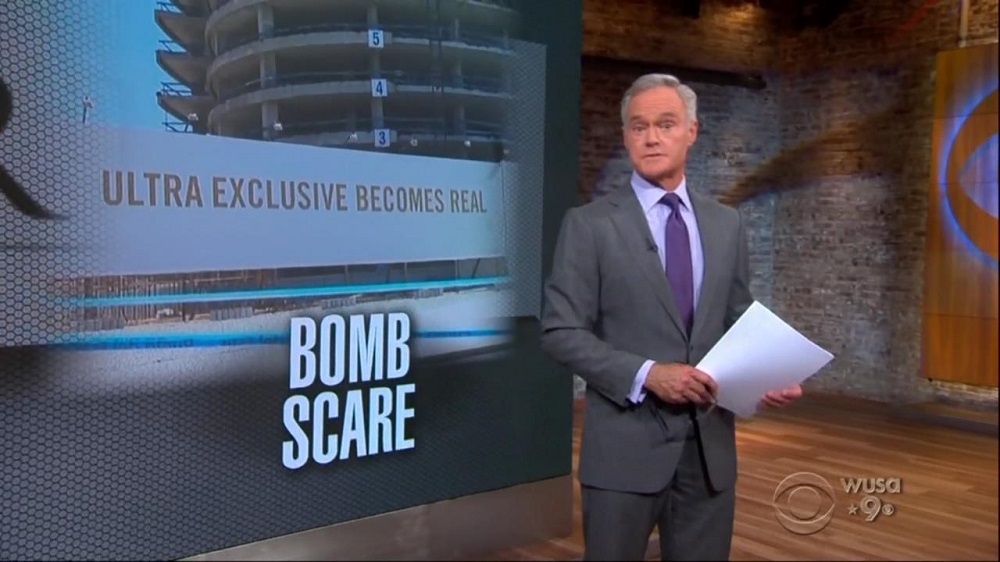 CBS Evening News was the sole Big Three evening newscast on Friday to cover the bomb theat on a Trump construction project in the South American country of Uruguay. Scott Pelley devoted ten seconds to the threat, which forced the evacuation of the planned high rise. ABC's World News Tonight and NBC Nightly News didn't cover the evacuation on their Friday broadcasts. However, both programs devoted news briefs to actor Kirk Douglas's 100th birthday.

Pelley's news brief followed a full report from correspondent Nancy Cordes on former New York City Mayor Rudy Giuliani removing himself from consideration for secretary of state in President-Elect Donald Trump's Cabinet. Cordes spent 42 seconds of the two minute and eight-second segment on another development with the Trump transition — how a questionnaire sent to the Department of Energy is "sparking some alarm." The 74-point document "asks for a list of all employees or contractors who have attend any meetings on carbon reduction."

The CBS journalist later underlined that "some civil servants fear the questions are designed to root out employees and programs focused on combating global warming." She also quoted an unnamed "Democratic senator [who] said it smacked of a witch hunt." However, she added that "Mr. Trump never made any secret of his desire to roll back some of the President's [Obama's] environmental agreements."

Pelley's news brief on the "bomb scare," as he put it, in Uruguay served as lead-in for a nearly two-minute-long report from correspondent Julianna Goldman on possible conflict of interests involving Trump and his companies' international projects. Goldman focused in particular on the billionaire's "business ties to the Philippines." However, she noted that these interests "aren't illegal, because there are no laws governing conflicts of interest for the President or Vice President."

ABC and NBC's evening newscasts also aired full reports on Giuliani removing himself from consideration for any Cabinet role. Unlike CBS, the networks didn't mention the Deparment of Energy story. Instead, both Big Three programs zeroed in on the controversy surrounding Trump's decision to remain an executive producer with his reality show, The Apprentice. ABC's World News Tonight also gave the latest developments regarding the aftermath of the President-Elect's role in the deal that helped save jobs at Carrier's facility in Indiana.

The full transcript of Nancy Cordes's report and Scott Pelley's news brief, which ran back to back on the December 9, 2016 edition of CBS Evening News:

SCOTT PELLEY: Well, Rudy Giuliani will not be secretary of state. Late today, the President-Elect put out a statement, saying Giuliani has declined any position in the administration.

Nancy Cordes is covering the transition.

NANCY CORDES (voice-over): In a late-afternoon statement, Mr. Trump revealed that 'Giuliani removed his name from consideration' in a meeting held on November 29 — the same day Mr. Trump dined with Mitt Romney — nearly two weeks ago. Giuliani told Fox News he withdrew, in part, because of the drama surrounding the top Cabinet spot.

RUDY GIULIANI, FORMER NEW YORK CITY MAYOR (via telephone, from interview on Fox News Channel): The whole thing was becoming, kind of, very confusing. And my desire to be in the Cabinet was great, but it wasn't that great.

CORDES: Trump aides insisted, as recently as today, that Giuliani was still in the running for secretary of state. Senior advisor Kellyanne Conway.

GIULIANI: My advice would be Mitt went just a little too far to — you can — you can make friends and make up; but I don't — I would not see him as a candidate for the Cabinet.

CORDES: The Trump transition team is sparking some alarm at another agency — sending officials at the Energy Department a probing, 74-point questionnaire that asks for a list of all employees or contractors who have attended any meetings on carbon reduction; and asks, which programs within D.O.E. are essential to meeting the goals of President Obama's climate action plan.

CORDES (on-camera): Some civil servants fear the questions are designed to root out employees and programs focused on combating global warming. One Democratic senator said it smacked of a witch hunt. But, Scott, Mr. Trump never made any secret of his desire to roll back some of the President's environmental agreements.

PELLEY: Nancy Cordes for us tonight — Nance, thanks very much.

Today, the Trump Organization was the target of a bomb scare. The construction site for a new Trump Tower in Uruguay was evacuated, but no explosives were found.