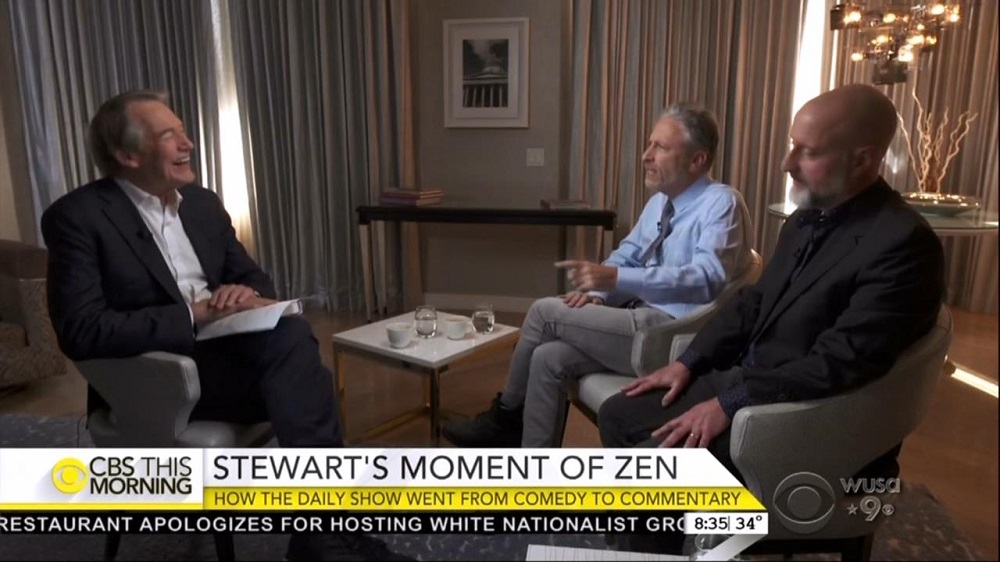 On Tuesday, CBS This Morning went gaga over liberal comedian Jon Stewart's and the 17 years of his Daily Show. Charlie Rose gushed that "it became, for all of us, a, kind of, cultural event — more than a show." He later added, "There was nothing quite like him. A lot of people did it very well....But Jon had a special place." Rose, along with Gayle King and Norah O'Donnell, later marveled over the show's "extraordinary collection" of comedians. The newscast also touted several clips of the Comedy Central program mocking Republicans. [video below]

Rose yucked it up with Stewart and Chris Smith, co-author of a new Daily Show book, during the segment, which was part of a larger interview set to be aired on the host's PBS show. The CBS morning show featured only one seven-second soundbite of the former Comedy Central star targeting President Obama. All of the other clips were of The Daily Show mocking/targeting Donald Trump, Bill O'Reilly, former President George W. Bush, and Senator John McCain.

Rose asked Smith, "So Chris, what did it become? It became, for all of us, a, kind of, cultural event — more than a show." The guest replied, "It's easy to forget in 2016 what the media world looked like in 1996, 1997, 1999 — where Comedy Central was — you know, still kind of a sketchy proposition." This set up Stewart to tout "one of the pivotal segments on the show that we were able to do through — you know, the 'Bush versus Bush' back in...2003," where the comedian juxtaposed a 2003 speech of the former president on the Iraq War versus the Republican's anti-nation building remark in 2000.

The CBS morning show later zeroed in on Steve Carell's improv-style, joking interview of McCain when he was campaigning for the Republican presidential nomination in 2000. Stewart underlined his aim was, "I got you. Here's my one moment; and I'm going to, with a scalpel, go at the crux of your identity as a politician, and expose it for everybody to see." Of course, The Daily Show host never took this approach President Obama. Instead, the President "summoned" the liberal comedian to the White House for "secret visits" over several years. Stewart also tossed softballs at the Democrat during his last appearance on the program.

Near the end of the segment, Rose wondered, "Do you think that you can find something that's equally right for you again; or you just simply hit a home run there — you found the perfect place for you?" Stewart answered, in part, that the show "gave me great satisfaction, and it gave me great confidence." However, he indicated that he took greater "joy" in his children. The three CBS This Morning anchors fawned over this answer, with Gayle King replying, "God, that's so beautifully said!...I just love him!" Rose added his "there was nothing quite like him" line. The journalists then gave examples of the "extraordinary collection" on The Daily Show, with O'Donnell naming Catholic-bashing Samantha Bee [video below].

The transcript of the relevant portions of the Jon Stewart segment from the November 22, 2016 edition of CBS This Morning:

CHARLIE ROSE (from pre-recorded interview): Over the sixteen years, how did the show evolve? What did it become that it was not at the beginning?

[CBS News Graphic: "Stewart's Moment Of Zen: How The Daily Show Went From Comedy To Commentary"]

JON STEWART: I mean, in truth, I think the evolution of the show — we just became better at — at doing it.

STEWART: What we tried to develop was a decent internal barometer of what worked for the show, and how well we could execute it.

STEWART (from year 2000 episode of Comedy Central's The Daily Show): It is Bush by 225 votes. So, as you can see, it's never going to end. (audience laughs)

STEWART (from 2008 episode of Comedy Central's The Daily Show): I'm going to on my Obama. Are you ready? Here we go. (audience cheers and laughs) "Yes, we can." (Stewart humorously laughs)

STEWART: So, you know, you could never look at a piece and go, like, I don't know if this is Emmy-worthy. (Rose laughs) And we're an Emmy Award-winning show—

STEWART: You had to try and keep your own morality and integrity as the beacon for where you wanted the material to go.

STEWART (from 2015 episode of Comedy Central's The Daily Show): I have one simple goal—

STEWART: I want you to admit that there is such a thing as white privilege. That's all I want I want to do—

O'REILLY: I know. I knew you were going to— (audience cheers and applauds)

ROSE: So Chris, what did it become? It became, for all of us, a, kind of, cultural event.

ROSE: More than a show?

STEWART (from 2003 episode of Comedy Central's The Daily Show): We're going to have an honest, open debate between the President of the United States; and the one man, we believe, has the insight and the cajones to stand up to him.

STEWART: One of the pivotal segments on the show that we were able to do through — you know, the 'Bush versus Bush' back in the—

STEWART (from 2003 episode of Comedy Central's The Daily Show): Mr. President, is the idea to just build a new country that we like better?

PRESIDENT GEORGE W. BUSH (from 2003 speech): We will tear down the apparatus of terror, and we help you to build a new Iraq that is prosperous and free.

BUSH (from 2000 presidential debate): I don't think our troops ought to be used for what's called nation building.

STEWART: People used to come up to me, in the news business: how do you guys find the clip of the guy contradicting himself (Rose laughs) — you know, from five years ago? And I go, we have a — we have a TiVo. We record it; and then, we go back and we — we search for it.

SMITH: What they found, early on, was a tone—

STEVE CARELL (from 1999 episode of Comedy Central's The Daily Show): It's every reporter's dream to spend a day—

SMITH: They found a tone in a piece Steve Carell did with John McCain in late 1999.

CARELL: The best way to get to a presidential candidate's bus is through his wife.

SMITH: Carell is a world-class improviser.

CARELL: Let's do a lightning round—

SMITH: The difficulty in this is you got world-class improvisers working with civilians who don't know they're in an improv.

CARELL: Senator, how do you reconcile the fact that you were one of the most vocal critics of pork-barrel politics; and yet, while you chairman of the Commerce Committee, that committee set a record for unauthorized appropriations.

SMITH: And McCain freezes. There's a deer in the headlights moment.

STEWART: And then, what do we have to do at that point? We let you go. It's catch and release.

STEWART: Because we have to undercut it with a laugh.

CARELL: I don't even know what that means!

STEWART: So, it's that idea of, I got you. Here's my one moment; and I'm going to, with a scalpel, go at the — the crux of your identity as a politician, and expose it for everybody to see.

ROSE: Do you think that you can find something that's equally right for you again; or you just simply hit a home run there — you found the perfect place for you, and it was 17 years of—

STEWART: Yes. It was a gift that was — that I was fortunate enough to be graced with for all that time, and to be in contact with all of those incredible people. But I — I don't expect to find that again.

STEWART (from 2015 episode of Comedy Central's The Daily Show): This is just — it's a conversation. This show isn't ending. We're merely taking a small pause in the conversation.

STEWART: There's a difference between satisfaction and joy. This gave me great satisfaction—

STEWART: And it gave me great confidence. But joy — joy — driving a couple of knucklehead kids home from school that I get to sit and listen—

KING: You — you really feel his — his absence, Charlie, during these times, don't you?

ROSE: Oh, yeah — indeed — yes. I mean, there was no — there was nothing quite like him. A lot of people did it very well—

ROSE: And we see them and we show their work here during the political year—

ROSE: But Jon had a special place.

ROSE: But what's also amazing about The Daily Show is they assembled such an extraordinary collection—

ROSE: Samantha Bee — especially Samantha Bee. You can see my full conversation with Jon Stewart tonight on my PBS program.