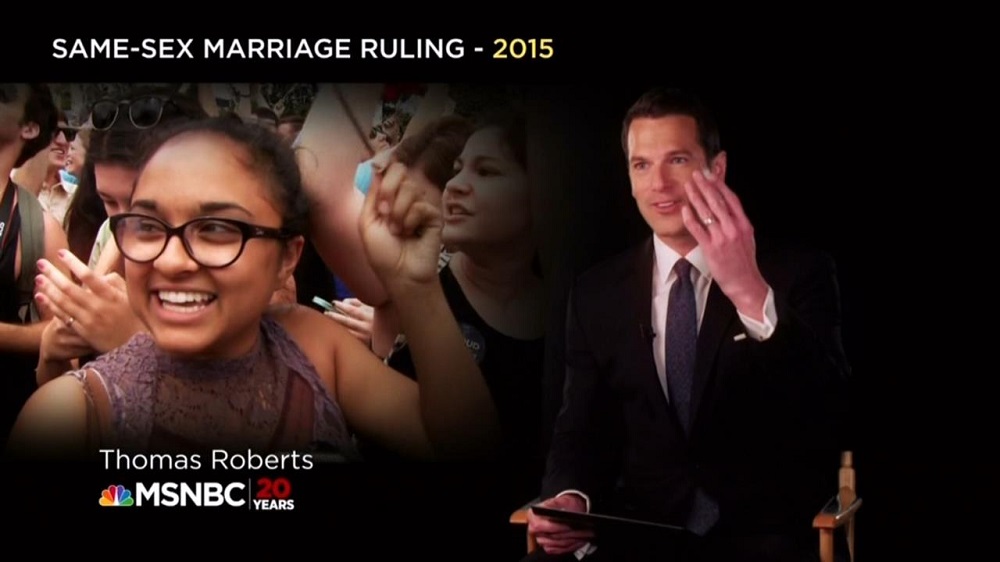 MSNBC's Thomas Roberts has repeatedly flaunted his liberal bias over the years, but he took it to a new level in a recent ad that not only marked his network's 20th anniversary, but also celebrated the Supreme Court's 2015 decision legalizing same-sex "marriage." Roberts held up his hand with a ring on it, and gushed, "It's a victory — I've got the ring to prove it. Recognizing this is a constitutional right to Americans whether you're gay or straight is pretty fantastic....I kind of like what the Supreme Court did." [video below]

The anchor's boast about his ring is actually misleading, because he actually got it back in September 2012 — over two years before the Court's ruling in the Obergefell v. Hodges case.

This isn't the first time that Roberts has participated in a MSNBC ad that boosted the social left's LGBT agenda. Back in June 2015, mere days after the high court's decision, Roberts, along with fellow MSNBC personalities Tamron Hall and Alex Witt, promoted "Pride Month" in an online video.

The transcript of the Thomas Roberts ad for his network's "MSNBC 20 Years" campaign:

PETE WILLIAMS (from 2015 live coverage on MSNBC): This is a — a total victory for the advocates of same-sex marriage. (clip of people cheering)

THOMAS ROBERTS: Yup! It's a victory — I've got the ring to prove it. Recognizing this is a constitutional right to Americans whether you're gay or straight is pretty fantastic. I'm a proud American; I like who I am; but I'm also a part of the LGBT community. And yeah, I'm married. And I'm married, and I — I kind of like what the Supreme Court did.