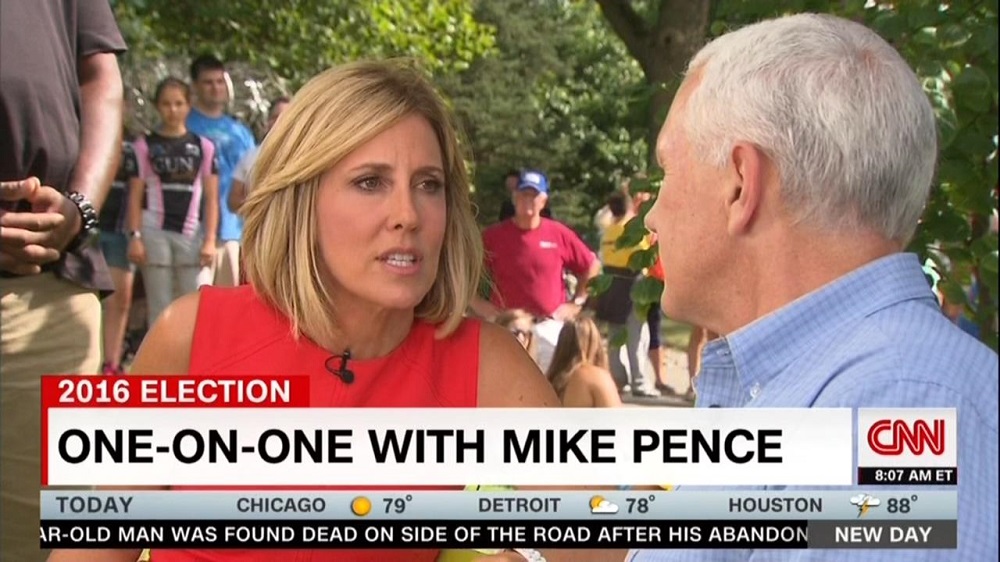 On Monday's New Day, CNN's Alisyn Camerota hounded Mike Pence over supposedly signaling he was "wrong" about supporting free trade his "entire professional and public life" due to his running with Donald Trump. Camerota wondered, "You supported TPP. You supported CAFTA. Donald Trump has said about those things that the U.S. is being taken to the cleaners by these trade deals. Which one of you is right?" She also pointed out, "You supported every single free trade deal in 12 years that you were in Congress," and asked, "Were you wrong during that time?" [video below]

Camerota also hyped how "Steve Bannon, now at the top of your campaign — he's known as a street fighter. He's known as a flame-thrower. He was the head of the far-right website, Breitbart." She underlined past Breitbart headlines: "'Big trans hate machine targets Curt Schilling' — that is in reference to the transgender community. 'There's no hiring bias against women in technology. They just suck at interviews.' 'Birth control makes women unattractive and crazy.' You get the picture. Are you comfortable with that kind of flame-throwing or incendiary messaging?"

The anchor pre-recorded her interview with the Indiana governor during his recent stop at the Iowa State Fair. She first brought up how Trump "was making an appeal to African-American voters...used some language and messaging that some people have taken umbrage with." After quoting from the billionaire's remarks, she twice asked his running mate about this "message" from Trump: "So, in terms of the language that he used on Friday night, you were okay with it — the 'you're living in poverty; you have no jobs; what the hell do you have to lose?' You were okay with it being that blunt of a message?"

Camerota transitioned to Bannon's new position with the Trump campaign by first asking Governor Pence for his take on the changes.  She also wondered, "What would you say was the problem with Paul Manafort's leadership?"  Once the guest gave a short answer, the journalist used the "flame-thrower" and "far-right" labels about Bannon and Breitbart. Pence replied, in part, that he's "comfortable with the team Donald Trump is building around him."

The CNN anchor twice used the "incendiary" term about the Breitbart headlines/"messaging" as she pressed her guest on the issue.  She ended the interview by hounding the Republican governor on free trade. Fill-in anchor John Berman reacted to this last portion of the segment as the morning newscast resumed live programming: "Sudden nuance in the trade position of committed free trader Mike Pence."

Earlier in August 2016, Camerota was much more deferential to liberal guest Karen Meredith, who bashed Trump over the Khizr Khan controversy. The TV personality failed to give Meredith an ideological label during the segment, and gave her the kid-glove treatment.

CAMEROTA (from pre-recorded interview): Well, let's start with some of the latest headlines. On Friday night, Donald Trump was in Michigan, as you know, and he was making an appeal to African-American voters—

CAMEROTA: And he used some language and messaging that some people have taken umbrage with. I'll read some of it to you. He said, 'You're living in poverty. Your schools are no good. You have no jobs. You have 58 percent youth unemployment. What the hell do you have to lose?' That was an appeal to vote for the Pence — Trump/Pence ticket. What do you think of that message?

PENCE: Well, it was such an honor for me; and really, a privilege to be with Donald Trump earlier in the day as we toured neighborhoods devastated by the flooding in Baton Rouge. I saw — I saw this broad-shouldered leader and his profound compassion for the hurting families in Louisiana. And I think that message and other messages all proceed from the fact that Donald Trump and I both believe we can do better for every American. We can get this economy moving again.

CAMEROTA: But specifically, for the inner city, are there things that you can say to black voters right now that are living there that — how they would get jobs that currently aren't available to them?

PENCE: Well, I think it's — I think by — by promoting something different than what Hillary Clinton is advocating — which is more taxes, more regulation, more ObamaCare. Well, we're going to — we're going to lift the fortunes of job creators all across America. I mean, the reality is that the majority of jobs that are always created in this country are created by small business owners. But Hillary Clinton's plan to raise taxes, and Hillary Clinton's plan to increase regulations is going to continue to stifle growth in this economy, like we've seen for the last seven-and-a-half years.

PENCE: Well, look, Donald Trump is not an experienced politician who carefully selects his words. He speaks right from his heart, right from his mind. And what you heard this week is — is a leader who is determined to make America great for everyone in this country. And I think you're going to continue to see this campaign in the days and weeks ahead speak directly to Americans in every community about what — what our plan to make America great again is going to mean for them and their families.

[CNN Graphic: "Pence: Trump Speaks 'Right From The Heart'; Pence: Campaign Will Speak Directly To Americans In Every Community"]

CAMEROTA: Let's talk about some of the changes that have been happening in the campaign. Paul Manafort out, Steve Bannon now the CEO; Kellyanne Conway now the campaign manager. What do you think of those changes?

PENCE: I think — I think there are always — there's always a time, as you approach Labor Day, where campaigns — you know, evolve and change and have additions. And I expect that to continue to be evidence of a — of a campaign that — that's on a roll.

CAMEROTA: What would you say was the problem with Paul Manafort's leadership?

PENCE: I think — I think Paul Manafort made a decision to step down just so that there wouldn't be any distractions in the campaign.

CAMEROTA: Steve Bannon, now at the top of your campaign — he's known as a street fighter. He's known as a flame-thrower. He was the head of the far-right website, Breitbart. Are you comfortable with his messaging?

PENCE: I'm comfortable with the team Donald Trump is building around him. Steve Bannon, Kellyanne Conway — who's making history, by the way, as the first woman in the history of the Republican Party to lead a major national campaign, and someone who I've known for years.

I think, you know, the key to Donald Trump's success in business, I think, is also going to continue to be a key for his extraordinary success in his campaign — and that is bringing the right men and women around him, putting the right combination together. That's exactly what a great CEO does, and that's what Donald Trump is doing in this campaign.

CAMEROTA: In terms of Steve Bannon — I mean, he is controversial. Let me just read to you some of the headlines in Breitbart lately: 'Big trans hate machine targets Curt Schilling' — that is in reference to the transgender community. 'There's no hiring bias against women in technology. They just suck at interviews.' 'Birth control makes women unattractive and crazy.' You get the picture. Are you comfortable with that kind of flame-throwing or incendiary messaging?

PENCE: I think the — Donald Trump is bringing around him a team of people, and Steve and Kellyanne and all those that have been a part of this team for a long period of time that I think is delivering a message that is resonating with millions of Americans. You know—

CAMEROTA: Even if it's incendiary—

CAMEROTA: Trade means security. You supported TPP. You supported CAFTA. Donald Trump has said about those things that the U.S. is being taken to the cleaners by these trade deals. Which one of you is right?

PENCE: Well, Donald Trump is right. And Donald Trump and I both support free trade. But the time has come — whether it be with — with NAFTA or all of these multinational agreements, like the TPP, that America take a step back, and ask whether or not these trade deals are working for the American worker.

CAMEROTA: But you supported these deals. You supported every single free trade deal in 12 years that you were in Congress. Were you wrong during that time?

PENCE: No. When — when NAFTA was signed by President Bill Clinton, there was a provision in that legislation that it was to be reviewed on a regular basis to make sure that it was working for the American worker. We've actually never done that. All Donald Trump—

CAMEROTA: Do you think it is not working?

PENCE: All — well, I think — I think we need to ask that question. I think the time has come for us to reopen NAFTA and renegotiate it with a — with a President who's proven himself to be one of the most skilled business leaders and negotiators in the world.

CAMEROTA: So, you regret some of your support for some of the free trade agreements that you were part of?

PENCE: No. Alisyn, honestly, you can be for free trade, and also be for the American worker and for American jobs.