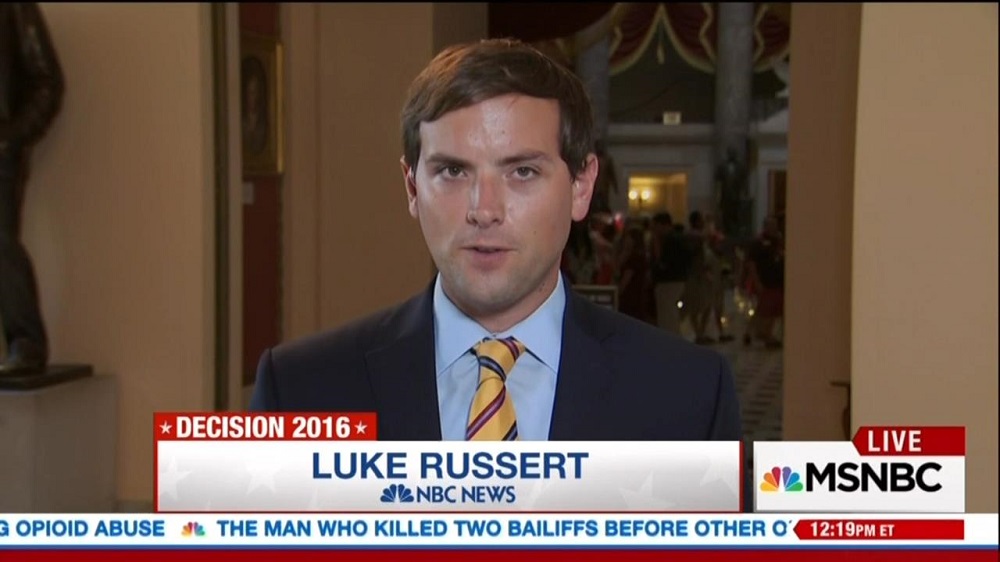 TVNewser's Chris Ariens reported on Wednesday that Luke Russert will be leaving NBC News, as of Friday. Ariens pointed out that Russert "just before the 2008 political conventions....and only a few weeks after the death of his father, Tim Russert, who was NBC News Washington bureau chief." He quoted from a statement by current Washington bureau chief Ken Strickland, who labeled the journalist "our dogged Capitol Hill correspondent: challenging members of Congress, cultivating sources, explaining procedures and providing valuable analysis."

However, the outgoing congressional correspondent made it clear from the very start of his career at the Big Three network that he had a liberal slant. Most recently, Russert gushed over the pro-gun control sit-in by congressional Democrats inside the House chamber in June 2016. He asked Rep. John Lewis, "Put this in history for me....Where does this stack up for you, in terms of what you've been able to accomplish in this life?" (Strickland praised Russert's "extraordinary and tireless coverage" of the sit-in near the end of his statement announcing the departure.)

The Media Research Center has compiled the worst examples of Russert's slanted journalism from his nearly eight-year career at NBC [with video of some examples below]:

MATT LAUER: "You actually ran into former President Bill Clinton. What was the encounter like? What did he say to you?" 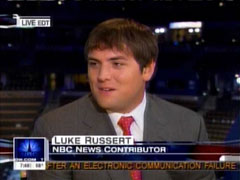 LUKE RUSSERT: "I did. I was in the hallway — managed to avoid the Secret Service. I got underneath the Secret Service hand line there, and I talked to him. And he goes, 'How did my girl do? How did my girl do?' And I said, 'Well, judging from the crowd, pretty damn good.' And he says to me, 'She knocked it out of the park — home run; home run. I'm so proud of her.' So, you could obviously see a very jubilant ex-president walking the halls here in Denver."
— Russert on the August 27, 2008 edition of NBC's Today, reacting to Hillary Clinton's speech at the Democratic National Convention in Denver.

"You have to remember, the smartest kids in the state go there, so it's leaning a little bit towards Obama."
— Russert on Today, September 24, 2008, commenting on the support for then-candidate Obama at the University of Virginia. He later apologized for the "dumb comment."

"Remember, this is the deepest fear that was in the back of everybody's mind going through the health care debate. A lot of members were threatened. Congresswoman Giffords' windows at her district office were broken. That same thing happened to Congresswoman Slaughter, a Democrat from New York. Congressman Clyburn had a noose — an African-American — faxed to him. In the back of everyone's mind, there is this fear that this type of attack could happen."
— Russert reporting on the mass shooting in Tuscon, Arizona on MSNBC News Live, January 8, 2011. The perpetrator turned out to be an anti-Christian atheist.

"Interesting article in the AP yesterday talking about Mitt Romney and secrecy....And it's funny. Yesterday, I was reporting that Mitt Romney was going to meet with Speaker [John] Boehner, having a rally this Sunday. Capitol Hill reporters knew before Romney campaign reporters. Is this one of the most secretive presidential campaigns in history?"
— Russert on MSNBC's The Daily Rundown, June 1, 2012.

"I would like to ask you specifically...what do you fear the most about a couple being together — a same-sex couple being together for over 60 years, like we saw in the Windsor case. What do you fear so much about them getting the same federal benefits for their marriage as a opposite-sex couple would?...why are you opposed?"
— Russert to Family Research Council President Tony Perkins, MSNBC's Andrea Mitchell Reports, March 27, 2013.

A Republican Calls Out Russert For His Slant

LUKE RUSSERT: "New York Times had an editorial today, and they said the following — quote, 'The Obama administration's fumbling is apparently a good excuse for them to do nothing' — them being the GOP — 'on immigration reform, on a budget agreement and on any other initiative coming out of the White House.' Do you worry, as someone who follows House GOP politics quite closely, that because you guys don't really have any substantial legislation moving forward for the rest of this year, that all these gains you could make are going to go by the wayside come January 15th, and you could go back down the Ted Cruz, Mike Lee rabbit hole that was so bad for your party last month?
REP. JASON CHAFFETZ: Well, that was a loaded question there, Luke! But no, come on, we can walk and chew gum, too.
— Exchange on MSNBC's Andrea Mitchell Reports, November 19, 2013.

GOP Ruins Christmas For The Poor

"Is this a tough issue for Republicans? Obviously, income inequality is at the forefront of a lot of folks minds these days. And do they risk looking like Grinches over the holiday season?"
— Russert to Republican pollster Kristen Soltis Anderson on a proposed federal minimum wage increase, MSNBC's The Daily Rundown, December 5, 2013.

"I now look at one of those supersize Cokes and a bag of chips like I would cigarettes, so that mindset needs to be all around America."
— Russert on MSNBC's The Cycle, June 2, 2014.

"I don't think it's far-fetched to say...that Joni Ernst is, without a doubt, the star of this Republican Senate class that was elected tonight – not only because of her impressive personal story, which basically won her this election – which is being a veteran; being a woman; and being 44 years old; and also, being able to have these rather extreme Tea Party views; and then, moderate them closer to the election."
—Russert during MSNBC's live election night coverage, November 5, 2014.

"Boehner wins Speakership for 3rd term in light of 25 #GOP defections. Never in doubt but the Kamikaze Caucus is alive & barking"
-Russert in a January 6, 2015 post on Twitter

Fawning Over Democrats in Congress

"Congressman Lewis, you are a civil rights icon. Your stories are remarkable — beaten within one inch of your life, it has been said....You've had a distinguished congressional career....Many of your colleagues, who share your experience, have never seen anything like this — the floor — the House of Representatives — taken over by a party, literally using tactics that you developed during the civil rights movement. How extraordinary is it that this is what it has taken for you to have to do — to literally sit on the floor of the House before you get a vote?... Where does this stack up for you, in terms of what you've been able to accomplish in this life?"
— Russert touting Democrats' pro-gun control sit-in inside the chamber of the House of Representatives, MSNBC Live, June 22, 2016.