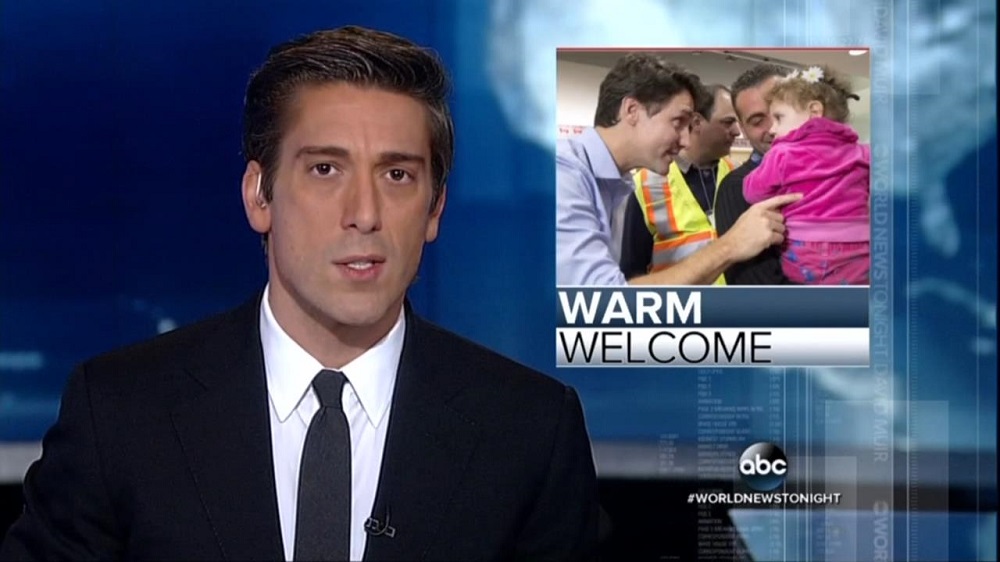 Both ABC's World News Tonight and CBS Evening News included graphics that used the exact same term during the news briefs on Trudeau: "warm welcome." [see screen cap above] Immediately before his 17-second brief, Muir actually spent 22 seconds noting that ISIS was threatening another ancient city in the Middle East:

DAVID MUIR: And from overseas this evening, ISIS is mounting a new threat against an ancient city — this time in Libya. Fighters storming into the coastal city of Sabratha, threatening to level stunning landmarks there built by Romans in the Third Century — militants already destroying ruins and artifacts in Syria's famed city of Palmyra — including two temples that stood for 2,000 years.

Though he was the sole Big Three network anchor on Friday evening to report on the storming of the Roman ruins, the ABC journalist failed to label ISIS "Islamist" or terrorist" during his news brief.

Muir then reported on Trudeau's visit to Toronto's airport:

DAVID MUIR: And from Canada tonight, the new prime minister personally welcoming Syrian refugees — 163 refugees arriving in Toronto, the first of 25,000 expected to be taken in by March. New Prime Minister Justin Trudeau greeting fathers, mothers, and children — telling them — quote, 'You're home.'

On CBS Evening News, Pelley gave his 22-second news brief after highlighting the return of two astronauts and a cosmonaut from the International Space Station. However, the anchor one-upped his competitor at ABC by giving a related news brief about new political graffiti on the Syrian refugee issue in France: 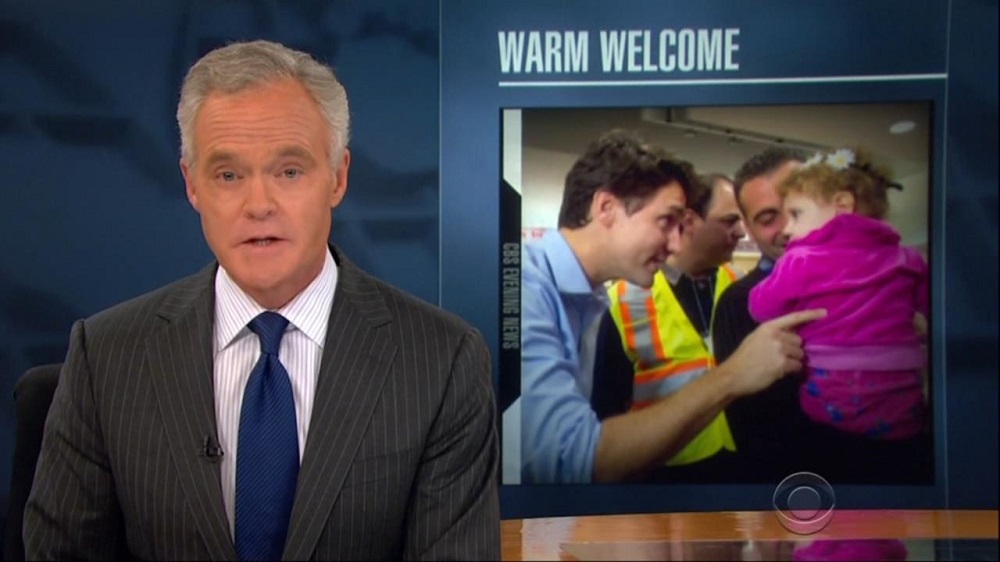 SCOTT PELLEY: In another noteworthy landing, 163 refugees escaping the war in Syria were welcomed to Canada by Prime Minister Justin Trudeau. He told them, 'You're home now.' Canada has pledged to take 25,000 Syrian refugees by March. Despite opposition, the U.S. plans to accept 10,000 next year.

In a refugee camp in France, a striking work of art turned up today on a concrete wall. The world-famous graffiti artist Banksy put up an image of Apple founder Steve Jobs, carrying a duffel bag and a computer. The artist pointed out that the man who created the world's most profitable company was the son of a Syrian immigrant.

Pelley also failed to include significant details about Jobs's biological father: Abdul Fattah Jandali was, indeed, Syrian, but had actually traveled first as a young man to Lebanon, where he studied at the American University of Beirut. After protests in Lebanon, he fled to New York, and eventually met Jobs's biological mother. Neither parent actually raised the now-deceased Apple founder. In fact, Jandali left Jobs's mother before he was born.

Friday's NBC Nightly News didn't cover Prime Minister Trudeau greeting the Syrian refugees. The program did air a report on Syria and ISIS, though. Correspondent Richard Engel detailed how the terrorist group might be trying to obtain fake and/or doctored American passports.