Here's a little parlor exercise readers can conduct with their friends who think that high-tech CEOs are the innovative saints of the universe.

The game would be to take the first three paragraphs of Michael Liedtke's Associated Press report on the collusion settlement to which that industry's major players just acquiesced, and revise it to reflect a different industry far less favored by the press. Then accurately point out the following: "There is no way this industry would gotten as much sympathy from the press as the AP gave these high-tech titans." After the jump, readers will see how I revised the AP's original first three paragraphs as if the settlement occurred in the oil industry, followed by what the AP's Liedtke actually wrote Thursday afternoon:

Oracle's Larry Ellison: Apple Is Going Down Without Steve Jobs

Appearing on CBS This Morning, Ellison said, "He's irreplaceable...They will not nearly be so successful because he's gone."

The Huffington Post has gotten a copy of the soon to be released biography of Apple co-founder Steve Jobs, and there are some snippets that are destined to anger Obama-loving media members across the fruited plain.

According to author Walter Isaacson, Jobs told the President in the fall of 2010, "You're headed for a one-term presidency":

The death of one of the great innovators of our time, or any time -- Steve Jobs -- brings a question asked by Pete Seeger in another context. To paraphrase: Where have all the (creative) people gone; long time passing. Jobs and fellow computer innovator Bill Gates represent if not a vanishing breed, then at least one that might be classified, were it an exotic animal, as endangered.

In a country that used to encourage, promote, honor and reward innovation, why does there now seem to be far fewer innovators? In our past, they propelled us to higher standards of living and made life more enjoyable and comfortable. If you missed them while studying sex education in school, try Googling "inventors and innovators" and see what pops up.

Does Bill Maher ever listen to the nonsense coming out of his mouth to make sure he doesn't contradict himself from one minute to the next?

On Friday's "Real Time," the host paid his respects to Steve Jobs by claiming how liberal the Apple founder was adding "He was not a corporate type" only to minutes later accurately note, "Apple makes their s--t in China. And they could still make it here and make a big profit, but they make more of a profit by making it in China" (video follows with transcript and commentary):

For the second day in a row, MSNBC's Martin Bashir used the death of one man to attack a completely unrelated conservative.

Having disgustingly besmirched Sarah Palin in the middle of his eulogy for Apple's Steve Jobs Thursday, Bashir on Friday went after Republican presidential candidate Herman Cain as he paid his respects to Reverend Fred Shuttlesworth (video follows with transcript and commentary):

It's becoming quite clear that there's no rock some members of the media won't crawl from under to trash Sarah Palin.

Case in point - MSNBC's Martin Bashir used his final segment Thursday to eulogize Apple's Steve Jobs as "the very best of American exceptionalism" while in the same breath attacked the former Alaska governor as "the very worst form of American opportunism" (video follows with transcript and commentary):

Satire: The iPad Versus the oPad

The folks at BulletPeople take a poignantly satirical look at Obamacare through the lens of the launch of the new Apple iPad. What would an oPad look like? 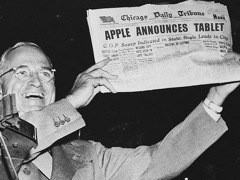 When Apple CEO Steve Jobs put the New York Times at the center of the ceremonious unveiling of his company's iPad tablet device, the implication was clear: this is the future of the news--or at least Jobs wants us to think it is. He stands to gain not only financially but politically as Apple becomes a major gatekeeper for information.

The news media industry itself is divided on whether e-readers like the iPad and the Amazon Kindle can revitalize the news business. Newspaper sales are, after all, at historial lows. Over 90 newspapers failed last year.

While there are scores of competing theories for why newspapers (and books to a lesser extent) are seemingly on the decline, a prominent and plausible one seems to be that they have lost control of their content. Aggregators like Google News have provided news consumers with faster, more reliable sources for news. The proliferation of the blogosphere has loosened Old Media's grip on that news.

Time Takes Anti-Businessman Approach in ‘Person of the Year’ Considerations

You may not like Apple CEO Steve Jobs for cheerleading for Al Gore, but there's no denying he's a successful businessman.