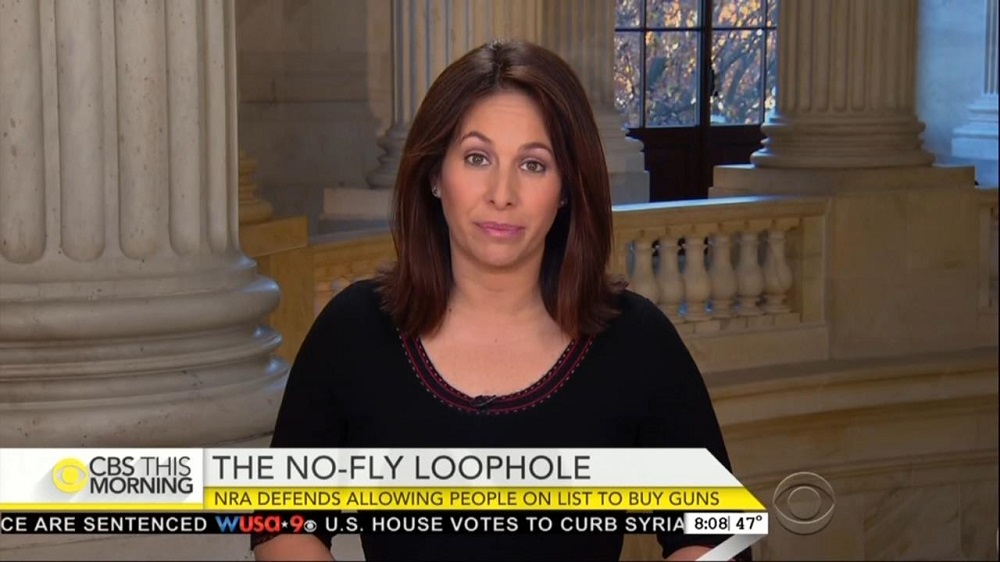 Friday's CBS This Morning hyped that "thousands on the government's terrorist watch list...bought firearms in the last decade...and all of the sales were legal." Nancy Cordes played up that a bill to "close that loophole" that has been introduced for eight straight years has "gone nowhere," due to opposition from the NRA and congressional Republicans. Cordes later hinted that House Speaker Paul Ryan and his GOP caucus had a double standard on national security, for opposing closing the "loophole," but supporting a bill to "beef up screening of Syrian refugees." [video below]

Anchor Norah O'Donnell led into the correspondent's report by underlining that "the Paris attacks...are also fueling the latest battle in Congress over guns and background checks. Thousands on the government's terrorist watch list — which includes the no-fly list — bought firearms in the last decade — think about that — and all of the sales were legal...that watch list is not enough to stop a gun sale."

Cordes played two soundbites from Democratic Senators Dianne Feinstein and Dick Durbin, who voiced their support for the gun control bill at a recent press conference. She read a sentence from the NRA's statement on the legislation, but didn't include any clip from a Republican specifically speaking out against the bill. The CBS journalist also included a snippet of her question to Speaker Ryan on the proposal:

CORDES (voice-over): Democratic Senator Dianne Feinstein calls closing the loophole a no-brainer. Originally backed by the Bush administration, the bill would give the attorney general the power to deny the sale, delivery, or transfer of a firearm to anyone known or suspected to be a terrorist. The bill would apply to the approximately 420,000 people on the federal government's terror watch list.

A recent government study found that over a ten-year period, the FBI conducted more than 2,000 firearm background checks on people whose names were on the watch list. Less than 200 were denied, and for reasons unrelated to the list.

SEN. DICK DURBIN, (D), ILLINOIS (from press conference): To think that we have this loophole or gap in the law is unimaginable.

CORDES: Republicans have long argued that a bill like this would infringe on Second Amendment rights. A 2009 Justice Department audit showed 35 percent of the names on the watch list should not have been there in the first place. In a statement to CBS News, the National Rifle Association said, 'The legislation does nothing to prevent terrorist attacks, and would deny law-abiding citizens their constitutional rights without due process.'

House Speaker Paul Ryan, who passed a bill yesterday to beef up screening of Syrian refugees, was non-committal on the gun bill.

CORDES (on-camera, from press conference): You said it's better to be safe than sorry. Is this something that you'd support?

REP. PAUL RYAN, (R), SPEAKER OF THE HOUSE: This is the beginning of all this process. The task force is taking all suggestions from Democrats and Republicans.

CORDES (live): When a firearms purchase is checked against the terror watch list, it does end up helping investigators, because that application includes a Social Security number; it includes a name, an address — and it even pinpoints where the request was made — and that's information...that agents may not have had before. 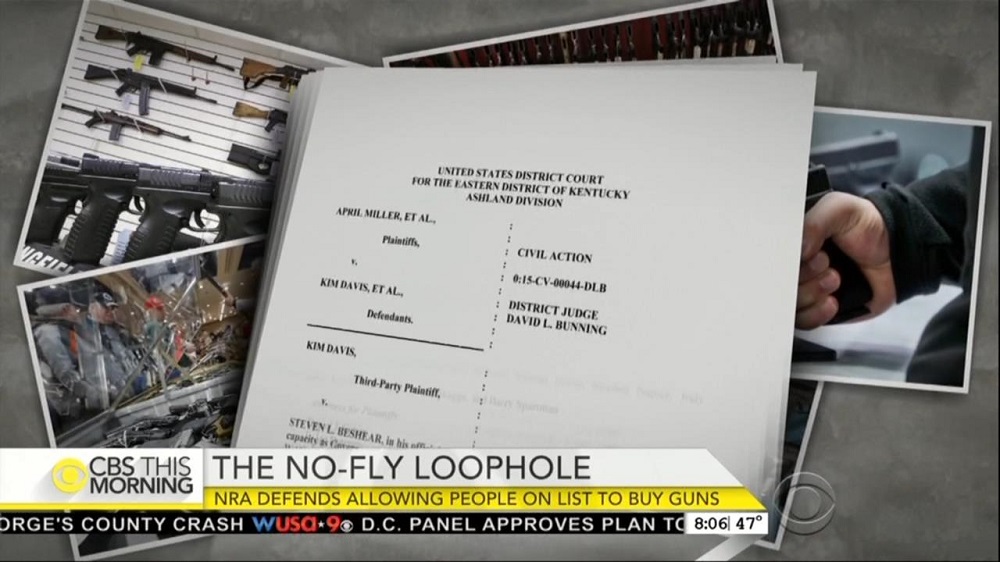 CBS got tripped up during Cordes's segment, as the network included a graphic that purportedly included a screen capture from the proposed gun control legislation. In reality, it was ta cover page from a document in the ongoing federal lawsuit between a homosexual couple and Kentucky clerk Kim Davis [see screen cap at right].

On Thursday, the Wall Street Journal's James Taranto pointed out that the New York Times (CBS News's polling partner) has an actual double standard regarding the terror watch list. Taranto cited a December 16, 2013 editorial from the liberal newspaper which slammed the list as a "shrouded and unaccountable system." He continued with a quote from a November 18, 2015 item by Times editorial board member Francis X. Clines, who bewailed the "egregious loophole that Congress has failed to close has allowed over 2,000 suspects on the federal terrorist watch list to freely buy firearms." Clines then wondered whether "the Paris carnage will jar the [gun control] legislation into motion."

The 2013 editorial also spotlighted how "Nelson Mandela remained on one terrorist watch list until 2008, when Congress removed him through special legislation." Besides Mandela, Senator Ted Kennedy, conservative writer Stephen Hayes, and other prominent people have been inadvertently included on government watch lists in the past.