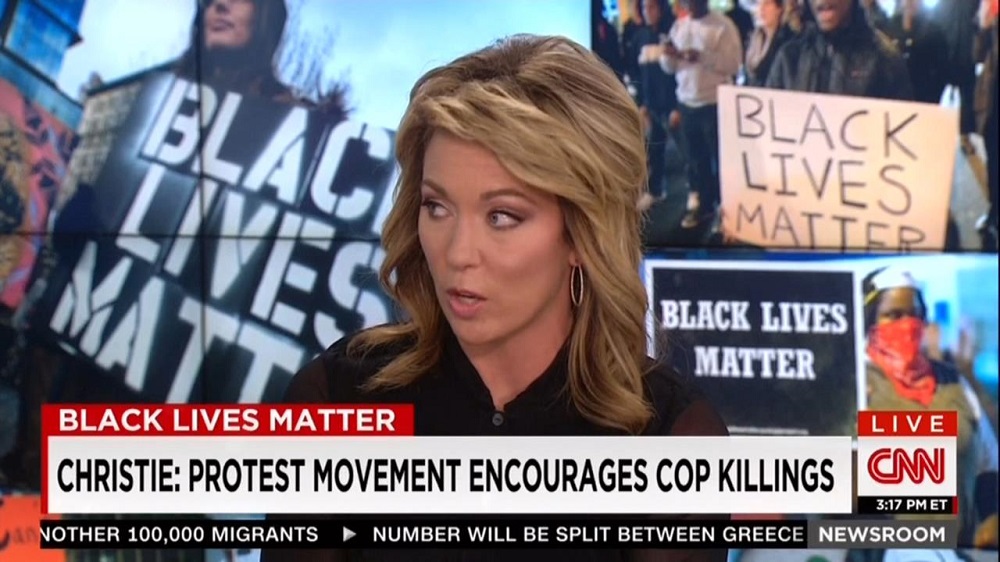 On Monday's CNN Newsroom, Brooke Baldwin rebuked a guest who bluntly labeled Michael Brown a "thug." Former DEA agent David Katz underlined that Darren Wilson was "by all accounts, a good police officer — did exactly what an officer is supposed to do. He was set upon by a thug named Michael Brown, who just moments before, strong-armed an Indian-American half his size." Baldwin interjected, "Come on, though. We don't need to call — let's not — 'thug'?" Katz retorted, "What epithet would you charge?" The anchor replied, "Let's just say 'Michael Brown.'" [video below]

Baldwin brought on Katz for his take on Republican presidential candidate Chris Christie's recent criticism of the "Black Lives Matter" movement ("Black Lives Matter" activist Melina Abdullah also appeared during the segment). The journalist noted how FBI Director James Comey spotlighted how "police officers are worried about being the bad guy in the video. And so, perhaps, they're not being as proactive as they should be." She asked, "Are you surprised at what he said?" The former federal law enforcement officer responded with his shot at Michael Brown, which led to Baldwin's objection:

BROOKE BALDWIN: David, turning to you — you know, we've heard now from the FBI director, [James] Comey, multiple times talking about — you know, the Ferguson effect. He calls it the 'chill wind' on a lot of officers. And he's — you know, he's the one in the know. He's talking to police chiefs across the country, and because of the crimes rising — granted, it's low generally — but in certain cities, there's been an uptick — you know, just saying that police officers are worried about being the bad guy in the video. And so, perhaps, they're not being as proactive as they should be. Are you surprised at what he said?

DAVID KATZ, FORMER DEA AGENT: Well, I'm kind surprised he came out so openly, but he's a hundred percent correct. Let's look at the actual, seminal incident that launched the 'Black Lives Matter' movement. And, by the way, the concept of state-sanctioned murder of black people — that's just offensive. But more to the point, in Ferguson, Officer Brown was it? No, I'm sorry. Officer Wilson—

KATZ: Darren Wilson went to work. He was a five-year veteran — by all accounts, a good police officer — did exactly what an officer is supposed to do. He was set upon by a thug named Michael Brown, who just — who just moments before, strong-armed an Indian-American half his size — who tried to take—

KATZ: Well, when you walk into a store and you steal—

BALDWIN: I understand. I just — language—

KATZ: And you, by force, intimidate, what — what epithet would you charge? A — you know—

KATZ: Okay. Let's say Michael Brown. I have my opinion. I'm not afraid to make it. He goes after the officer in his car. He tries to take the officer's weapon. The officer responds, and his career is ruined. And the attorney general of the United States of America sits in the funeral — at the funeral of that person who attempted to kill—

KATZ: Right. Is there — is there something that I'm not seeing that's wrong? Absolutely. Police officers on the street now — any time you're doing a law enforcement operation, it can go bad very, very quickly. There is no — the number of officers that intentionally do bad things — are there? Yes, there are. But the number is — is minuscule. So, in these instances, law enforcement is not pretty. Things can go back quickly. An officer says, well, I've got three years until retirement. I've got a family. I've got three kids. The first one's in college. No, maybe I'm going to back away a little bit.

It should be pointed out that CNN anchor Erin Burnett actually defended the use of the word "thug" on the April 28, 2015 edition of her program. Guest Carl Stokes, a city councilman for Baltimore, Maryland, likened the term to the N-word.