Sarah Palin called out her liberal/Democratic critics in a Twitter post on Monday for firing the "1st shot in the real 'war on women.'" Palin zeroed in on an excerpt from Hillary Clinton's new book Hard Choices, where the former first lady asserted that she refused to attack the then-Republican vice presidential candidate, mere hours after John McCain named her as his running mate.

Mrs. Clinton first noted that "the Obama campaign suspected that her [Palin's] nomination was a blatant attempt to scuttle their hope of welcoming the women who had vigorously supported me [Clinton]," and spotlighted how the operatives of her former primary opponent tried to get the former senator to join their offensive:

...They [the Obama campaign] immediately issued a dismissive statement and reached out to me in the hopes I would follow suit. But I wouldn't. I was not going to attack Palin just for being a woman appealing for support from other women. I didn't think that made political sense, and it didn't feel right. So I said no.... 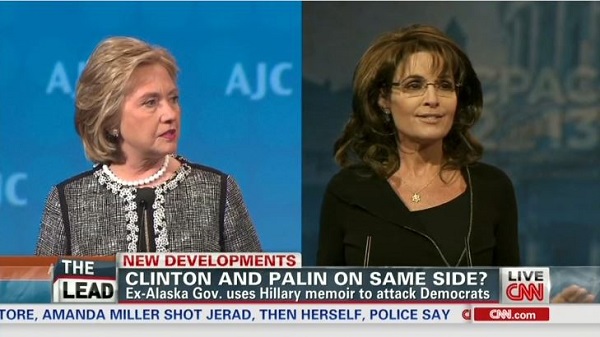 By contrast, the liberal media was quick to join the attack on the former Alaska governor. Minutes after Senator McCain appeared for the first time with Palin, John Roberts implied on CNN Newsroom that Republican politician might neglect her Down's syndrome baby. However, back in 2003, Roberts had boosted Mrs. Clinton as a potential presidential candidate on CBS's Early Show.

At the end of Palin's excerpt from the new book, the former New York senator noted that "a few hours later, the Obama campaign reversed itself and congratulated Governor Palin." Actually, Mr. Obama apologized for his campaign's "hair trigger" response to the announcement.

Days later, Politico reported that then-First Lady Laura Bush expressed her concern that both Democrats and the media would launch sexist attacks on Mrs. Palin:

First lady Laura Bush said today that sexism aimed at Sarah Palin was a very real prospect and suggested Democrats watch what they say about the Alaska governor and John McCain's ticketmate.

"The other side will have to be particularly careful," Bush said in an interview on Fox News from St. Paul, "because that’s something we all looked at."

Questioned about whether Palin may face sexism from the media in the way Hillary Rodham Clinton supporters claim she did, Bush said: "I think that's a possibility."