CBS: 2 Million Forced Out of Health Plans By ObamaCare 'Just The Tip of the Iceberg'

Tuesday's CBS This Morning repeatedly played up how "more than two million Americans are losing their current health care coverage because of ObamaCare". Jan Crawford outlined that "this is just the tip of the iceberg. And the people who are opening these letters are shocked to learn they can't keep their current policies, despite the President's assurances to the contrary."

Crawford underlined that "the White House is on the defensive, trying to explain how, when the President repeatedly" used his now-infamous "if you like your insurance plan, you will keep it" promise, "he really didn't mean it." She didn't disclose, however, that her featured "industry expert" is an alumnus of the Clinton administration. [MP3 audio available here; video below the jump]

Anchor Charlie Rose led with the two million figure during his tease for the CBS correspondent's report, but stopped short of calling out the President: "CBS News confirms more than two million Americans are losing their current health care coverage because of ObamaCare. Jan Crawford uncovers new information on what could be a broken promise." Could be?

Co-anchor Norah O'Donnell also pointed out that this number is "more than triple the number of people said to be buying insurance under the Affordable Care Act, which the President himself calls ObamaCare." Crawford continued with her "tip of the iceberg" line, and soon played a clip of one of the many times President Obama made his promise, along with White House Press Secretary Jay Carney's recent spin trying to cover it up. 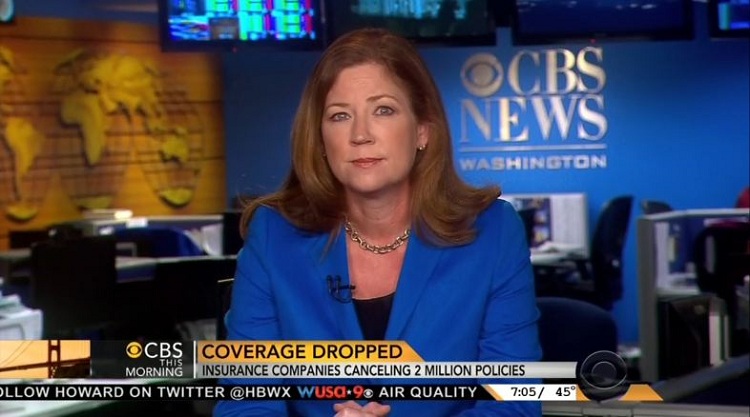 The journalist then outlined what she labeled the "unexpected reality" of ObamaCare. Actually, it's not that "unexpected", as NBC News revealed that the Obama administration knew for years that millions of Americans wouldn't be able to keep their current plans (Crawford didn't report this development during the segment):

JAN CRAWFORD: It's an unexpected reality of ObamaCare, being told through though anecdotes in local papers and on social media. But the hard numbers reveal the evidence is far more than anecdotal. CBS News has confirmed with insurance companies across the country that more than two million people are getting notices they no longer can keep their existing plan – in California, 279,000; in Michigan, 140,000; Florida, 300,000; and in New Jersey, 800,000. And those numbers are certain to go even higher. Some companies tell us they've sent letters, but they won't tell us how many.

Near the end of her report, Crawford played two soundbites from Larry Levitt with the liberal Kaiser Family Foundation. She identified Levitt as one of many "industry experts", but failed to give his organization an ideological label, along with his past occupation inside the Clinton White House. The "expert" did his best to find the silver lining to the situation: "The winners outnumber the losers here. But because of all the website problems, it's really hard to find out who those winners are, because they don't even know it themselves."

[Update, Tuesday, 4:25 pm Eastern: the full transcript of Jan Crawford's report from Tuesday's CBS This Morning can be read at MRC.org.]