CBS Spins Obama's 'All-Time Low' Poll: 'Little He Can Do' With Gas Prices

Charlie Rose and Bob Schieffer were President Obama's Amen corner on the issue of gas prices on Tuesday's CBS This Morning. Rose shamelessly claimed, "The President has a point...There's little that he can do...in the short term to affect gas prices, and gas prices hurts his political chances." Schieffer replied, "That's right on all counts...the problem is...people think there are things he can do about it."

The morning newscast, as well as Monday's CBS Evening News, mentioned how "President Obama's approval rating is now at an all-time low," and as anchor Erica Hill explained, "one of the big reasons? Rising gas prices." Both programs, however, omitted mentioning the Democrat's rejection of the proposed Keystone XL pipeline, their slowing of drilling permits, his energy secretary's endorsement of higher gas prices (which he walked back later on Tuesday), or his party's backing of cap and trade.

Rose brought on Schieffer during a segment 14 minutes into the 7 am Eastern hour, and after playing a soundbite of the President claiming that "we don't have a silver bullet when it comes to gas prices," gave his "the President has a point" statement. In addition to agreeing with his colleague, the CBS veteran continued by spouting the left's own talking points on the issue and ignoring the President's own role in the matter, all the while acknowledging the sticker shock from millions of Americans: 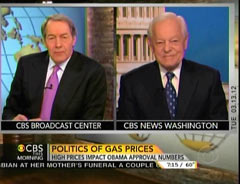 SCHIEFFER: I mean, the fact of the matter is, the reason gas prices are so high is because you have, you know, the turmoil that's going on in the Middle East; you have oil speculators; and you have China, which continues to buy more and more oil; and those are the things that are really keeping gas prices up. But people go to...that gas pump and they look at that gauge. I went myself the other day, Charlie, and bought my first $75 tank of gas, (Rose laughs) and I wasn't buying premium gas....

ROSE (laughs): Exactly- what kind of car are you driving?

SCHIEFFER: And there are a lot of folks around here that- I mean, I'm getting along fine; I'm not, you know, right now- but $75 for a tank of gas, and it stares you in the face, and it really makes you mad.

ROSE: And many Americans need their car to drive to work, and so, therefore, it hurts them in a very deep way.

Hill then asked Schieffer, "We know Newt Gingrich has been out there saying, look, I'm going to get gas down to the $2.50 mark....the White House...coming out and really hammering on that point. Are they getting nervous about where this narrative is going in the country?" He answered, in part, with the oft-used line that "people are frustrated with both sides. They don't see anybody riding to the rescue yet...even though the economy is looking better; even though the market is up; even though, you know, unemployment is coming down- going to that pump and looking at that $75 tank of gas...people are really nervous and they're really frustrated now."

The previous evening, CBS Evening News anchor Scott Pelley and correspondent Anthony Mason also did a segment on the President's low approval numbers 45 minutes into the 6 pm Eastern hour, and acknowledged that the chief executive could do something about the high gas prices, but only gave one example, and still gave cover for him:

PELLEY: But is there much that a president can do about the price of gasoline?

MASON: One thing a president can do is tap into the strategic petroleum reserves, Scott, our emergency oil supply. It's only supposed to be used in the event of severe supply disruptions, but President Obama did tap into it last June, and gas prices fell about three cents a gallon over the next two weeks. But they'd already been on their way down for a month, so it's difficult to tell, Scott, what impact that move actually had. 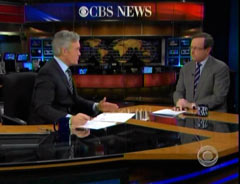 PELLEY: You were telling us last week about the role that Wall Street plays- people investing in oil futures.

MASON: It's a big one and it's growing, Scott. The amount of money being bet on oil prices going higher has hit record levels in recent weeks. By several estimates, it's added about $20 a barrel to the price of oil, or 50 cents to every gallon of gas at the pump. And there's not much, Scott, that the President can do about that.

The full transcript of the Bob Schieffer segment from Tuesday's CBS This Morning, which began 14 minutes into the 7 am Eastern hour, is available at MRC.org.