Host Larry King first turned to the leftist talk show host during a panel discussion which began 12 minutes into the 9 pm Eastern hour: “Stephanie, the President said the buck stops with him. Was that a good move today?” Miller immediately made her full Bush Derangement Syndrome apparent in her response:

MILLER: Well, it’s certainly a different move than we ever heard in the Bush administration. I never heard anybody taking responsibility for 9/11, for Katrina. I thought he stepped to the plate. And I couldn’t disagree with Paul Bremer [who appeared in the previous segment] more, Larry. I think he [Obama] is prosecuting the exact same way President Bush prosecuted the shoe bomber, Richard Reid, as a criminal. You don’t want to make them holy warriors. You want to prosecute them as what they are and that’s criminals, and that’s what Clinton did when he put the previous- you know, Cole bombers in jail, instead of letting them get away, like Osama bin Laden.

Actually, none of the suspects in the Cole bombing, which occurred on October, 12, 2000, were caught during the last three months of Clinton’s presidency. Most of those who conspired in the plot have actually escaped any punishment for the crime. Craig Whitlock of the Washington Post recounted the following about the aftermath of the attack in a May 4, 2008 article:

...U.S. and Yemeni investigators soon identified the ringleader of the attack as Abd al-Rahim al-Nashiri, a Saudi national of Yemeni descent who served as al-Qaeda’s operations chief in the Arabian Peninsula.

At the time, Yemeni authorities insisted that Nashiri had fled the country before the Cole bombing. But a senior Yemeni official said that was not the case and that Yemeni investigators had located Nashiri in Taizz, a city about 90 miles northwest of Aden, soon after the attack. The official said Nashiri spent several months in Taizz, where he received high-level protection from the government. “We knew where he was, but we could not arrest him,” said the official, who spoke on condition of anonymity because he feared retaliation.

Nashiri eventually left Yemen to prepare other attacks on U.S. targets in the Persian Gulf, U.S. officials said. He was captured in the United Arab Emirates in November 2002 and handed over to the CIA. He was detained in the CIA’s secret network of overseas prisons until he was transferred to Guantanamo Bay in September 2006.

Whitlock later outlined that in early 2006, “[Yemeni] prison officials announced that 23 al-Qaeda members, including most of the Cole defendants, had vanished. They escaped by digging a tunnel that snaked 300 feet to a nearby mosque.” So, contrary to Miller’s extravagant claim, Clinton didn’t “put the previous...Cole bombers in jail.” In fact, if the talker wanted to launch a legitimate criticism of the Bush administration, she could have criticized their protracted and ineffective handling of the extradition and prosecution of the Cole terrorists. But, given her left-wing position, she’s much happier attacking former President Bush for something he did right.

Later in the segment, Bay Buchanan, who was also participating in the panel discussion, responded in kind to Miller by upholding the Bush administration’s approach to Islamic terrorism and blasting the current Obama administration’s handling of the issue: “We just heard that the administration did a whole lot going on behind the scenes....a few days after this event, they sent the homeland security director on national television, misleading the Americans, saying- oh, the system worked fine, and...added....well, maybe this is good news here, a silver lining, that we will now have a sense of urgency. You can say what you want about Dick Cheney. You can say what you want about George Bush. We had a sense of urgency and it’s clearly been lost in the last year.”

The talk show host, along with fellow left-wing panelist Marc Lamont Hill, struck back at Buchanan: 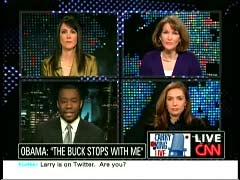 MILLER: Are you kidding me?

MILLER: What George Bush- that was a sense of urgency? He sat in a classroom looking like he went in his pants, for God’s sakes-

MILLER: And it took him how many minutes to respond? Then he flew away from the danger. He flew over Hurricane Katrina how many days after it happened? I mean that’s ridiculous.

BUCHANAN: Yeah, we- he was on-

MILLER: The President [Obama] responded when he had the information and he responded to (unintelligible, as King talks over Miller) correctly.

After a commercial break, Miller resumed her attack on Bush and his administration after the other conservative on the panel, Amanda Carpenter, suggested that the Obama administration needed to increase the pressure on Yemen after the attempted underwear bombing.

KING: Amanda Carpenter, let’s start with you. What does the President do about Yemen?

AMANDA CARPENTER: Well, I think what he’s got to do is get some kind of promise that they will start producing some members of Al Qaeda. There’s reports earlier this week that they arrested three people, but I think we’re going to need a heck of a lot more than that before we start sending troops in ourselves.

MILLER: Well, you know- yeah, I mean, I think this points up, though, Larry, exactly why the Bush administration had the wrong strategy on terrorism and they have no grounds to criticize the President now. The worst security failure in our history happened on their watch, despite numerous warnings. Then they let the people behind it go at Tora Bora, attacked the wrong country, in Iraq. They have no credibility on this matter.

MILLER: What are we going to do, bomb every country? Are going to bomb Yemen now?

MILLER: We need to fight a tough, smart war on terror and we need intelligence sharing. That’s what we need.

Speaking of being “smart,” that is exactly what Miller isn’t concerning the history of the U.S.S. Cole bombing.