CNN Questions 'Rationality' of Tea Parties, Hints They're 'Out of Step' 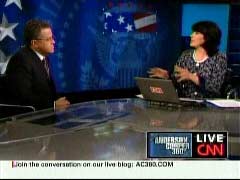 On Wednesday’s Anderson Cooper 360 program, CNN’s Christiane Amanpour and Jeffrey Toobin voiced their skepticism about the hundreds of Tea Party protests across the U.S., with Toobin stating how it was “disturbing” that there was a “edge of anger at the government” at the rallies. He continued, “There is a real -- a real hostility that is not just politics as usual among some of these people....I think it’s indicative of trying to tap into an anger that’s beyond rationality on a part of a small group of these people.” Amanpour also asked if the protesters were “really out of step with the majority of Americans.”

Amanpour, filing in for host Anderson Cooper, began the segment just after the beginning of the 10 pm Eastern hour of the CNN program. Before turning to Toobin, she brought on the network’s senior political analyst David Gergen and asked him a cynical question about the Tea Parties: “David -- is this, David, a grassroots movement, or is it something just whipped up for this moment?” Gergen began with an admission: “Well, Christiane, at first, I must confess, I did not take these very seriously. But they do seem to have gained traction in the last couple of weeks. And they have -- I think they are giving expression to what is a groundswell of a vocal minority, who are increasingly alienated and opposed to what the president is proposing -- is putting forward, the agenda he’s advancing.”

The analyst continued with a prediction about the future of the Tea Party movement: “I don’t think this is mostly about taxes. I think it’s about the general direction of bigger deficits that may lead to more taxes and more government....Could it grow bigger? Of course, it’s going -- it is going to grow bigger, because, one day, you know what? The Obama administration is probably going to have to propose higher taxes. It’s the only way you can close these deficits.”

Amanpour made a more subdued version of her colleague Susan Roesgen’s point about the Obama tax reductions to Toobin: “So, David is talking about higher taxes potentially, and that this is probably not all about taxes. But it does come at a time, right now, when President Obama has actually slashed taxes. What are they doing?”

The senior legal analyst thought it was “perfectly legitimate” that the majority of the Tea Party protesters were “clearly very angry about bailing out these big companies -- too much regulation, too much Washington.” But he then brought in the specter of the “anger that’s beyond rationality.” As an example, he cited Texas Governor Rick Perry’s light crack about secession at an Austin, Texas Tea Party.

AMANPOUR: And how real is that?

TOOBIN: Well, I mean, it’s fantasy. We fought a civil war about that. And -- but I think it’s indicative of trying to tap into an anger that’s beyond rationality on a part of a small group of these people.

Near the end of the segment, the substitute anchor asked Gergen, “Are these protesters really out of step with the majority of Americans? We just saw...that 62 percent of the people here approve of the president’s handling of the economy, and that Americans rate taxes, incredibly at, the very bottom of the most important economic issues right now.” The analyst was reluctant to write off the protests: 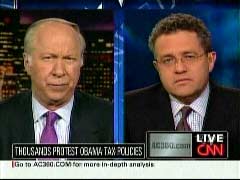 GERGEN: These protesters do represent a minority, but it is not a tiny minority....About a quarter to 30 percent of Republicans approve of what President Obama is doing, which is pretty high in some ways, but, nonetheless, about two-thirds to three-quarters of Republicans don’t. So, you’re talking about a -- a significant piece of the population that is having -- you know, is -- is in some opposition. I don’t think that’s a dismissible group.

I -- to go back to Jeff Toobin’s point, which I think is right, there -- this is a piece, though, of a lot of anger that’s free-flowing in society. Some people are angry at the government. There are a lot of people out there, as Jeffrey knows, who are angry at Wall Street. You know, so, there is -- in this kind of -- these hard times, resentments do grow....So, this is not totally unusual. I think that President Obama is going to have to just sort of -- this is going to be just part of the landscape. That does not mean he does not have a significant majority behind him. He still does. He has well over 60 percent. And, very importantly for him, it’s not just the great majority of Democrats who are supporting him. Right now, a significant majority of independents are supporting him, well over 60 percent.