No one has ever accused Joe Biden of being a genius—evil or otherwise.

But, at least as of this morning, the same cannot be said of Ron DeSantis. On today's Morning Joe, Mike Barnicle, with Claire McCaskill concurring, conferred the "evil genius" sobriquet upon the Florida governor.

As Joe Scarborough put it, DeSantis' sin is to "bait" Democrats and the left into a debate over race and sexuality issues in the context of public education. Fumed a frustrated Scarborough: "And suddenly, he's the savior of the great moral majority, or whatever he'd want to call it."

In making the case against DeSantis, Scarborough went so as to defend the 1619 Project. Devised by Nikole Hannah-Jones and published by the New York Times, the 1619 Project, in its own words, "aims to reframe the country’s history by placing the consequences of slavery and the contributions of black Americans at the very center of our national narrative."

The Project has been largely debunked by leading historians, something Scarborough grudgingly acknowledged: "There was some language that may, may not have been exactly right." May, Joe?

But Scarborough immediately went on to hail "what 1619 has brought to the debate." And just what is that, other than to brand the United States, from even before its founding, as an intrinsically racist and deeply flawed society?

And whereas some defenders of Critical Race Theory deny that it is taught in schools, although the evidence is that its principles are indeed taught without attaching the CRT label, the same cannot even be claimed regarding the 1619 Project. To the contrary, there is an extensive 1619 Project curriculum that can be, and is, used in public schools.

The 1619 Project is also explicitly opposed to American capitalism, accusing it of "brutality."

In sum, the 1619 Project can be seen as a litmus test. No one who promotes it can or should ever be seen as a conservative. Can we, once and for all, strike Scarborough from the ranks of conservatives, despite his continuing claims to be one? 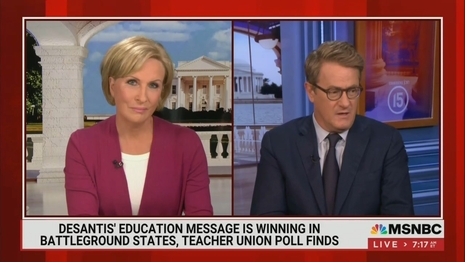 Mika Brzezinski opened the segment by citing polls regarding DeSantis's supposedly "controversial" positions on education. The results showed that by huge majorities, people agree with him that "public schools should focus less on teaching race, and more on core subjects [and that] schools should be banned from teaching sexual orientation and gender identity to kids in kindergarten to third."

What's "controversial" about those positions, Mika—unless you're a hardcore leftist!?

Come to think of it, you could say that there is one person who has cast Joe Biden as a genius—Joe Biden himself! On the campaign trail, he bragged about his IQ. And he boasted about his brilliant academic career--until those claims were revealed as lies.

Morning Joe calling Ron DeSantis an "evil genius," and Joe Scarborough defending the 1619 Project, was sponsored in part by Abbott and Trivago.

A poll conducted by Hart research found that voters by a 32-percentage point margin, said they were more likely to vote for candidates who believe public schools should focus less on teaching race, and more on core subjects. By 27 points, they said schools should be banned from teaching sexual orientation and gender identity to kids in kindergarten to third. I still want to know, do they teach that? Do they teach that?

JOE SCARBOROUGH: It's not just this issue, Mika. It's other issues.

SCARBOROUGH: It's the cultural issues that are trapdoors for, I'll say not just Democrats, but a lot of people in the media --

SCARBOROUGH: -- who oversimplify an issue.

SCARBOROUGH: And play right into Desantis' hands . . . DeSantis is great at setting this up, so he gets to take on the media. He gets to take on the supposed left, when it's only the most progressive wing of the Democratic party. And suddenly, he's the, he's the savior of, of the great, you know, moral majority or whatever he'd want to call it. And it is just -- it is, DeSantis baits the left. And, and, that's why he has over $100 million right now in his campaign.

SCARBOROUGH: The thing that I know concerns you, and it concerns me, and it should concern all Americans, that issue on race. Because --

SCARBOROUGH: We're just now starting to talk about race . . . You look at 1619. Yes, there was some language that may, may not have been exactly right. But you look at what 1619 has brought to the debate. And now, suddenly, teachers are afraid to talk about race in classes? That does seem outrageous, doesn't it?

MIKE BARNICLE: What's your thought about the really, sort of evil genius that some Republicans -- we're talking about Ron DeSantis here in this case -- have managed to inflict issues that have nothing to do with the daily education of students.