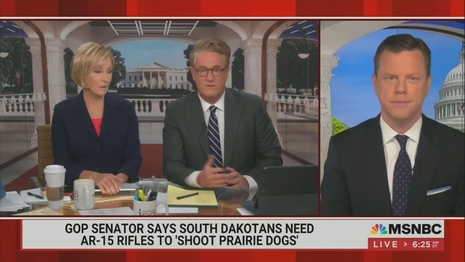 Joe Scarborough is at it again: getting fixated on a word or phrase, and repeating it ad nauseam. Joe might think he's being clever or impactful, but eventually, people become inured and bored by his endless repetition. We've documented sad Scarborough's verbal compulsions before, on everything from "bedbugs" to "toilets."

Scarborough's Morning Joe hobby horse o' the day was "prairie dogs." In the first hour, the panel pronounced the term no fewer than 19 times. It came in the context of denouncing Sen John Thune (R-S.D.) and other Republicans who decline to ban "assault weapons" because they say their constituents use AR-15s and similar rifles to shoot, yup, prairie dogs, feral pigs, and other varmints.

Mika  Brzezinski and Willie Geist also saddled up on Joe's "prairie dog" hobby horse, both repeatedly mentioning the rascally rodents. The normally even-keeled Geist seemed unusually passionate about placing restrictions on so-called assault weapons such as AR-15s. "Yeah, you can shoot a prairie dog with a shotgun. You don't need an AR-15 to vaporize a family of prairie dogs," he said. "That's just for anybody who knows about guns and how to control their land."

And, upping the ante, Mika even raised the specter that Sen. Thune's South Dakota constituents might next attack prairie dogs with...land mines! "People need land mines in South Dakota. Why don't you use a few of those, and watch the prairie dogs blow up?" This reminds us of those hayseed movie critics who like it when things "blowed up real good!"

What will Mika anguish about next: farmers going full Putin and deploying tactical nukes on prairie dogs?

Morning Joe's endless repetition of "prairie dogs" in the context of denouncing Republicans unwilling to place restrictions on "assault weapons" was sponsored in part by IHOP, Xfinity, Dove, and Applebee's.

JOHN THUNE: In my state [South Dakota], they use them. They shoot prairie dogs, you know, other types of varmints, and so, I think there are legitimate reasons why people would want to have them.

MIKA: People need land mines in South Dakota. Why don't you use a few of those, and watch the prairie dogs blow up? . . . To the senators who say it's important to have the need to blow up prairie dogs, and pigs.

SCARBOROUGH: Geez . . . Why shouldn't my constituent still be able to use that gun to shoot a pig, or varmints, I guess varmints, prairie dogs. Give me a break. A prairie dog would disintegrate. They're talking about feral pigs and prairie dogs? It's, it's disgraceful. They wanted to protect their constituents' right to shoot prairie dogs and varmints.

GEIST: Yeah, you can shoot a prairie dog with a shotgun. You don't need an AR-15 to vaporize a family of prairie dogs. That's just for anybody who knows about guns and how to control their land. But that was so stark yesterday, Joe. Something about the term, prairie dogs. I've got to protect the right to vaporize prairie dogs . . . And that's why you hear about things like prairie dogs.

MIKA: You think those guns need to be used for prairie dogs and varmints?

SCARBOROUGH: These weapons of war that John Thune says need to be used on prairie dogs?

GEIST: They would turn and say, but we need them for prairie dogs.