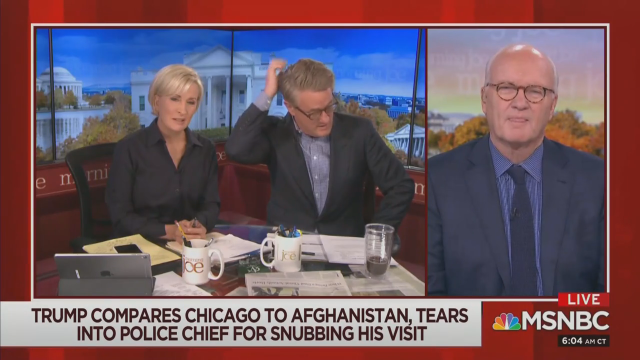 Joe Scarborough has a verbal tic—or is it a tick?—about bedbugs. When President Trump's Doral resort was under consideration as the G-7 site, Scarborough, on multiple Morning Joe episodes, went on riffs about bedbugs at the hotel, playing off a lawsuit someone had brought about being bitten.

On today's Morning Joe, Al Sharpton managed to work Doral bedbugs into the conversation. That triggered Joe's bedbug obsession yet again. In the course of 90 seconds, the b-word was mentioned no fewer than 18 times. (Note: That's Joe in the screengrab scratching away an imaginary bug.)

Here's the transcript of Scarborough's latest obsession. Count for yourself:

AL SHARPTON: It’s interesting, he never attacks Russia but can he attack Chicago. He attacks Baltimore, saying it was full of rodents, forgetting had he a bedbug problem in his own hotel in the Doral in Miami. So, we all can be very selective when you have the bedbug king attacking an imaginary rodent in Baltimore —

JOE SCARBOROUGH: Have you seen — I just — I’m sorry, I hate to interrupt, but I just started itching when you said Doral. Willie, the bedbugs at Doral --

MIKA BRZEZINSKI: It's a problem.

SCARBOROUGH: It’s just amazing. Did you see the picture of that guy that actually spent the night at Doral, and all the bedbugs, they ate him up.

SCARBOROUGH: I remember when I was a young kid, I’d watch those movies they call piranhas, where people would be swimming in this peaceful -- and, pow! Eat 'em up. I mean, that must have been how it felt for that poor guy

MIKA: Crawling all over him.

MIKA: Yeah, he'd have a much better time there.

SCARBOROUGH: It is really bad. The bedbugs at Doral, Mike Barnicle, really unbelievable. In fact, I’m having to scratch because the bedbugs, all the bedbugs, that whenever you say Doral I start itching because I just think about that poor guy and the bedbug problem they have down there.

Scarborough has a habit of getting on a verbal hobbyhorse and beating it to death, you should excuse the mixed metaphor. We've noted him in the past repeatedly: calling a Trump nominee a "fascist," accusing Republicans of being "unhinged," and trying to make "Moscow Mitch" the new moniker for Majority Leader McConnell.

If this Scarborough shtick was ever entertaining, by now it's—very—tired. Give it a rest, Joe.