Morning Joe on Rittenhouse: 'Extraordinarily Difficult for the Prosecution'

Much as the liberal media might celebrate the conviction of Kyle Rittenhouse — someone, as our Curtis Houck has documented, they have tried to brand as a white-supremacist vigilante — the MSM is grudgingly having to admit that conviction could be unlikely.

On Wednesday, we reported on Morning Joe suggesting that the prosecution's case against Rittenhouse was "falling apart."

Thursday on CNN, co-host John Berman's claim that the trial judge is "bonkers" was refuted by his own expert, who said that the judge's actions were appropriate. Moreover, that expert, defense attorney Joey Jackson, said that Rittenhouse's testimony was "excellent," and that he had helped himself "very much."

Coleman said that the defense should be "feeling pretty good" going into closing arguments. And Scarborough capped the bad news for those calling for a Rittenhouse conviction by saying that things are "going to be extraordinarily difficult for the prosecution."

The lone holdout, trying to make some kind of case against Rittenhouse, was ex-Sen. Claire McCaskill. But the Democrat misstated both the facts and the law.

As for the law: when Scarborough suggested that the prosecutors had overcharged the case, McCaskill claimed that the lesser charges were automatically included. Except that is not true under Wisconsin law. 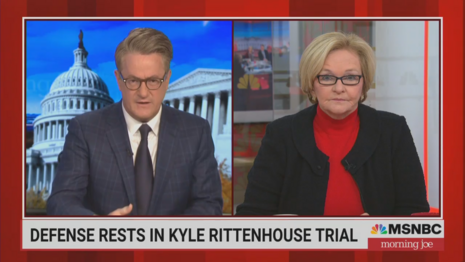 As for the facts: McCaskill claimed that "there is "certainly substantial evidence that Rittenhouse was intent on killing someone."

In fact, no such evidence was introduced. To the contrary, former prosecutor Coleman stated that there was evidence that prior to the shootings, Rittenhouse acted with "appropriate regard for human life."

If and when Rittenhouse is acquitted on some or all charges, stand by for liberal gnashing of teeth rivaling that on Election Night when Republican Glenn Youngkin defeated Democrat Terry McAuliffe for the Virginia governorship!

On Morning Joe, former prosecutor Charles Coleman, and Joe Scarborough admitting that the prosecution is facing an "uphill battle" in attempting to convict Kyle Rittenhouse was sponsored in part by Tylenol, Amazon, Ameriprise, and Comcast.

CHARLES COLEMAN: If I'm the defense on this case, I think I'm feeling pretty good going into [closing arguments], because one of the things you have to realize is, all they need to be able to sway one juror, and I think in this case they may have more than one.

The defense is going to bring up everything, every step, every minute, every action that Kyle Rittenhouse took, even before the confrontation which showed that he was acting in a way where he had actually the appropriate regard for human life, and that he acted, according to them, it's going to be a matter of self-defense. So that's the uphill battle that the prosecution's going to have to climb.

CLAIRE MCCASKILL: What you always have to remember when you're charging a homicide case, is that in the charge, you are including other charges.

And it's all about state of mind. Whether it is intentionally, whether it is recklessly, whether it's negligently. And so, I am not sure this prosecutor mischarged the case, because he's going to have an opportunity to argue whichever state of mind he thinks the strongest evidence presents. And there's nothing wrong with arguing, obviously. There's certainly substantial evidence that he was intent on killing someone, as he roamed the streets with his military-style weapons.
. . .

SCARBOROUGH: So Claire, as you look at the charges for murder. In each one of the cases, you see the defense has effectively called witnesses and others to suggest that, actually, Rittenhouse was being charged at, or felt like he was. So, that is going to be extraordinarly difficult for the prosecution.