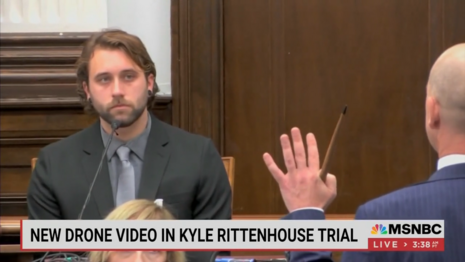 This, as Morning Joe largely had to admit today, was the sound of the case against Kyle Rittenhouse disintegrating:

Rittenhouse defense attorney: "It wasn’t until you pointed your gun at him—advanced on him—that he fired, right?”

The major mystery here isn't whether Rittenhouse is guilty. It's how the prosecution ever brought much of the case against him in the first place. Because Gaige Grosskreutz [seen in screencap], the person who in the statement above admitted that he drew first, was a prosecution witness!

It would be malpractice for a trial attorney not to have carefully interviewed his witness before putting him on the stand, to the point that he would know virtually everything he would say in court. So either the prosecutors were incredibly inept, or in the post-George Floyd political climate, they succumbed to pressure to prosecute Rittenhouse despite their awareness of this fatal flaw in their case.

And, much as it must have hurt them to do so, the Morning Joe crew had to admit the undeniable today: that Grosskreutz's admission was devastating to the prosecution.

Next was Mika Brzezinski, who said that Rittenhouse "appears to have an effective claim" of self-defense, with "evidence to back it up."

MSNBC legal analyst Tali Farhadian Weinstein—a former Obama Justice Department lawyer—agreed: "He’s got some good facts on his side . . . I do think that the prosecution has some real challenges here." I'll say!

Willie Geist then drove the nail into the coffin: "if you’re the prosecutor, sitting and listening to that testimony, does your case start to fall apart a little bit?" Yes. Just like the Titanic sunk "a little bit" when it hit that iceberg.

The only bitter-ender, still trying to make a case against Rittenhouse, was Mika's husband and co-host. But unfortunately for him, Joe Scarborough experienced a Joe Biden moment, literally being unable to tell up from down.

In saying that Rittenhouse had shot Joseph Rosenbaum when he was laying on the ground, Scarborough said that Rosenbaum was:

At the end of a trial, defense attorneys often move for a directed verdict. Meaning that they ask the judge to impose a verdict of innocent given the overwhelming evidence in favor of the defendant. Such motions are routinely denied. But in this case, it wouldn't be surprising if the motion were made and granted, at least insofar as the charge against Rittenhouse relating to Grosskreutz.

Morning Joe admitting that the testimony of a prosecution witness that he drew first before being shot by Kyle Rittenhouse was a huge blow to the case against him was sponsored in part by Jeep, ADT, and Celebrity Cruises.

GABE GUTIERREZ: Prosecutors have tried to portray rittenhouse as an aggressor who was looking for trouble. But at times, especially during cross-examination, the witnesses bolstered Rittenhouse’s claim of self-defense.

RITTENHOUSE DEFENSE ATTORNEY: It wasn’t until you pointed your gun at him, advanced on him, with your gun, not your hands down, pointed at him, that he fired, right?
. . .

MIKA BRZEZINSKI:Joining us now, MSNBC legal analyst, ms. Weinstein, she worked as a federal prosecutor in the Obama Justice Department, and as general counsel at the Brooklyn DA’s office.

TALI FARHADIAN WEINSTEIN: Now we really are getting to the heart of the case, which is the claim about self-defense. And, you know, it is interesting, right – go ahead.

MIKA: Well, that’s exactly where I was going to go with my next question. Is that it appears to be an effective claim when you have the, you know, survivor of the three who were shot, I mean, that is one piece of the trial that we are showing on television. So clearly, there’s much more context to explain, but they seem to be headed in that direction in a big way and have evidence to back it up!

WEINSTEIN: Indeed. He’s got some good facts on his side. We have the survivor who said that he did point his gun at Rittenhouse, and there is some evidence that one of the deceased, Rosenbaum, ran toward him. And of course Rittenhouse is going to say he was running toward my gun

WILLIE GEIST: That witness said, yes, I did unholster my concealed weapon. I had it in my hand when I confronted Kyle Rittenhouse. So if you’re the prosecutor, sitting and listening to that testimony, does your case start to fall apart a little bit because of what he just said?

WEINSTEIN: Well, first of all, he’s charged separately for each of the people that he shot at.

WEINSTEIN: So some of those cases may be stronger than others. But I do think that the prosecution has some real challenges here.

JOE SCARBOROUGH: Well, I mean, and in this case, you have someone with an AR-15 feeling like he's justified to use an AR-15 against somebody who is unarmed. And in the case of Rosenbaum, an unarmed man who is, quote, perpendicular – wait, no. Not perpendicular. Let’s see. Yeah, yeah: he was falling or perpendicular.

SCARBOROUGH: Horizontal, not perpendicular. He was horizontal when the fatal shots were fired.