Rittenhouse: CNN Calls Judge 'Bonkers,' But Expert Not Buying It

In the case of Kyle Rittenhouse, it's the second tough morning in a row for the liberal media, and good news for the defense.

Yesterday, we noted how Morning Joe had to acknowledge that the prosecution of Rittenhouse was "falling apart" after a prosecution witness admitted that the defendant hadn't fired until the witness pointed his gun at him.

This morning, it was CNN's turn to be in the barrel. New Day co-host John Berman tried to shift focus to what he described as the "bonkers" behavior of the trial judge, Bruce Schroeder. And repeated references were made to "criticism" that the judge had received. Some of that criticism came from Morning Joe, where Joe Scarborough called Judge Schroeder "an absolute joke."

But even CNN's own legal expert that New Day brought in wasn't buying it. Defense attorney Joey Jackson, a CNN legal analyst, stated that it was common for judges to harshly reprimand trial lawyers when they disobey instructions. And he opined that the prosecution had done just that. Jackson concluded by saying, "regardless of the criticism, I'm with this judge." And both Jackson and law professor Alexis Hoag said they thought Rittenhouse had helped himself by testifying, with Jackson adding, "very much." 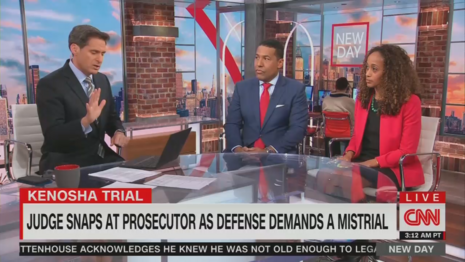 So much for Schroeder being "bonkers!"

Note also Berman observing that Rittenhouse "was extraordinarily well-prepared for this. It seemed as if he had gone over each and every aspect of this case multiple times and was surprised by nothing." Berman claimed he didn't mean that "pejoratively," but the implication hung in the air that Rittenhouse had been coached beyond normal bounds.

But in fact, if Rittenhouse was well-prepared, that was simply a matter of his lawyers doing their professional duty. Compare and contrast with the prosecution, which, incredibly, seemed unprepared for the fact that its own witness, one of the people shot by Rittenhouse, would admit on the stand that it was only after he drew his gun that Rittenhouse fired at him.

JOHN BERMAN: This morning, gripping moments and new questions about the dramatic testimony of Kyle Rittenhouse on trial for homicide. Rittenhouse took the witness stand in his own defense, and this is what the jury saw. Sobbing. His mother also appeared to cry as she looked on.

BRIANNA KEILAR: The other must-see moment came from the judge in this case. Throughout the day he unleashed on the prosecution, accusing them of a grave constitutional violation as they cross-examined the teenager. And at one point, the judge's cell phone rang out loud, playing the patriotic anthem, God Bless the USA. The judge's actions during the trial so far, now coming under scrutiny and raising questions about his behavior and demeanor.

SHIMON PROKUPECZ: But the other thing I think to look for today is whether or not the judge comes in this morning and says something about some of the things he said to the prosecutor. Because, from sitting in this courtroom and watching this judge, he's been very conscious about the media, and how the media has been covering this trial. He certainly has commented about it. So, I'm going to be curious to see if he responds to some of the criticism he's now receiving.

JUDGE BRUCE SCHROEDER: The problem is, this is a grave constitutional violation for you to talk about the defendant's silence. And that is--you're right, you're right on the borderline, and you may, you may be over. But it better stop.

PROKUPECZ: Lashing out at the prosecution for attempting to ask Rittenhouse questions related to evidence he already banned from the trial.

SCHROEDER: Don't get brazen with me. You knew very well -- you know very well that an attorney can't go into these types of areas when the judge has already ruled without asking, outside the presence of the jury, to do so. So don't give me that.

BERMAN: Counselor, let me start with you. How do you assess the decision to put Kyle Rittenhouse on the stand, and the results?
. . .

JOEY JACKSON: I thought it was very effective. I would say from a defense perspective, it was excellent.

BERMAN: I will say, and I don't mean this by means of praise or pejoratively: he was extraordinarily well-prepared for this. It seemed as if he had gone over each and every aspect of this case multiple times and was surprised by nothing.

Let's talk about the judge. Actually, let's play this, because I've never seen anything like this before, where a judge yelled quite like this. Oh, we don't have it. But you saw the judge going bonkers.

So how close to this third rail was the prosecution?

JACKSON: Extremely. And I think that they exceeded that . . . And I think, regardless of the criticism, I'm with this judge. I've been ripped apart before. I've seen attorneys being ripped apart before me. I'm not immune to it. Attorneys aren't immune to it. When you're in the court, you behave yourself appropriately. You follow the rules. Ane when you don't, get prepared to be undressed by the judge, and he did that.

BERMAN: We've got time for basically a one-word answer. On balance, did Kyle Rittenhouse help or hurt himself yesterday?

PROFESSOR ALEXIS HOAG: He helped himself.