If there's one thing Democrats and the liberal media would like voters to forget, it's Biden's disastrous withdrawal from Afghanistan. Thirteen US military members killed. Untold numbers of Americans left behind. The country quickly seized by the Taliban.

CNN did its part to advance Afghanistan amnesia this morning. In a New Day segment with poll maven Harry Enten on Biden's bad poll numbers, the Afghan elephant in the room was never acknowledged. Instead, the only possible explanation offered was by co-host John Berman, who suggested that the delta coronavirus variant has left Americans feeling less good about the fight against COVID.

Attempting to explain Biden's polling plunge without mentioning his Afghanistan fiasco would be like trying to explain Nixon's bad approval ratings in 1974 . . .  without mentioning Watergate. Note that in addition to omitting mention of Afghanistan, CNN also failed to acknowledge other obvious causes of Biden's plunging popularity: his failure to control the border, and rising inflation. By focusing exclusively on the delta variant, CNN was shifting the blame to something that might be considered out of Biden's control.

Although CNN swept Biden's Afghanistan mess under the rug, the general tone of the segment was decidedly downbeat for the prez. Berman introduced it by saying that Biden's poll numbers, "to use the technical term, are 'not good.'" That was his facetious way of saying they were in fact quite bad, a view immediately echoed by Enten. Berman went on to declare Biden's numbers "clearly underwater." Even more ominously, Enten described the huge plunge in Biden's approval among independents as "a very bad sign." 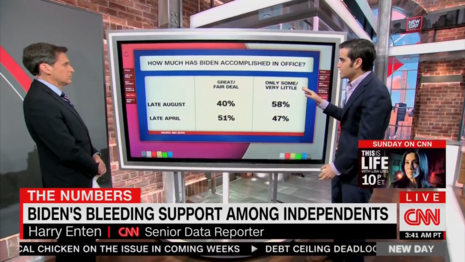 So give CNN some credit—at least in contrast with MSNBC's Mika Brzezinski. As we noted, on yesterday's Morning Joe Mika downplayed Biden's historic approval plunge to 38% in the Quinnipiac poll, calling it merely "a bit of a hit." Right— we might find out it's a "bit of a hit" like the Titanic took from that iceberg.

CNN attempting to explain Biden's approval-rating plunge without mentioning his Afghanistan fiasco was sponsored in part by SoFi, ServPro, Sandals, and Citi.

JOHN BERMAN: President Biden's poll numbers are, to use the technical term, not good [Harry Enten can be heard laughing.] And for Democrats, they are even more troubling numbers underneath the surface. Joining me now is CNN senior data reporter, Harry Enten. And the numbers here: they tell a clear story.

HARRY ENTEN: They do tell a clear story. Again, to use a technical term, not good. This is the trend in Joe Biden's job-approval rating. Look at August 1st: you know, the approval is at 51, the disapproval was at 43. That was a net right there of plus eight. But look at what happens. September 1: the net, minus two, the disapproval above the approval. And now, minus five. So essentially going in the wrong direction. Not good.

BERMAN: Clearly underwater at this point.

ENTEN: Look at this: among independents, he is down 19 points. He was in positive territory on August 1st at plus 3. He's now at ITAL minus 16 points net approval rating with independents. It's those folks in the center of the electorate who are driving this.

And what do you see here? You see that among independents—look at that—you see that Joe Biden won by 13 points. This was a group that Hillary Clinton lost by four. This was a massive change. 17-point movement toward Joe Biden. It was those voters in the center of the electorate who helped win him the election. And now that he is underwater with them, a very bad sign.

BERMAN: What are they seeing or not seeing?

ENTEN: I think this right here, how much has Biden accomplished in office so far? In late April, look at this, 51%, a bare majority but a majority nonetheless, said he accomplished a great or a fair deal. Now look at late August. Look at this. Down to just 40%. Now, the clear majority of voters saying, look at this. 58% say he's accomplished only some or very little. So they don't think that Joe Biden has gotten in office and done very much. .

BERMAN: I think vaccinations, which is a real push for the administration, and they got a lot of people vaccinated. In late August, with delta, people may have not been feeling as good about that. That may be driving that.