In 1901, after Leon Czolgosz assassinated President William McKinley, it took only seven weeks for him to be tried, convicted, sentenced, and executed.

How times have changed. Today, we apparently don't execute assassins: we release them.

That doesn't sit well—at all—with Joe Scarborough. On today's Morning Joe, Scarborough reacted vehemently to the news that a federal judge has ordered the unconditional release of John Hinckley Jr., who attempted to assassinate President Ronald Reagan in March 1981. Hinckley also shot and permanently disabled press secretary James Brady. When he died in 2014, the medical examiner ruled that he died of his 1981 injuries.

Scarborough was similarly outraged at the recommendation of a California parole board earlier this year to grant parole to Sirhan B. Sirhan, the Palestinian who assassinated Robert F. Kennedy in 1968 over his support of Israel.

"I do not understand what’s going on with parole boards, or whatever institutions are doing this. The guy that assassinated Bobby Kennedy and literally changed the arc of American history? He’s let out of jail, why? Why?  . . . The same thing for John Hinckley! We're, we're letting him out—unsupervised? I don’t even understand. Why? Letting political assassins out of jail, ever!? it is just one more bizarre ruling." 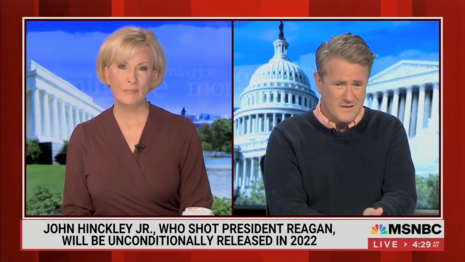 Mika Brzezinski ended the segment with what she aptly described as a "weird sidenote," mentioning that as a college sophomore she spent time every week with Hinckley at the mental institution where he was confined in DC.

Also weird: Mika never expressed support for Scarborough's opposition to the release of Sirhan or Hinckley.

MIKA BRZEZINSKI: The man who tried to assassinate President Ronald Reagan four decades ago will be free next year. A federal judge has agreed to lift all the remaining restrictions on John Hinckley Jr. next June, as long as he remains mentally stable and continues to follow the rules imposed by the court.

JOE SCARBOROUGH: I do not understand what’s going on with parole boards, or whatever institutions are doing this. But 2021? Sirhan Sirhan is let out? The guy that assassinated Bobby Kennedy and literally changed the arc of American history? He’s let out of jail, why? Why?

MIKA: He was paroled.

SCARBOROUGH: Why was he paroled? Why? Family was against it. Americans should be against it. It’s political violence. It kills a man, but it also shakes American democracy to its core, and shaped our history in a negative way. The consequences! We can't even begin to unpack all of the damage, all of the harm that Sirhan Sirhan did to this country.

You would say the same thing for John Hinckley! We're, we're letting him out— unsupervised? I don’t even understand. Why? Letting political assassins out of jail, ever!? Or attempted political assasins? It is, it is, it is one more, it is just one more bizarre ruling. I just don't understand.

MIKA: Weird sidenote: I spent time with John Hinckley at St. Elizabeth's when I was a sophomore in college working in the mental institution. Every Wednesday.