Merry Christmas to all!

Question: at CNN, is there any distinction—whatsoever—between being a "correspondent," which might imply a certain degree of objectivity, and being an unabashed liberal partisan?

Apparently not, judging from the comments of prominent CNN "correspondent" Abby Phillip on this morning's New Day.

Phillip described the election of Barack Obama as "progress" for America, whereas the election of Donald Trump was "a couple of steps back," with the "pendulum swinging" in the wrong direction.

Phillip followed that bit of blatant liberal punditry by describing the prospective election of Kamala Harris as VP as "a thrilling moment." Shades of Chris Matthews' famous thrill up his leg over Obama. 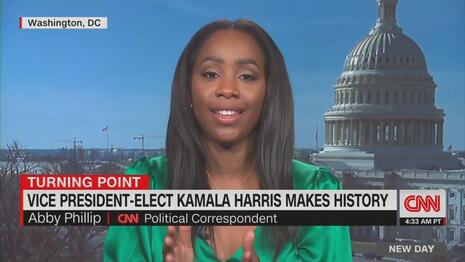 Phillip seems to assume that people think alike according to their biology or skin color. In fact, there will be many conservative women, black Americans, and South-Asian Americans not thrilled at all by the elevation of Harris, who like Obama before her was the most liberal member of the Senate, to the left of even avowed socialist Bernie Sanders.

Note also Phillip predicting that Harris will change the vice-presidency "in a lot of profound ways." From a conservative perspect, that sounds downright ominous!

ABBY PHILLIP: I think often in this country you make some progress, and then you take a couple of steps back. That has happened before. I mean, in fact, we elected the first black president, and followed that up with the person who doubted whether he was born in the United States. So sometimes there is this pendulum swinging that happens.

JOHN BERMAN: Abby, it was such a historic year, really. It blows your mind to think back on how much happened. Sometimes, we forget when something happened that really was also truly historic, which is that we have the first black woman as vice-president-elect. That’s a big deal! Kamala Harris here is breaking all kinds of barriers, all at once. Just reflect on the significance of this.

PHILLIP: Yeah, I mean, it’s such a good point that with all of the stuff going on, it’s hard to miss the big thing that I think will go down in the history books as having never been done before.

And I think particularly for women. The idea that, finally, this country has elected to one of the top two positions in the entire nation, and some might say in the entire world, a woman for the very first time.

It’s I think for some people a little depressing that it’s taken so long, but it’s a thrilling moment. Especially for those who might have wanted Hillary Clinton to break that glass ceiling four years ago. Look, Kamala Harris is going to be changing that role in a lot of profound ways.