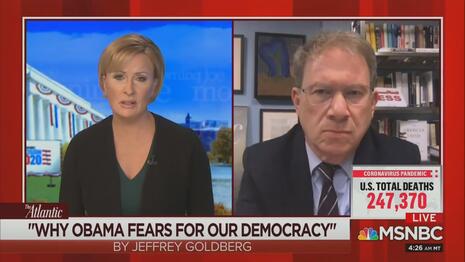 Social media giants blocking or restricting conservative voices, from President Trump on down, is rampant. In contrast, at their recent Senate committee appearances, Mark Zuckerberg and Jack Dorsey struggled to name a single liberal voice that Facebook or Twitter had censored.

But even that total imbalance in censorship isn't enough to satisfy the left's thirst to suppress conservatives. On Morning Joe, playing off Barack Obama's 60 Minutes interview in which he blamed social media in part for "truth decay," Mika Brzezinski talked to The Atlantic's editor-in-chief Jeffrey Goldberg about his own interview with Obama, where he bemoaned social media's supposedly insufficient censoring of conservatives.

Brzezinski claimed that leaving conservatives uncensored on Facebook was "very dangerous," while Goldberg fretted that conservatives being left "unchecked" leads to "serious problems."

Could Goldberg or anyone else possibly doubt that the algorithms Twitter, Facebook, etc. employ push liberal views and repress conservative sources?

Once again, liberals are revealed for the hypocrites they are. The only kind of "diversity"  they care about is that related to identity. When it comes to political and cultural views, diversity in the form of conservative philosophy is something to be suppressed at all costs!

PS: The left's ghoulish fantasizing about Trump continues. On Saturday, we caught guest-host Tiffany Cross on MSNBC's AM Joy show imagining President Trump "dragged out on the White House lawn." This morning, Mika fantasized Trump as a dying fish, "flailing" on the dock until he "dries up."

MSNBC calling for more censorship of conservatives was sponsored in part by Liberty Mutual and Chevrolet.

BARACK OBAMA: Maybe most importantly, and most disconcertingly, what we've seen is what some people call truth decay. Something that’s been accelerated by outgoing President Trump. This sense that not only do we not have to tell the truth, but the truth doesn’t even matter.

MIKA BRZEZINSKI: Actually, I think that's at the bottom, at the root of all this. Former President Obama, in an interview with 60 Minutes as his new book comes out tomorrow.

Editor-in-chief at the The Atlantic magazine Jeffrey Goldberg also landed his own exclusive interview with the former president [how can it be "exclusive" if 60 Minutes had one, too?]

He joins us now with his new piece entitled, "Why Obama Fears for Our Democracy." And Jeffrey, why don’t We start right there? Truth decay. I see that happening on a number of levels. Right now, if you turn on different news organizations, they’re not delivering news, they’re delivering disinformation, depending on who you’re watching. And that’s really growing, spreading, and then just land flatly on Facebook, where I feel a growing number of Americans just get their information there and that’s truth. And it seems to me to be very dangerous.

JEFFREY GOLDBERG: You know, it is. It is very dangerous and, you know, he has — President Obama has very specific words for social media companies. He says they’re not to blame entirely for this truth decay as he calls it. They’re not to blame for every ailment in our political system. But he says that the time is past due for them to start acknowledging that they’re not, as they often argue, they’re not just the phone company, right? That they’re not just carrying messages back and forth between people. That embedded in the algorithms are editorial choices, that's the way he put it to me. I thought it was a very good way to put it. That Facebook and other companies are sorting information and pushing certain kinds of information and repressing other kinds of information. And so, they play a civic role that they’re not playing now. But that’s an accelerant, as he says or something that exacerbates a deeper problem which is cultural norms, right?

And in his book, I mean, one of the interesting things about his book is that he traces his gradual awakening that something different is occurring in this country and he puts the — you know, he says Sarah Palin is the first indicator of this in 2008.

GOLDBERG: He watched McCain’s crowd size — not to harp on the crowd size, which is an issue we always talk about these days. He saw McCain’s crowd size, saw Palin's crowd size and, saw that she was appealing to a different kind of emotional impulse. Nativism and [inaudible], and said, something is going on here. And only later did we realize that left unchecked, and accelerated by social media, and by another media ecosystem, you know, this leads to — this leads to some serious problems.