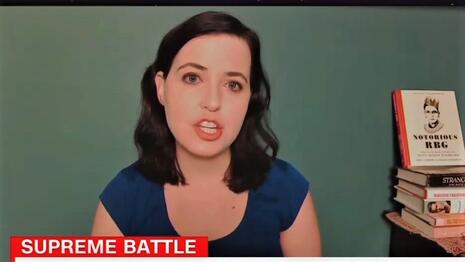 It's easy to play clips of Republicans inveighing against confirming a successor to Antonin Scalia in an election year, and CNN's New Day was certainly doing that on Monday morning, hyping the hypocrisy. They did not acknowledge you can also play clips from the left -- including from Justice Ginsburg herself -- that show an opposing hypocrisy. CNN skipped those.

But this line was the sharpest attack on the facts: Irin Carmon, the New York magazine writer, arch-feminist CNN contributor, and author of the Ruth Bader Ginsburg fangirl book Notorious RBG -- placed behind her left shoulder on screen -- claimed it was their job "as journlalists" to rip the Republicans for hypocrisy. She added if Republicans had a sense of shame,

"We certainly would not have a Justice Brett Kavanaugh, after Christine Blasey Ford testified."

As analysts, I think it’s important to note that if the politics of shame worked on Senate Republicans, calling them out for hypocrisy, then we would have a Justice Merrick Garland. We certainly would not have a Justice Brett Kavanaugh, after Christine Blasey Ford testified.

Seriously? Republicans should be ashamed to have confirmed Justice Kavanaugh in light of Christine Blasey Ford's testimony? Blasey Ford, among the weakest, least-credible witnesses in Supreme Court confirmation-hearing history?

If anyone should be ashamed about Blasey Ford, it is Carmon, and the Democrats who attempted to use her to smear Brett Kavanaugh as a rapist and crush his confirmation.

When Antonin Scalia died, Carmon said on MSNBC that "he's somebody whose jurisprudence certainly left out in the cold, as you say, many historically oppressed people."