Just as the liberal media greet Antonin Scalia as some sort of Supreme Court supervillain, they lionize Ruth Bader Ginsburg as a superhero. A gushy new book spinning off of the Internet meme of the “Notorious RBG” is making a splash in the liberal media. Jennifer Senior in The New York Times hailed it as “an artisanal hagiography, a frank and admiring piece of fan nonfiction.”

Notorious RBG, with its earnest superhero framing, reads like a Nancy Drew novel itself: “After years of toil, often in the shadows, she is poised to explain to the country just what is going wrong.” It’s an Honest Abe tale for the 20-something set.

Senior also ended by comparing Ginsburg to the Mona Lisa, "whose likeness has also launched a thousand fanciful appropriations."

TOTENBERG: Like any Tumblr, the Notorious R.B.G. allows people to post pretty much anything and do it anonymously. And so was that Shana Khiznik, enraged by a Supreme Court ruling gutting the Voting Rights Act, created a tribute Tumblr for the equally furious dissenter in that case, Justice Ginsburg. #TheNotoriousRBG soon took off like a bobsled on ice, and Ginsburg heard about the Tumblr.

As we have previously observed, there's barely any degree of separation between the feminist reporter and the feminist justice. Ginsburg officiated Totenberg's second wedding to surgeon H. David Reines in 2000. Totenberg hosted "her longtime friend" Ginsburg for a conversation at George Washington University in 2010, and in 2012, Totenberg gave the tribute to Justice Ginsburg at Glamour magazine's Women of the Year awards: Ginsburg "quite simply, changed the world for women."

Now NPR promoted MSNBC national reporter Irin Carmon (talk about a "furious dissenter" for feminism and abortion) and her co-author Knizhnik. Why compare the liberal justice to the assassinated rapper Notorious B.I.G.? 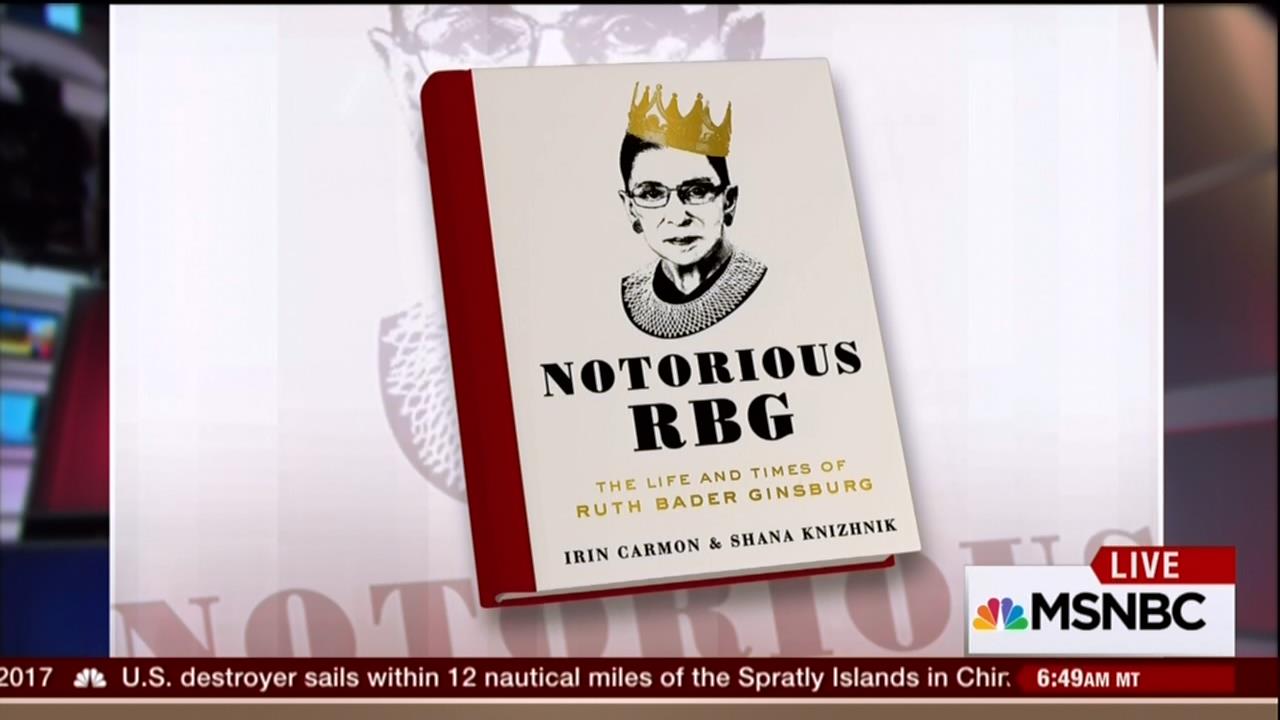 KNIZHNIK: The humor is in the contrast. It's this 80-something-year-old woman - small Jewish grandmother - contrasted to this larger-than-life persona that was Notorious B.I.G. They have something in common in that they are both from Brooklyn. And also, I think they both speak truth to power and can pack a verbal punch.

NINA TOTENBERG: Shana Knizhnik created the Notorious R.B.G. Tumblr when she was still a law student at NYU. Now she and Irin Carmon, an MSNBC reporter, have written a graphic nonfiction book about the iconic rise of R.B.G. - who she is, how she got to the Supreme Court and why young women want to be like her. Irin Carmon...

IRIN CARMON: I don't think the iconic status that she's achieved could happen without social media at all because I think the Internet has given young women an opportunity to choose our own heroes. The hero that so many young women chose was this 82-year-old grandmother, and I think part of that is because there's this desire on the Internet to find something that feels authentic and real and raw.

But what about the "many young women" who aren't feminist Democrats? Did Totenberg ever note Ginsburg is a hero mostly among liberals? Actually, this is the only time in the story that ideology surfaces: the reassurance that Ginsburg was "underestimated" as not radical enough:

IRIN CARMON: One thing that we learned while we were writing the book was that she's been underestimated her whole life.

NINA TOTENBERG: Some thought her not radical enough, not liberal enough, too female, too much a mother. Some called her dull, her writing not intellectual enough according to Carmon.

IRIN CARMON: She's proven all of those myths wrong. So I think a lot of young women know what it's like to be underestimated in that way, and they're inspired by the fact that she has so much integrity in who she is.

In addition to the rave book review, Carmon also had an op-ed in The New York Times titled "Justice Ginsburg's Cautious Radicalism."

On Tuesday morning, Knizhnik and Carmon appeared at the end of MSNBC's Morning Joe to promote the book, and Carmon gushed about the "international phenomenon" of Ginsburg and the repeated Saturday Night Live segments on "Weekend Update".

We wanted to take that enthusiasm and that excitement and tell people more about Justice Ginsburg’s life and the causes that she’s committed to and how much she's committed to gender equality and social justice for all....I think she has conducted herself with both integrity and fierceness, and I think just the force of her reason and the fact that she’s spent her entire life fighting for women, and people realize that.

“What a wonderful book: The annotated dissents! The knockout photos! Why she likes to write through the night! The litany of big cases she won as a lawyer, and how she picked them! How she made Bill Clinton cry! Notorious RBG is a laugh-out-loud joy to read.” -- Rachel Maddow, MSNBC

“This breezy, fun and thoughtful take on the life of the Justice explains exactly why a new generation created and embraced the Cult of Ginsburg.” -- Jeffrey Toobin, CNN

PS: Rolling Stone interviewed the authors and asked how Ginsburg felt about the 2016 election. Carmon replied: “She said to Nina Totenberg, "I'm very optimistic about 2016'....she's saying she thinks a Democrat is going to win. She would never say it, but I believe she would be very happy if the first woman president appointed her successor.”

PPS: Can you believe they actually sell a pro-RBG onesie for these abortion fans? 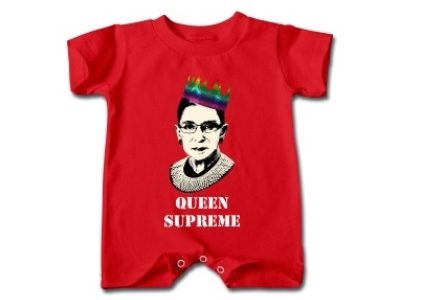