Phony 'Non-Partisan' Project Aims to Gin Up a Biden Landslide

If ever there were a left-wing partisan, it would be Rosa Brooks. Her leftist resume includes serving as special counsel in George Soros's foundation. She also held two different jobs in the Obama administration. And as I chronicled back in 2006, she was a virulent hater of then-President George W. Bush, analogizing him to Hitler, and enumerating the various ways in which she hated everything he did and stood for.

So it is nothing short of a fraud upon the public when Brooks and her comrades try to pass off as "non-partisan" a "project" she has devised whose clear aim is to stampede voters into handing Joe Biden a landslide victory.

Brooks's so-called Transition Integrity Project has war-gamed four different election scenarios. In three of them, President Trump illicitly schemes to hold onto power. The only scenario guaranteeing "integrity" in the transition, and avoiding a "constitutional breakdown," is the one in which Biden scores such a smashing win in both the popular vote and the Electoral College that Trump is helpless to overturn it.

Lefty Ed Luce of the Financial Times appeared on Thursday's Morning Joe to promote the "Project." Luce himself has collaborated on the Project's work. Further proof that its self-conferred "non-partisan" label is a sham.

Luce and Joe Scarborough combined to give away the Project's true aim. Scarborough said that the Project's exercises are "extraordinarily important, just so that Americans can go into the fall with their eyes wide open."

Luce agreed: "forewarned is forearmed," and the Project will help people see what will happen, "so we're better able to anticipate and prevent them from happening."

Translation: give Biden an overwhelming victory, or else we're headed to the catastrophe of a "constitutional breakdown!" Indeed, the very title of Luce's column, "How America could fail its democracy test," implies that Americans fail the democracy test if they don't hand Biden a big win.

Note that in the "good" scenario in which Biden wins a smashing victory, after leaving office the Project imagines Trump getting "Saudi funding to launch MAGA TV." Luce must have been thinking of Jimmy Carter, whose Carter Center was funded with "tens of millions" from the Saudis.

Note also that Brooks's co-founder of the Project is one Nils Gilman. He holds three university degrees, all from Berkeley—that hotbed of non-partisanship. Gilman works at the Berggruen Institute, whose goal is to promote American's transition from capitalism. Gilman has written a long article proposing, in place of capitalism, something he calls "mutualism." He describes it as a system in which [emphasis added] :

"ensuring the fair distribution and deployment of wealth becomes a central function of the state. We believe that predistribution means addressing wealth inequality not only with redistributive policies but also via the direct public ownership of wealth-generating assets."

Yup, what could be more "non-partisan" than destroying capitalism and replacing it with the kind of redistributionist utopia he proposes? 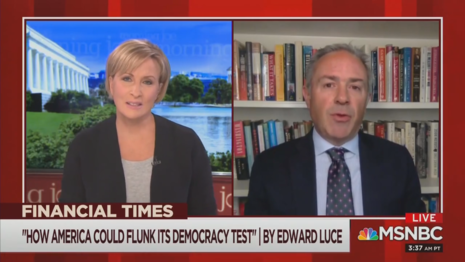 MIKA BRZEZINSKI: Joining us now is US national editor at the Financial Times, Ed Luce. He is out this morning with a new piece, entitled, How American Could Flunk Its Democracy Test.

And Ed, some would say we already have. But take us through your theory.

ED LUCE: Well, this is based on exercises I did with a group called the Transition Integrity Project. It's a non-partisan group that conduct, much like the Pentagon does war games. They do electoral war games. And they have four scenarios for this November election. Three of which ended up in a constitional breakdown by January. This is equally divided, the players, between Republicans and Democrats. I participated in one of them, and it was extraordinary to see how in those three-out-of-four cases, President Trump simply refusing to leave office, and using the awesome powers at his disposal, to federalize the National Guard for example. Deploy Bill Barr to contested states like Wisconsin, Michigan, and so forth to stop recounts. Trump would be prepared to use those amazing powers at his disposal.

JOE SCARBOROUGH: Well, Ed, we have long believed, conservatives I think, that you hope for the best, you plan for the worst. So these exercises are extraordinarily important, just so Americans can go into the fall with their eyes eye open.

LUCE: I think forewarned is forearmed. This Project: it's a very important Project, set up by Rosa Brooks of Georgetown, and Nils Gilman of the Berggruen Institute This project is not an exercise in prediction or forecasting. It's taking us through exercises so we’re better able to and prevent them from happening . . . It's very interesting, the fourth of those scenarios the Transition Integrity Project conducted, the one that didn't result in constitutional breakdown, which was where Biden wins very clearly--both the Electoral College and the popular vote. Trump still doesn’t want to quit office, until the President-elect Biden offers him a blanket pardon. At which point Trump leaves office and gets Saudi funding to launch MAGA TV.