No wonder President Obama adopted some of the language of the Occupy movement in his class-warfare speech this week.  It's led by the likes of Alfredo Carrasquillo, a fellow "community organizer" with whom the president perhaps identifies.  Carrasquillo specializes in breaking into foreclosed homes to dole them out to people—beginning with himself—to live in.

Chris Hayes gave Carrasquillo a sympathetic platform on his MSNBC show this morning. Making it clear that he was speaking as a "devil's advocate," not, God forbid, expressing his own opinion, Hayes gently inquired of Carrasquillo whether, you know, it could be said he has no right to break into and live in homes owned by others.   Dismissing the notion out of hand, Carrasquillo described theft of others' property as "technicalities."  That seemed good enough for Hayes, who helpfully pointed out that the homes Carrasquillo is breaking into "are just sitting there, no one's making use of them." Video after the jump. 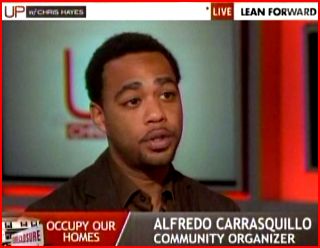 Watch the kid gloves with which Hayes treats someone who might better be called a "criminal organizer."

CHRIS HAYES: And, and, and, I want you to respond to, I think, to play devil's advocate for a second, right?  Folks may be watching at home or heard the story say: this is America. If you want a home you should save up and you should buy a home, and that home is owned by Bank of America.  You have no right to be in it. What's your response to people who say that?

ALREDO CARRASQUILLO: My response is this: that Bank of America has basically been one of the biggest criminals in history.  I mean, they've been basically foreclosing on homes, forcing families that are working hard trying to provide for their children, forcing them to be homeless and out on the street. There's more vacant homes than there are people on the street.  Right is right, wrong is wrong. And ultimately, these homes need to be filled with families that need them. And that's all there is to it. There's always technicalities involved in it.  But the fact of the matter is if there's empty homes, they should be filled with families that need them.

HAYES: You said there are 70 foreclosed properties on that block.  They are just sitting there, right? No one's making use of them.