Zbigniew Brzezinki's indictment of the United States was so harsh—calling America "one of the most socially unjust societies in the world"—that even his own daughter Mika was taken aback, asking her father to explain himself.

But that didn't stop Andrea Mitchell from emphatically agreeing with Zbigniew Brzezinki's condemnation of the USA.  In the course of doing so, Mitchell called the Tea Party  and opposition to ObamaCare "exaggerated forms" of protest, while praising Occupy Wall Street as "a real movement." Video after the jump. 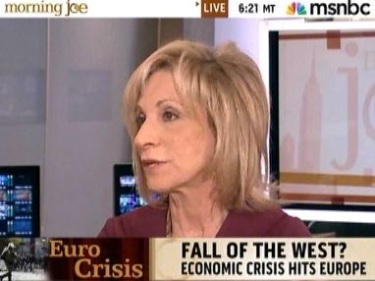 ZBIGNIEW BREZINSKI: The West today is somewhat corrupt, uneasy about its own value system.  The United States is becoming rapidly one of the most socially unjust societies in the world. And that is raising basic questions about the relevance of the West to a world that is now universally awakened.  Stirring, restless, conflicted.

SCARBOROROUGH: Yeah, explain how the United States of America --

MIKA: It's a strong statement.

ZBIGNIEW: The income disparities between the rich and the poor in the United States are now the most severe in the world . . .

ANDREA MITCHELL: I agree with just about everything that Dr. Brzezinski has said, except that I'm not as optimistic as you are about the Eurozone [Brzezinski had predicted that Europe will solve its financial crisis]. The disparities between rich and poor is this country are the underlying tension.  You see the exaggerated forms of it on both sides. With what we saw with the Tea Party, the objection to a social compact on health care a couple of years ago.  And then, the emergence of the Occupy movement.  That's a real movement.  There is real passion and anger there.


Note that whereas Mitchell claims to see "exaggerated forms" of protest on "both sides," she only cites the Tea Party and resistance to ObamaCare as examples of the phenomenon, while praising Occupy Wall Street as being a "real" movement.