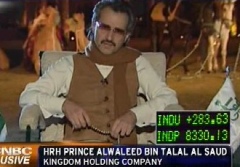 CNBC's Bartiromo conducted the interview by remote this afternoon. When the camera went to the prince in Riyadh, you might have expected to find him in a TV studio, or perhaps in his business office, maybe even in one of his palace rooms.  But no, there he was sitting outdoors, apparently by his stables, with seated camels and sleek horses very visible in the background.   And rather than being attired in business or traditional Saudi dress, the Prince was duded up with an open collar, tinted glasses and a scarf warding off the desert's cool night air.  He could be seen occasionally fingering what appeared to be golden worry beads.

The conversation began with the prince expressing his views on current and past Citi management: Alaweed expressed great faith in current CEO Vikram Pandit and put much of the blame for the company's woes on former CEO Charles Prince. He was optimistic that the current moves by the US government to shore up Citi would restore confidence in the company.  Although he is not an investor in the auto industry, Bartiromo elicited his views on the potential Detroit bailout. Alwaleed said this would be up to "President-elect Barack Obama," emphasizing the need for strict standards for any bailout.

The prince expressed himself emphatically and with flair.  When Maria threw it back to the NYC studio, the host remarked: "one of the world's highest-profile investors and certainly one colorful character, I think we all agree on that, as well."

Go for it, SNL.  You don't have Sarah Palin to stereotype anymore.  Bring back Tina Fey as Maria, perhaps.  And as the prince, I could see Dana Carvey, if he's available, or why not Mike Myers? 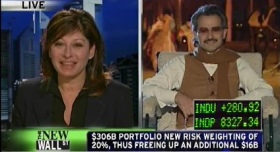 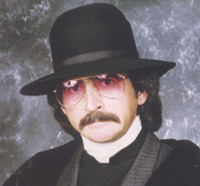 Was this an example of great minds thinking alike, or had the folks at Morning Joe read this item?  This morning, a number of them picked up on the SNL theme regarding the Alwaleed interview.  Mike Barnicle wondered where SNL producer Lorne Michaels gets these people, and Chuck Todd and Willie Geist joked that Alwaleed is a dead-ringer for legendary SNL character Father Guido Sarducci.