Andrea on Obama Trip: 'What Some Would Call Fake Interviews'

Andrea Mitchell might be a doyenne of the liberal media, but she has her reporter's pride and principles, which have been trampled by the way the Obama campaign has managed the media during the candidate's current trip to Afghanistan and Iraq.  Mitchell let loose on this evening's Hardball, speaking of "fake interviews," and decrying that she was unable to report on pertinent aspects of the trip because the media has been excluded and that the video released is unreliable because it's impossible to know what has been edited out.

Before Mitchell made her displeasure known, Roger Simon of Politico, Chris Matthews's other guest during the segment, depicted the images coming out of the war zone as all Obama could have dreamed of.

ROGER SIMON: The optics are all very good on this trip. I mean, the beginning of this trip is so good, Senator Obama might just want to call off the end and just keep running the videotape.

He goes into a gym, everybody, all the service people there cheer. He shoots a basket, you know, it goes through the hoop. 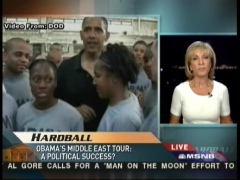 He's obviously standing there with troops, they seem to be liking him, smiling. They don't seem to feel that Barack Obama wants to desert them, to leave them in Iraq.  This is exactly what the Obama campaign hoped for, and this was supposed to be the tough part of the trip.  The meatiest part of the trip in Jordan and Israel may be tough in terms of foreign policy, but the back end of the trip to cheering European crowds will certainly be as good if not better than this. So I think he's feeling very good right now.

CHRIS MATTHEWS: Andrea, I want to get ethnic a little bit here --

ANDREA MITCHELL: This is message -- 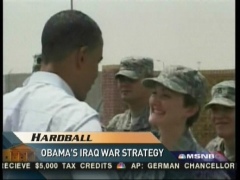 MITCHELL: Let me just say something about the message management.  He didn't have reporters with him, he didn't have a press pool, he didn't do a press conference while he was on the ground in either Afghanistan or Iraq. What you're seeing is not reporters brought in.  You're seeing selected pictures taken by the military, questions by the military, and what some would call fake interviews, because they're not interviews from a journalist.  So, there's a real press issue here.  Politically it's smart as can be.  But we've not seen a presidential candidate do this, in my recollection, ever before.

When Matthews inquired about the atmospherics of the trip, Mitchell made clear her frustration as a reporter.

MATTHEWS: Let me ask you about access to the troops, An 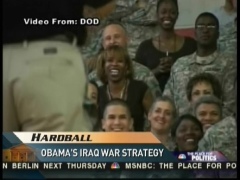 drea.  A lot of African-American faces over there, very happy, delighted faces.  Is that a representation of the percentage of servicepeople who are African-American, or did they all choose to join someone they like, apparently?  What's the story?

MITCHELL: I can't really say that.  Being a reporter who was not present in any of those situations, I just cannot report on what was edited out, what was, you know, on the sidelines.  That's my issue. We don't know what we are seeing.

Good on Andrea. Now, will the rest of the MSM press the Obama campaign to release the outtakes from the war zone?