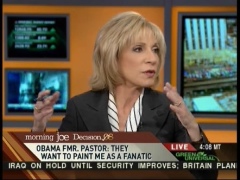 It is NBC Green Week, after all, so who can blame Andrea Mitchell for recycling two dilapidated defenses of the Rev. Jeremiah Wright?

Mitchell's heart didn't seem wholly in it, but like a burned-out public defender going through the motions, Andrea apparently felt constrained to mount some kind of defense of Rev. Jeremiah Wright's controversial remarks. And so she trotted out two hoary chestnuts:

Andrea is occupying the Mika Brzezinski Chair of Political Science on this week's Morning Joe. The show's first segment today focused on Rev. Wright's re-emergence, first in an interview with Bill Moyers to be aired tonight and of which snippets have been made available, and then in planned appearances before the National Press Club and the NAACP.

In one clip that was played, Rev. Wright implied to Moyer that America has "blood on its hands." The panel agreed that none of this can be helpful for Barack Obama. But Andrea did her best to limit the damage.

ANDREA MITCHELL: Well, I think, this comes out of a whole issue of the African-American church. The way preaching, the way preachers build a crescendo and then have it come down. And that's what he was also saying, and that's what a lot of people, critics of the way we all have handled this story say, that, taken out of context any one line or two from these long sermons sounds much more explosive than it really is. But if you look at the words, the words say what they say.

JOE SCARBOROUGH: I've been to a lot of churches. And I get kicked out of every church I go to, so I have experience across--

MITCHELL [jocularly]: That explains a lot.

Perhaps not for any African-American candidate, but certainly for one who sat in Rev. Wright's pews for 20 years, calls him his "spiritual guide," and continued to donate tens of thousands of dollars to his church despite his rhetoric.

Possibly abashed to directly adopt it, Mitchell resorted to the technique of putting her "taken out of context" claim in the mouths of others. Perhaps in a later segment Andrea will explain the proper context in which we should understand Rev. Wright's claim, for example, that the US government introduced AIDS as an instrument of genocide against African-Americans.

Note: see Matt Sheffield's item of this morning for some of that crucial "context." And last month, appearing on Morning Joe, Time editor Rick Stengel spoke of "the incredible ignorance of white Americans about what goes on in black churches."