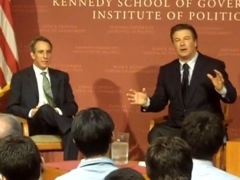 Baldwin dubbed Palin "caribou barbie," while Berke rehashed the former Alaska Governor's interview with Katie Couric during the 2008 campaign -- perhaps the left's favorite Palin-basing talking point. Baldwin went on to attribute Palin's success to a television news culture that sports women who look like they "just popped off the runway."

These demeaning comments marked the latest in the liberal elite's condescension of Sarah Palin -- condescension that would likely be condemned as outright sexism if directed at another prominent public figure. Videos of the exchange are embedded below the fold.

In fact, Baldwin did not himself devise the "caribou barbie" label. CNN's Jack Cafferty, the New York Times's Maureen Dowd, and ABC's David Wright have all used the term to demean Palin.

The "she's only successful because she's attractive" meme is also common in the legacy media's discussions of the former governor. Fox News contributor Juan Williams, for instance, called Palin a "centerfold" and explicitly said that her looks explain her appeal.