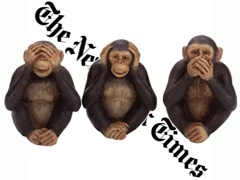 For much of the liberal media, President Obama operates in a vacuum. In their minds, if he says he will do something, he will most likely do it, even if he has a blatant record of not following through on similar promises.

Take Obama's lobbyist rhetoric, for instance. When the President claimed the White House has "excluded lobbyists from policymaking jobs" he was telling the truth, sort of. He did not mean, and his staff has confirmed this, that they've excluded all lobbyists from the process, as, you know, a reasonable person would gather. He just meant that some lobbyists that applied for jobs in his administration didn't get them.

As it turns out, there are over 40 former lobbyists working in the White House or some branch of the executive (see chart below the fold).

The New York Times today ran a glowing story on President Obama's upcoming crackdown on lobbyists, never once mentioning his duplicitous statement during the State of the Union.

On the contrary, the Times lauded the proposed regulations--which may limit campaign contributions from lobbyists and the amount of time one can discuss issues with policymakers on behalf of an organization before being legally considered a lobbyist--saying they "spawned cheers among environmental and watchdog groups."

The Times said the new regulations could "revolutionize how lobbyists disclose their activities and contribute money to candidates for federal office." The article touted the closing of loopholes and the rise in disclosures of legal information.

But in discussing the President's plans, the Times did not once note that Obama has been less than completely honest about his past promises concerning lobbyists. Indeed, though the Times mentioned the State of the Union, and Obama's hints at these reforms during his speech, it did not mention the obviously misleading statement that the Obama administration has "excluded lobbyists".

As you can see in the chart above, Attorney General Eric Holder, FTC Chairman Jon Liebowitz, CIA Director Leon Panetta, and the Vice President's Chief of Staff Ron Klain are all former lobbyists. They all hold positions of power. Doesn't that merit a mention in a story on yet more proposed regulations?

As the Washington Examiner's Tim Carney notes, by Obama's logic "we can say George W. Bush avoided wars in the Mideast (he didn't invade Iran), and Bush's father refused to raise taxes (repeatedly, for months)."

Carney adds that the President's rhetoric tells us something important: "That President Obama would say, 'we've excluded lobbyists,' when he really meant, 'we've included them, too,' tells us something more surprising: That he's willing to mislead us, as long as he's left himself a semantic back door to escape through if he gets called out."

Apparently the Times is willing to take Obama at his word. So much for investigative, truth-to-power journalism.