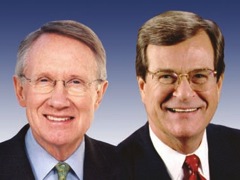 The Los Angeles Times has been doing its best to dismiss Senator Harry Reid's racist remark about Preisdent Obama as a minor transgression while portraying Republicans calling for his resignation as political attack dogs. This coverage stands in stark contrast to the paper's coverage of the controversy surrounding former Republican Senate Majority Leader Trent Lott in 2002 (h/t Patterico).

"GOP opens fire on Harry Reid," read a Los Angeles Times headline yesterday. The article said the Senator was "pummeled" by the GOP, that Republicans had "called for the senator's head," and that Reid was now "in [the GOP's] cross hairs." (The latest version of the story does not include the last quote.)

Contrast this Times story to the paper's own coverage of Trent Lott's remarks in 2002 and Democrats' calls for him to step down as Majority Leader. The Times portrayed the uproar over his remarks not as an attack, but rather as a spontaneous, impalpable furor. The uproar was a "spiraling controversy" or a "growing clamor." "Outrage Grows Over Lott Remarks" read one headline.

Patterico, who unearthed the glaring inconsistencies in the Times's reports, postulated in 2004, "When the paper disagrees with criticism of a [politician], it is portrayed as an attack by political opponents. When the paper agrees with the criticism, the criticism becomes a mysterious and disembodied (but ever-growing) entity. Doubts grow. Criticism emerges." The Times's coverage certainly fits this characterization.

The Times also made sure to quote some of Reid's colleagues without any careful examination of their statements regarding the Lott controversy. Sen. Diane Feinstein, who in 2002 said Lott's remarks cast into doubt his "ability to be a credible party leader", is quoted in the Times's article saying, "First of all, all of us are imperfect. … Clearly, this was a mistake. Clearly, the leader misspoke. He has also apologized. … The president has accepted the apology, and it would seem to me the matter should be closed."

But even after Lott apologized for his comments, and insisted that they had been misinterpreted, the Times called for the resignations not only of the Majority Leader but also of Democratic Senate Minority Leader Tom Daschle. "The head of the party of Lincoln in the Senate makes a racist remark and the head of the Senate Democrats, Sen. Tom Daschle (D-S.D.) makes excuses for him… Shame on both Lott and Daschle! They should resign in favor of people who understand what it is to lead," read a Times editorial.

The nature of the Lott/Reid comparison provides a valuable case study in media bias as the circumstances surrounding the controversies are similar--two Senate Majority Leaders making racially insensitive remarks and coming under fire for them--but the two central actors are of the opposite parties. A good scientific study has only one variable (though politics is far from an exact science). Controlling for other factors, we can deduce that differences in the Times's coverage in these cases appear the result of party affiliation.
Political Scandals Congress Race Issues 2008 Presidential Labeling Liberals & Democrats Conservatives & Republicans Culture/Society Double Standards Racism 2010 Congressional Los Angeles Times Government & Press Trent Lott