While all three broadcast network shows on Tuesday hyped Donald Trump’s former attorney Michael Cohen preparing to testify before Congress throughout the week against the President, amazingly, ABC’s Good Morning America completely skipped any mention of the convicted felon’s massive credibility problems and that he previously lied to Congress.

Despite dodging Cohen’s dishonesty, co-host George Stephanopoulos proclaimed: “...in that public testimony tomorrow, Cohen expected to take us behind the scenes with Donald Trump. He calls it a history of lying, racism, and cheating.” Correspondent Mary Bruce emphasized the same allegations: “Michael Cohen is about to pull back the curtain on President Trump, detailing what he says are these personal anecdotes, his first-hand accounts of how the President, he says, lied and cheated throughout his career.”

Again, Cohen’s own “history of lying” was not mentioned during the segment.

Bruce breathlessly added: “And George, for the first time publicly, sources tell us that Michael Cohen plans to accuse the President of criminal conduct while in office.” Stephanopoulos reiterated: “While in office, that’s right. They are going to present evidence, they say, documenting – at least one document which they say shows the President broke the law while in office.”

Of course, the Democratic operative turned anchor has experience working for a president who committed a crime while in office, after his old boss Bill Clinton lied under oath about having an affair with White House intern Monica Lewinsky.

As GMA avoided acknowledging what a questionable witness Cohen was, both CBS This Morning and NBC’s Today show managed to include such skepticism in coverage of the Capitol Hill hearings.

During her report for CBS This Morning, correspondent Nancy Cordes worked in two mentions of Cohen’s lack of credibility:

> And senators are not inclined to go easy on a man who lied to Congress the last time he was here. This committee wants to know why he misled them about President Trump’s 2016 pursuit of a big Moscow real estate project. Did someone tell him to lie?

> Now, Cohen has been sentenced to three years in prison. He’s set to be incarcerated in May. And he’s been working with federal prosecutors and looking for ways to get his sentence reduced. So senators hope that will give him some incentive to be more truthful to them this time....they know he is a flawed witness, but he is still one of the people who knows Donald Trump’s business background best.

HODA KOTB: Criminal conduct? Former Trump lawyer and confidant Michael Cohen ready to make a stunning claim on Capitol Hill. A source telling NBC News he’ll provide evidence the President broke the law while in office. So what will he say? What is the evidence? And how credible is he as a witness when he’s already admitted lying to Congress? We’re live at the White House.

KRISTEN WELKER: It is high stakes as Michael Cohen heads to Capitol Hill today, his appearance, the first of three this week, will be behind closed doors before the Senate Intelligence Committee. That’s the committee he lied to when he first testified on the Hill 18 months ago.

WELKER: Cohen also expected to be grilled on his previous false statements about working on building a Trump Tower in Moscow well into the campaign. The President has consistently insisted there was no wrongdoing.

WELKER: The President’s former so-called fixer was sentenced in December to three years in prison for financial crimes and lying to Congress. Now, as he prepares to head back to Capitol Hill, Cohen facing skeptical lawmakers.

SEN. JOHN KENNEDY [R-LA]: He’s already lied to Congress once. Now, I know he says he’s been born again and all of that, but I don’t know how you separate fact from fiction with Mr. Cohen.

KOTB: And that’s the point right there, the Republicans are likely gonna say that Cohen has a big credibility problem, he lied to Congress in the past. So what’s Cohen saying about that?

WELKER: There’s no doubt about that, Hoda. Look, Cohen’s credibility issues will be under a microscope. But when he flipped on the President, Cohen said his allegiance is no longer to Mr. Trump, but rather to his family and the country.

CRAIG MELVIN: Meanwhile, President Trump’s former personal lawyer, Michael Cohen, kicks off a three-day gauntlet of congressional appearances today by giving a closed-door interview to the Senate Intelligence Committee. Cohen expected to detail he claims to know about Trump’s contacts with Russians and other sensitive matters as well. No topics are expected to be off limits today. Cohen set to serve prison time for lying to the committee back in 2017.

WELKER: Now, today’s hearing is significant, but it is behind closed doors. So expect big fireworks tomorrow, when Cohen testifies publicly. Republicans will undoubtedly grill Cohen on the fact that he lied to Congress when he first testified 18 months ago.

Any coverage of Cohen’s congressional testimony must include some disclaimer for viewers that the ex-lawyer has major credibility problems. Good Morning America could not meet that basic standard of journalism.

Here is a transcript of the February 26 report on GMA:

GEORGE STEPHANOPOULOS: President Trump’s summit just half of a dramatic split screen moment. As he sits down to dinner with Kim Jong-un Wednesday, his former fixer, Michael Cohen, will be center stage in Washington. Three days of congressional testimony kick off today. Our Senior Congressional Correspondent Mary Bruce is tracking it all. And Mary, in that public testimony tomorrow, Cohen expected to take us behind the scenes with Donald Trump. He calls it a history of lying, racism, and cheating. 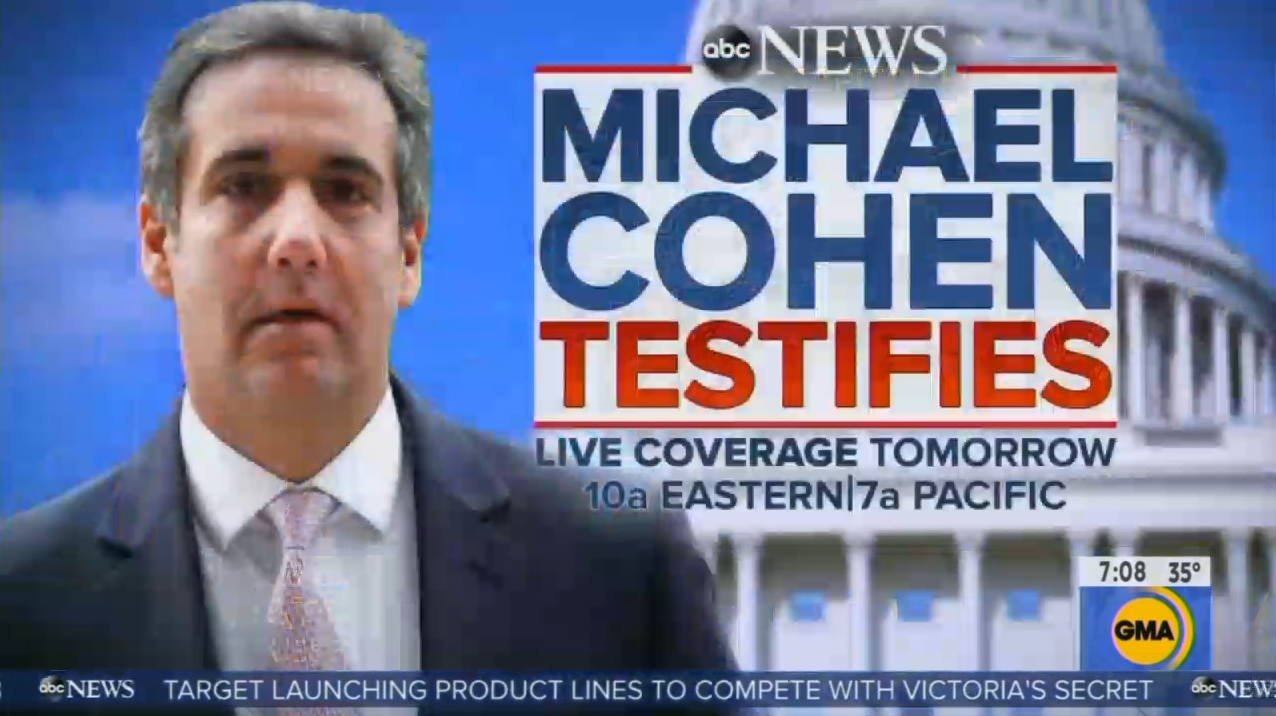 And George, for the first time publicly, sources tell us that Michael Cohen plans to accuse the President of criminal conduct while in office.

STEPHANOPOULOS: While in office, that’s right. They are going to present evidence, they say, documenting – at least one document which they say shows the President broke the law while in office.

The biggest bombshells expected to be around those hush payments to Stormy Daniels and Karen McDougal.

BRUCE: Exactly, George. Because remember that Michael Cohen implicated the President in a federal crime when he told prosecutors of those hush money payments that were made. The President has said that he denies these alleged affairs, that he didn’t direct Cohen to arrange these payments, but now, Michael Cohen will have a chance and a public stage in which to tell his side of the story.

STEPHANOPOULOS: And the prosecutors have said that is a matter of fact.

STEPHANOPOULOS: Mary Bruce, thanks very much. I’ll be anchoring our live coverage of Michael Cohen’s public testimony, along with our whole political team whole team, that’s tomorrow at 10:00 Eastern.