On Thursday, all three network morning shows gleefully seized on Donald Trump’s abortion comments during a Wednesday MSNBC town hall to boost Hillary Clinton, declaring the remarks to be the “perfect” “gift” for the Democratic frontrunner.

Wrapping up a report about the controversy on ABC’s Good Morning America, correspondent Cecilia Vega touted: “Well, it didn't take long. Hillary Clinton is already turning these comments into a fundraising tactic, sending an e-mail to supporters saying, quote, ‘Donald Trump wants to punish women for making our own health care decisions.’”

Minutes later, fill-in co-host and World News Tonight anchor David Muir asked political analyst Matthew Dowd: “Was this a gift for the Clinton camp?” Dowd gushed: “Oh, it was a gift wrapped with a bow and everything sparkles all over it. It was perfect for them.”

On NBC’s Today, correspondent Peter Alexander proclaimed: “Hillary Clinton accused Trump of leading an assault on women’s rights.” Two soundbites followed of Clinton on the attack: “What he said today is just among the most outrageous and dangerous statements that I’ve heard anybody running for president say in a really long time....When it’s all stripped away, so much of the Republican agenda is to turn the clock back on women. Make no mistake about it.”

In addition to promoting Clinton’s candidacy using Trump’s abortion comments, Today similarly employed the GOP contender’s remarks on nuclear weapons to portray Clinton as strong on foreign policy. In a two-minute segment devoted to the topic, correspondent Andrea Mitchell declared: “Trump has raised eyebrows in this interview with CNN, saying he supports allowing other countries to go nuclear, even on the volatile Korean peninsula....Prompting this sharp rebuke from Hillary Clinton with Rachel Maddow Wednesday night.”

The soundbite ran of Clinton telling Maddow: “So we’d have an arms race under his theory, not just in the Middle East, but also in Asia. I have no idea what that means, other than it scares me and it scares a lot of thoughtful leaders around the world.”

Talking to Maddow moments later, co-host Matt Lauer observed: “But on the nuclear issue, Secretary Clinton also – this goes to the ability to be commander in chief. And Secretary Clinton said that she is hearing from world leaders who are privately expressing concerns about this.”

Yes, this was remarkable and this was unprompted. I asked her, you know, how do you think a President Donald Trump would play with world leaders? And she said, “Well, we already know because I'm hearing from them privately, getting asked about them, basically what in the world does this mean for the United States and for your politics?” She brought it up then again, a second time in the interview. So it’s clearly something that is an important part of how she's thinking about how he would affect our standing in the world.

Here is a full transcript of Muir’s March 31 discussion with Dowd on GMA: 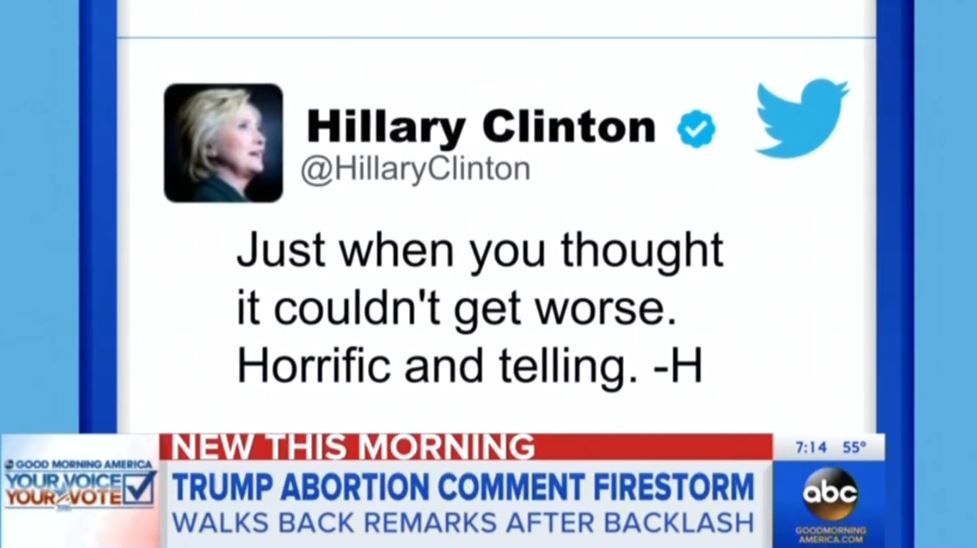 DAVID MUIR: We’re want to get more on the race for the White House this morning. ABC's Matthew Dowd’s been listening in on this conversation with Governor Kasich. And, Matt, as you know, Donald Trump has said a lot of things in this campaign along the way. Critics pouncing every single time, saying, “This is going to be the thing that hurts Donald Trump.” But was this different?

MATTHEW DOWD: Well, when you run a seat-of-the-pants campaign sometimes the pants wear thin and you get exposed. And in the course of this, I think Donald Trump – it's a cumulative effect, David – and I think this is another thing, a big thing I think, a big problematic thing in the course of what happened yesterday that is a cumulative effect that weighs him down. And the other part that’s different, I think, is we are in a moment now where we’re approaching April, we're getting close to the convention, and people are getting really serious about who they want to see as president. So as you make mistakes later in a campaign, it has a much more profound effect.

MUIR: We’re in the middle of a primary, you heard Governor Kasich with Robin there moments ago. But you also have a lot of people focusing on the general up against Hillary Clinton. You heard her there in Cecilia's piece, the immediate tweet after Donald Trump, “Just when you thought it couldn't get worse. Horrific and telling,” Hillary Clinton tweeted. Was this a gift for the Clinton camp?

DOWD: Oh, it was a gift wrapped with a bow and everything sparkles all over it. It was perfect for them. I mean, Donald Trump already has a problem for the general election. If you look at the voters who haven’t participated in primaries, he is viewed very unfavorably, especially by women. So for Hillary Clinton, if she's the Democratic nominee – obviously she still has a race with Bernie Sanders in the course of this – if she is, this is one more example where all she has to use is Donald Trump's own words in a commercial that will really harm him.

MUIR: Alright, Matt Dowd with us this morning. Matt, we always appreciate your insight.